Almost exactly a year ago I expressed my bearish attitude toward Caterpillar and offered an alternative industrial stock in Ritchie Bros. Auctioneers (NYSE:RBA). The latter has had a great three-year run, up roughly 85% over that time, and up 38% over the past 12 months alone. It's even outpaced Caterpillar, which has had a smaller rebound of its own.

Starting from the top

Revenue increased by 18% compared to the prior year, thanks to a 12% jump in quarterly gross auction proceeds (GAP). Revenue checked in at $128.9 million, which was a little more than $7 million ahead of analysts' estimates. Ritchie Bros.' business is seasonal, as you can see below, so a good way to track its progress over time is to view its trailing-12-month GAP. 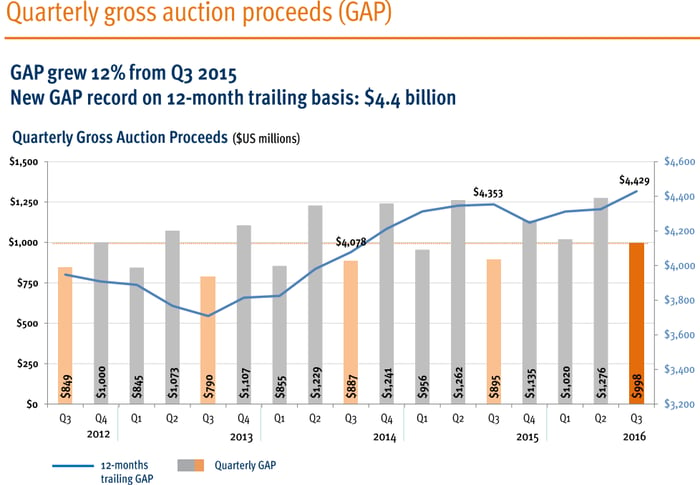 If you want a slightly more optimistic view of what earnings should look like going forward, focus on comparable earnings per share, which exclude both writedowns and acquisition costs, and checked in at $0.24. I'd suggest using Ritchie Bros.' adjusted earnings of $0.20, but each has its own value to investors.

The third quarter was really solid in just about every metric, as you can see below, with increases in consignors, lots, bidders, and buyers.

North America was a driving force behind the company's revenue growth during the third quarter, with the U.S. doing the heavy lifting. The geographic breakdown of Ritchie Bros.' revenue showed 56% of the pie coming from the U.S., up 300 basis points from the prior year. Canada also moved 300 basis points higher, to 28%, with Europe and other areas both declining to 8% of total revenue each, compared to 12% and 10%, respectively, during last year's third quarter.

What else is driving the stock higher?

It's no secret that the markets have been wildly volatile since Donald Trump's surprise victory earlier this week. Ritchie Bros. is benefiting from the ripple effect of Trump's promise to spend heavily on rebuilding America's infrastructure, which should spur more companies to purchase heavy construction equipment -- and what better place to buy that equipment than at Ritchie Bros.' auctions? OK, that was partially said in jest, but there's no doubt the company should indirectly benefit from increased infrastructure spending and demand for heavy equipment.

Ultimately, it was a pretty strong third quarter, even if acquisition costs and writedowns made it a little murky for investors to judge. The company seems poised to continue dominating a highly fractured industry, especially after acquiring IronPlanet, one of its major competitors, and simultaneously beefing up its online presence. If Trump holds true to his promise on infrastructure spending, it would be just icing on the cake for what should be a continued good run for Ritchie Bros.