If you're worried that the market is too expensive now, then you're not alone. It seems we can't go a single day without another expert predicting a stock market correction or even a full-blown recession. Fortunately, you don't need to worry about overpaying for the stocks you buy, because there's a smart strategy that guarantees you a favorable price.

Do you know exactly when your stocks will go up or down? Of course not. A stock that looks cheap today could easily fall further.

Because it's impossible to accurately time the market, a better solution is to use the principle of dollar-cost averaging in your investment strategy. Simply put, dollar-cost averaging is the practice of building a position in a stock over time by investing a fixed dollar amount at regular intervals. The result is that you'll buy more shares when the stock is cheaper and fewer shares when the stock is expensive.

Consider this simplified example: Let's say you want to buy Company XYZ, which is trading for $40 per share, and you have a total of $3,000 to invest. Instead of investing the entire $3,000 now, you buy $1,000 worth of stock every three months until you've built your position.

So your first $1,000 would buy 25 shares at the current share price. Then a major market correction hits, and the stock is trading for just $25 after another three months. That means your second $1,000 will buy you 40 shares. Finally, let's say the market recovers and then some, and your stock now trades for $50, so your last $1,000 investment will add another 20 shares to your position.

Here's why this is a great strategy.

Across the three different times when you purchased shares, the average share price was $38.33:

The mathematics of dollar-cost averaging guarantee that you'll get a better price for your shares than the average trading price on the dates when you buy them.

In fact, this is one of the basic principles of 401(k) investing. If you contribute a certain percentage of your salary, you're buying equal dollar amounts of the same investment funds at equally spaced intervals.

Things to know about dollar-cost averaging

There are some questions I frequently hear when explaining dollar-cost averaging. For starters, wouldn't it be better to just buy all of the shares at the lowest price?

Sure it would. It would also have been great to have bought Amazon.com for $8 per share in 2001 when the company was just an online bookstore, or to have bought Goldman Sachs for $47 in March 2009, at the lows of the financial crisis. Unfortunately, we don't have a crystal ball that can predict market movements.

There's no way of knowing what a stock will do next. In those two examples, Amazon.com could have turned out to be just another dot-com bust (believe me, there were plenty), and Goldman Sachs could have fallen much further if the economy had continued to sour.

Dollar-cost averaging removes the guesswork and guarantees you a favorable price for the stock you're buying. However, it's important to mention that dollar-cost averaging doesn't necessarily guarantee a good price for a stock. For example, if you buy shares in a failing company, it really doesn't matter how low you buy; you may still suffer losses. So you have to do your due diligence even when averaging into a position.

Another common question is "how long should I build my position?" The answer to this question depends on the particular investment and your goals. I've been averaging into a position in Berkshire Hathaway (NYSE: BRK-B) for years now, and I have no plans to stop, because I plan to keep my shares for decades. On the other hand, if you have a positive long-term outlook on a stock but also want to take advantage of short-term potential, then you can average in over a matter of a few weeks or months. For example, another stock I own, Bank of America (NYSE: BAC), dropped sharply earlier in 2016. My analysis told me this was unlikely to last long, but because I had no idea whether the stock would continue to fall in the short-term, this was a good opportunity to average into a position quickly.

The question of how often to buy shares goes hand-in-hand with this. And the answer also depends on the situation. I buy Berkshire Hathaway shares once every quarter, for example, and I tend to buy shortly after the quarterly earnings release in order to take advantage of any earnings-related dips. If I don't want to build quite as large of a position, then I might buy shares once per year. If I want to take advantage of a short-term buying opportunity, like the brief plunge in Bank of America stock, then I tend to average in once per month for just a few months.

Learning from my biggest loser

To illustrate the power of dollar-cost averaging, I'll turn to a chapter in my investing history that I'd sooner forget.

If you were actively investing in the stock market in 2008, then chances are you made an investment or two that didn't work out. Mine was First Solar (NASDAQ: FSLR), which to this day is the worst-performing investment on my record. 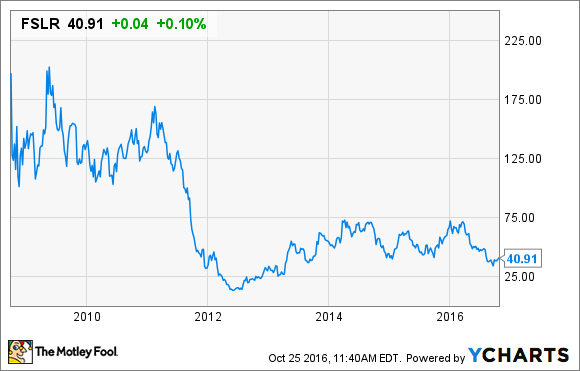 I bought my shares of First Solar in 2008 for just over $200. They had recently pulled back from more than $300, and I thought I was getting a bargain. After all, the financial crisis hadn't hit in full force yet, oil was trading for about $140 per barrel, and many analysts were calling solar "the next big thing." First Solar in particular was getting some bullish recommendations from the pros.

But in the wake of the financial crisis and collapsing oil prices, First Solar plummeted, finally bottoming out at $11.43 per share in 2012. As I write, First Solar has rebounded to about $35, but I'm still sitting on a loss of more than 80%.

When I originally bought First Solar, I saw it as an industry leader with massive long-term potential, and I still feel that way. However, I knew there were likely to be some growing pains along the way, since solar is such a young industry. Therefore, instead of buying my shares of First Solar all at once, let's say that I had decided to dollar-cost average into my position over a period of five years, investing $2,000 every June for a total of $10,000.

By using this strategy, I would own 213 shares at an average price of $45.03 -- far below the $142.11 average price when I made my investments. In this case, dollar-cost averaging would have let me take advantage of the 2012 crash in solar stocks, instead of just sitting on the sidelines in horror. 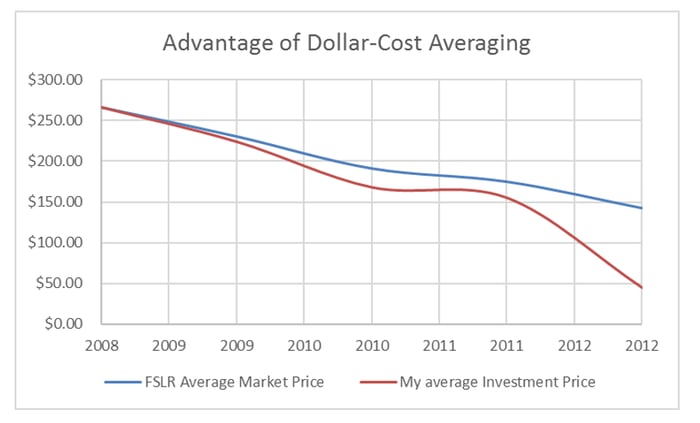 While that $45.03 average is still more than the current stock price, that's because of a recent correction in the solar sector. For most of the past three years, I would have actually been sitting on a nice gain. In fact, First Solar was above $45 per share until August. And even though I would still be in the red, the 22% loss this strategy would have produced looks far better than the 82% loss I've eaten.

Drawbacks of dollar-cost averaging and when not to use it

On the other hand, dollar-cost averaging is generally a bad move for stocks or other investments that generally go up and up. For example, although there is no such thing as a guaranteed rising stock, if a stock gains 10% per year, every year, a dollar-cost averaging strategy would cause you to miss out on a good amount of gains.

In fact, one Vanguard study found that dollar-cost averaging actually underperforms lump-sum investing about two-thirds of the time. However, there are a few major pieces of information to notice. First, this study used portfolios based on stock index investing, not individual stocks. And, it also assumes that investors have all of their cash to invest at the same time, whereas in practice, most people invest incrementally over time. Finally, the study found that on average, the lump-sum portfolios outperformed by a total of just 2.3% on average over a 10-year period. When you consider that the S&P 500 rises by about 150% over the average decade, this isn't a big difference.

In a nutshell, if you have a large chunk of cash to invest now, and you're buying an investment whose short-term volatility doesn't worry you (like an index fund or low-volatility stock), dollar-cost averaging is probably not the best way to go. However, if you're investing in an individual stock and want to protect yourself from your own "First Solar" situation, dollar-cost averaging can allow you to buy the stocks you want, while still allowing you to sleep at night.

A great strategy for an expensive market

As a final thought, I especially recommend dollar-cost averaging when the market starts to look a little expensive (like it does now) or when there is a significant risk of a negative event (like the Federal Reserve raising interest rates). While the strategy is effective in any market, it makes even more sense if you think stocks are a bit pricey, but you don't want to stay on the sidelines.