Shares of F5 Networks (NASDAQ:FFIV) rose 10.9% in October, according to data from S&P Global Market Intelligence. The specialist in secure application delivery platforms got off to a bad start as share prices fell more than 5% in the first two weeks of October, but roared back to life with a confidence-boosting 11% jump based on F5's fourth-quarter earnings report.

F5's fourth-quarter sales increased 5% year over year to $525 million. Adjusted earnings jumped 15% higher, landing at $2.11 per diluted share. Analysts would have settled for earnings of $1.94 per share on sales of about $520 million.

The report was followed by a bevy of analyst upgrades and price target boosts, allowing share prices to follow up the immediate 11% boost with gains of another 6% before the month ran out. 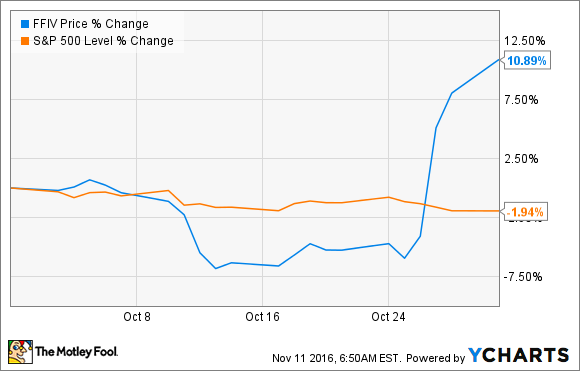 F5 is poised to play a big role in providing security for devices connected to the Internet of Things. The company's Silverline service undermines the popular distributed denial of service (or DDoS) attack strategy by placing a sophisticated, cloud-based filter around sensitive online services. Combined with hardware-based firewalls closer to the data center, even the mightiest DDoS of attacks can be stopped in its tracks.

To be clear, F5 Networks doesn't provide security tools to prevent IoT devices from being hacked and used to launch aggressive DDoS attacks -- that's the job of each device builder and their preferred software platforms. Other companies can, should, and will carve out large businesses in that space. But there will always be a place for increased security on the server and application levels as well, giving F5 a comfortable niche of its own.

F5 shares have gained a total of 44% so far in 2016, and looks just about correctly valued at today's prices.