Here are the five different types of loans the average bank makes, and who it lends to.

Puzzled about what a bank actually does? Most people are.

The truth is, banks are involved in just about everything. After all, every legitimate company, and most people, have a bank account and use banks' services in one way or another. The best way to explain the "average" bank is to look at the banking industry as a whole and see how banks allocate their capital and deposits to earn a return.

What the average bank actually does

Every week, the Federal Reserve adds up the balance sheets of every single commercial bank in the United States -- going so far to include U.S. branches of foreign banks -- and publishes the aggregate data. This gives us some insight into what the banking industry as a whole is doing at any given point in time. The chart below was created with a recent data release by the Federal Reserve. 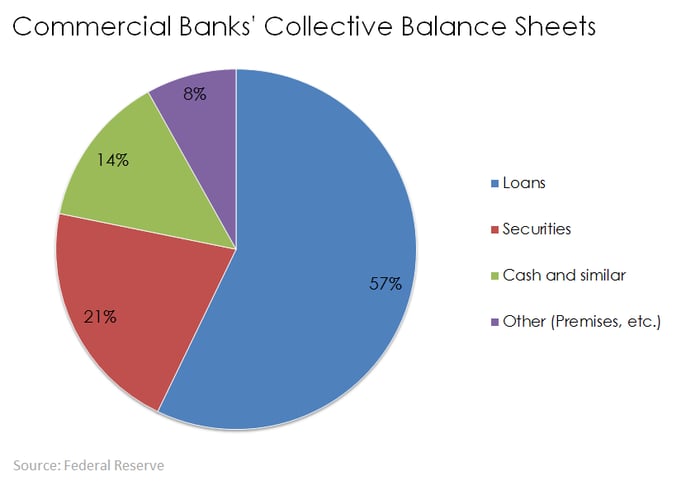 You probably aren't surprised by the chart above. Banks are lenders first and foremost, with about 57% of their assets tied up in loans to individuals and businesses across the United States. They also invest in securities, mostly government and government-backed bonds, and obviously keep some cash lying around to meet regulatory requirements and facilitate withdrawals.

In this article, I'll focus exclusively on loans, which make up a majority of the average bank's balance sheet and source of income. This is where banks differentiate from one another, building their loan portfolios in different ways with the goal of generating high amounts of income with the least amount of risk.

Admittedly, there are many different types of loans, each with their own opportunities and risks for the banking industry. And while most banks offer a full line of loan products, many tend to favor one type over another. In a small city, one bank might be the bank for personal mortgages, while another competes aggressively for car loans, and yet another prefers to underwrite commercial loans to businesses.

Taken together, though, we can see what the banking industry does as a whole, and thus create a model for who the "average bank" lends to.

Surprise! Residential mortgages make up most of the banking industry's assets. This category includes single-family homes, all the way up to properties with four units (fourplexes, for example). To a lesser extent, this segment also includes home equity loans, though banks have generally shied away from home equity loans after getting walloped by losses during the financial crisis.

Generally protected by large down payments and borrower behavior -- no one wants to turn their house over to the bank -- residential real estate losses are typically very low. Note that in every single year in the 17 years leading up to the financial crisis, banks charged off less than 0.5% of their residential real estate loans. Of course, losses skyrocketed during 2008, but they've been trending back down to historical levels ever since. 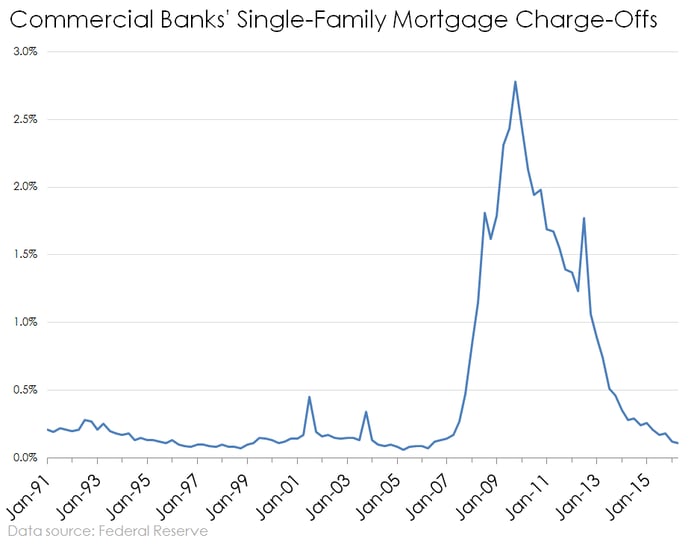 Up next are commercial and industrial loans, frequently referred to as C&I loans, which make up about 13% of assets across commercial banks. Under the broadest definition, this includes virtually every loan to a business that isn't secured by real estate. C&I loans are typically backed by specific collateral -- inventory or accounts receivables, for example. Larger and established businesses can get unsecured loans that are backed only by the company's ability to repay.

Because C&I loans are usually backed by specific collateral, and only issued to companies with established business histories, loan losses tend to be modest, even during very deep recessions. The chart below shows charge-offs since 1985. Note how losses rise and fall with the business cycle, peaking during recessions but staying relatively low during periods of economic growth. 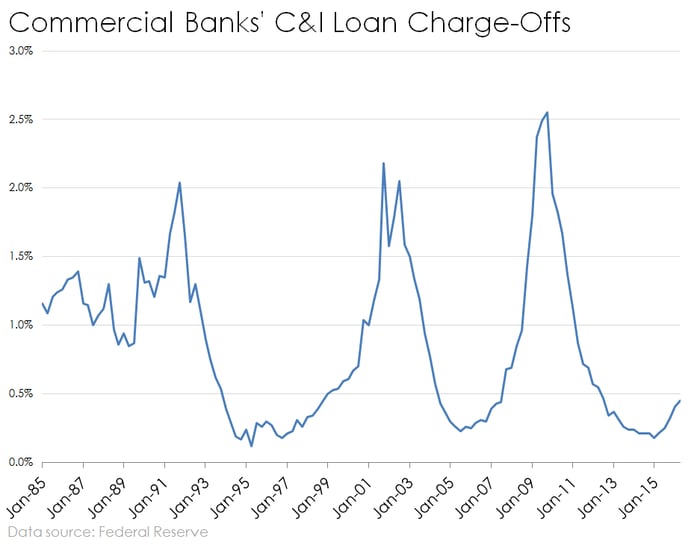 Commercial real estate (CRE) loans come in third at 12% of the banking industry's assets. This segment is self-explanatory. Loans backed by nonresidential property -- everything from car washes to factories and retail storefronts -- make up about 60% of all CRE loans. To a lesser extent, multifamily residential property (structures with more than four units), construction loans, and loans on farmland also appear here.

Commercial real estate loans can be very profitable for banks. Banks typically protect themselves by lending 60%-70% or less of a property's value. Thus, a bank might only lend a company $600,000 against a property worth $1 million, which provides a cushion that protects banks from losses should property values decline.

Over the last 25 years, CRE losses were virtually nonexistent outside two major events. The worst losses typically follow periods of too much construction and oversupply, which was the case in the early 90s and late 00s.

Within this category, construction loans are the culprit for the most devastating losses. Speculative by their nature, the collateral that backs a problem construction loan -- half-finished buildings or undeveloped land -- can be very difficult for banks to sell. It's an unfortunate reality that bank foreclosures on real estate are most frequent in periods where buyers are already few and far between. 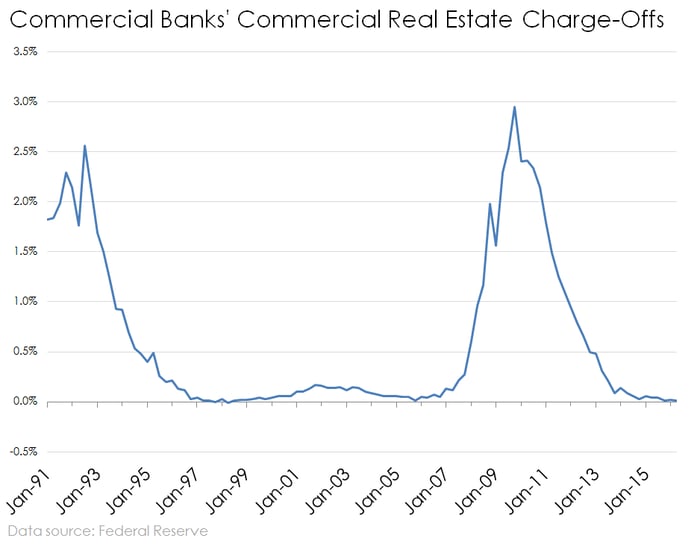 Other loans, mostly loans to financial companies -- 10% of assets

The "other loans" category includes some borrowing arrangements with nonbank lenders, loans to financial companies that are not lenders (insurers, for example), and other loans that are "simply not elsewhere classified." It's a true "other" category, to be sure.

Banks are often lenders to other lenders and investors. For example, many of the non-traditional lenders you see in shopping centers borrow money from banks to lend it to individuals and businesses. Similarly, private equity funds establish credit lines with banks to be able to deploy cash quickly, and then worry about establishing long-term financing for the investment at a later date. SVB Financial is one such bank that specializes in loans to financial clients, primarily private equity investors.

Loans to non-bank financial companies are generally the domain of the largest banks in the United States. Smaller banks tend to be more "plain-vanilla" and prefer traditional residential or commercial real estate loans.

So-called consumer loans make up about 9% of bank assets. Car and credit card loans make up the overwhelming majority of bank loans to consumers. Student loans and loans for medical expenses and other personal expenditures make up a much smaller share.

While most banks will happily issue personal loans or credit cards -- banks charge more than 9% on personal loans and just under 14% on credit card balances, on average -- few banks make personal lending a priority. All things considered, most banks would prefer to make one $5 million loan than make and monitor 1,000 loans to individuals of $5,000 each.

Loan losses tend to be relatively high, regardless of economic conditions. That means banks need to have fully staffed and dedicated collection and customer service departments at all times. For this reason, it's usually an all-or-nothing business -- lenders will specialize in personal lending, or engage in very little or no consumer lending at all.

Some specialists include Capital One Financial, American Express, and Discover Financial, which are all banks by definition, but they certainly aren't the prototypical bank given their focus on consumer lending. 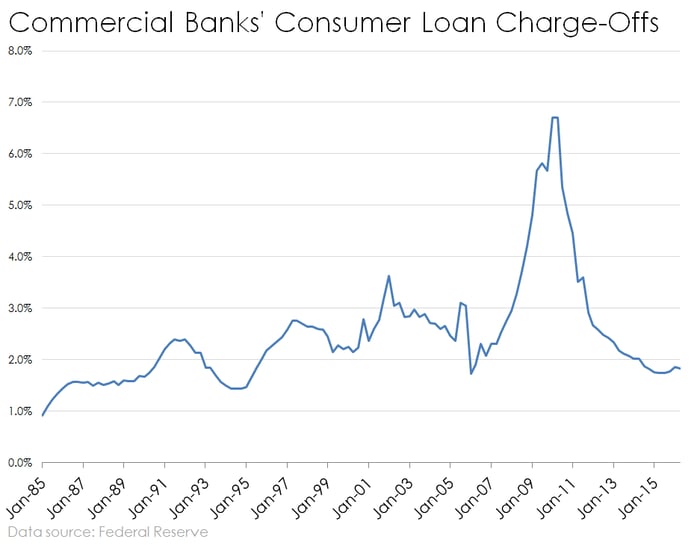 What banks really do

There are some important conclusions that we can draw from this simple study of the banking industry.

First, banks largely exist to serve the real estate industry. The vast majority of loans and securities that are on bank balance sheets are ultimately secured by real estate, from single-family homes to apartment buildings and farmland. To say that real estate and banking are related would be a massive understatement.

Secondly, though we think of banks as a risk business, banks are primarily in the business of avoiding as much risk as possible. Outside of personal loans and credit cards, banks want valuable collateral to minimize their risk of loss. And even with rock-solid collateral in place, banks will only make loans equal to a fraction of the collateral value.

The simple truth is that the very best banks will put a dollar at risk with the hope of making a penny after losses, operating expenses, and credit losses. There is very little room for error in the banking industry.

Finally, the banking industry is very competitive. There are more than 5,200 banks in the United States, in addition to credit unions and non-bank lenders. That means that for every type of loan discussed in this article, there are thousands of institutions that will underwrite it.

As a bank customer, use competition to your advantage and shop around. As a bank investor, realize that competition ensures that very few banks can and will generate outsized returns over long periods of time.