Most restaurants have faced slowing sales, at least in part because of changing consumer demand and too much competition. Sonic (NASDAQ:SONC) hasn't been immune to that, and its poor fourth quarter, along with ongoing fears that business won't improve any time soon, have dragged down its stock price.

Sonic reported on Oct. 24 that systemwide same-store sales decreased 2%. That broke down to a 1.8% same-store-sales decrease at franchise drive-ins and a decrease of 3% at company-owned drive-ins. On the positive side, net income per diluted share increased 6% to $0.53 in Q4, compared with $0.50 in the same period prior year.

News of the slowing sales caused Sonic's stock price to immediately drop. The restaurant chain opened October at $26.22 before closing at $22.91, a 12.6% drop, according to data from S&P Global Market Intelligence. 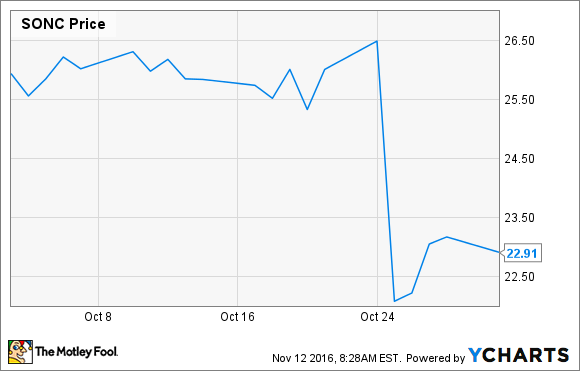 While the short-term news was bad, the full year was actually somewhat encouraging for the restaurant chain. It's also worth noting that by market close on Nov. 11, the stock had recovered most of its losses, closing at $25.93. Sonic CEO Cliff Hudson was optimistic in his remarks in the Q4 earnings release, noting that the full-year same-store-sales number was a positive.

"We delivered good overall performance in fiscal 2016, including 2.6% systemwide same-store-sales growth," said Cliff Hudson, Sonic Corp. CEO. "Slowing consumer trends that began in April, however, persisted through the fourth quarter, resulting in lower-than-expected sales and profits in the fourth fiscal quarter. At the same time, we are pleased to see approximately 1% net unit growth for fiscal 2016 with 31 net new units, sound progress toward our net unit growth goal of 2% to 3% by the end of the decade. By Nov. 11 Sonic had already regained much of its losses. Image source: YCharts.com.

The restaurant industry is facing some negative headwinds. Going forward, Sonic has to show that it can buck those trends and deliver increasing sales at a time when there may be fewer customers to go around. The chain also has to battle against a market that has increasingly used heavy discounts to bring people in, which hurts the bottom line.

Sonic had a bad quarter, but a decent year. Its share price crashed a bit because the numbers were worse than expected, but it recovered because the overall trend has been decent. If the company can post even small gains in Q1, it should see growth in its share price and be well positioned for the next fiscal year.