Iconix Brand Group (NASDAQ:ICON) -- which owns 32 brands across fashion, sports, entertainment and home, such as Waverly and Umbro -- reported earnings for its third quarter on Nov. 8 and created quite the stir among investors. The company's last quarter was mixed, but management had enough good things to say to assuage concerns by the end of the day.

The stock was down double digits upon the release of the report, only to fully recover by the end of the day. Investor angst was fanned by management's guiding revenue and profits toward the low end of full-year guidance. Revenue is estimated to be $3 million to $5 million lower than the previous estimate of $370 million to $390 million for the whole year. Earnings per share were lowered $0.04 from the previous outlook of $0.93 to $1.08. 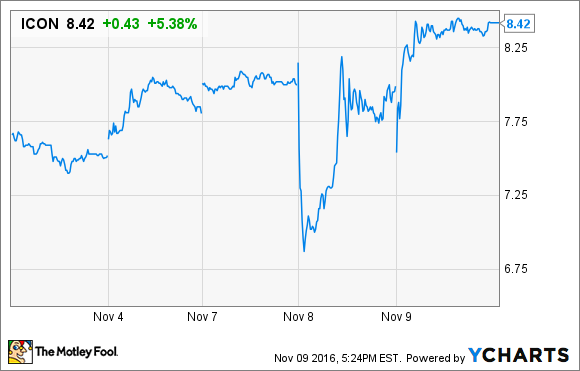 Management said revenue is coming in lower because of delays from new initiatives put in place in its men's clothing and fashion segment. Earnings were affected by higher than anticipated legal costs associated with addressing the Securities and Exchange Commission's inquiry letter regarding past accounting practices from 2013 to 2015.

The good news in the report

Despite the lower guidance, investors ultimately opted to look at the bright side. Iconix reported that the aforementioned SEC inquiry has now been completed. The company cleaned up its management last year and now has a new CEO in John Haugh. With the SEC inquiry now complete, that clears one dark cloud out of the sky for the new team at the helm.

Investors have also been awaiting a detailed business strategy and road to full recovery since Haugh took over back in March. A final piece of good news is that the wait will soon be over. Nov. 15 will be Iconix Brands' investor day, carrying with it the promise of a new business vision and growth strategy for the next three years.

Also good news was the company's rebounding cash flow situation. Revenue has been flat in the last year, but expenses piled up during Iconix's restructuring. Now that the ship has been righted, the company has been reeling in costs once more and has returned to profitability. Cash flow -- or cash left over after basic business operations are paid for -- appears to have bottomed out as well and is expected to come in between $169 million and $184 million for the year.

The not-so-good news from the report

Iconix's diversified portfolio of brands turned in another mixed quarter. The men's and women's clothing and fashion segments had a weak showing yet again, with a 14% and 13% year-over-year decline in revenue. This loss was offset by strength in the home and entertainment segments.

Entertainment led the way with a 22% year-over-year gain in revenue. The Peanuts cartoons have been a good investment for Iconix. A year after the release of The Peanuts Movie, a new animated series and strong interest in the franchise in Japan has helped the upward momentum. MetLife did decide to part ways with Snoopy during the quarter, but the insurance company promised to honor the current licensing agreement through 2021.

The home segment notched a 16% year-over-year gain on the back of the Sharper Image brand. The good performance from home was attributed primarily to holiday shopping getting under way.

The clothing and fashion brands notched a bigger year-over-year loss because of the sale of the Badgley Mischka brand earlier in the year. However, other weakness showed up, especially in the Rocawear and ECKO men's brands, as the company continues to revamp the look. Iconix sees this year as one of transition for clothing and expects the segments to return to growth in 2017.

What investors should consider next

The long and the short of Iconix's last quarter is that, while a recovery from 2015's snafu is under way, investors will need to be patient. Progress is being made, though, and next week's investor day will shed some light on what shareholders can look for in quarterly results going forward.