I'm sure investors in oil refiner HollyFrontier Corporation (NYSE:HFC), uranium miner Cameco Corporation (NYSE:CCJ), and tax preparation specialist H&R Block, Inc. (NYSE:HRB) probably want a mulligan for the entire year of 2016. All three of these dividend-paying stocks have seen share prices plummet more than 25% year to date. The one silver lining in these large drops is that the dividend yields for all of these stocks have increased to rather enticing levels.

Are the depressed prices of HollyFrontier, Cameco, or H&R Block signaling that it's time to think about buying shares and getting a hold of those enticing yields? Or are these companies just a few moments away from a dividend cut? Let's take a look at the prospects for each company to see if now may be the time to buy these stocks.

The big move that could change things very fast

The market for oil refining has been a tough one this year. Rising crude oil prices throughout the year have narrowed the price spread between crude and the refined products refiners produce. This has led to sharp decline in profits for HollyFrontier and many of its peers. If that was the only issue, this year might not have be so bad -- after all, 2015 was a great year to be a refiner. The difference is that the entire industry is also dealing with unusually high costs related to complying with the U.S. EPAs Renewable Fuel Standards, which have the potential to cost more than $400 million this year.

All of this has weighed heavily on the stock, but the recent announcement that it was buying the Petro-Canada lubricants business from Suncor Energy for $845 million is a transformative deal that could help make up for a lot of weakness in the refining market.

The recently announced deal will add about 15,600 barrel per day of high-margin lubricants to the HollyFrontier refining portfolio. More importantly, though, is that the acquisition will add between $100 million to $200 million in EBITDA annually -- about a 14%-27% boost in EBITDA for the entire company's portfolio over the past 12 months. 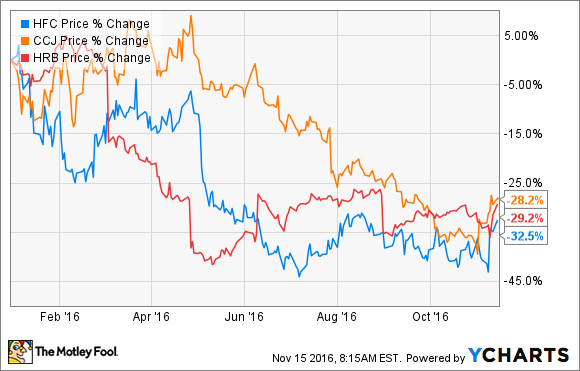 With the demand for higher-performance lubricants at a premium -- better lubricants help improve fuel efficiency -- and less regulatory requirements on the business, this acquisition could be an absolute game-changer for HollyFrontier. With shares trading at an enterprise value to EBITDA of 8.6 times today, before this business is integrated, it looks like shares of HollyFrontier are a bargain.

Nuclear power has been through some sever ups and downs in recent years. The Fukushima Daiichi plant meltdown in 2011 sent shockwaves through the entire nuclear industry as Japan completely shut down all of its reactors for evaluation, and Germany also announced the winding down of its nuclear power plants. On top of that, there are the regularly scheduled shutdowns of older facilities.

All of these factors have led to a sharp decline in demand for uranium ore. That, coupled with oversupply, has led to severely depressed uranium prices that have led to a long, gradual decline in earnings dating all the way back to 2009.

Today, though, there are some small signs that uranium prices will start to pick back up. Inventory levels of stored uranium ore are winding down, and major nuclear plant construction in China and India suggests demand will start to tick back up again. Management expects the addition of these facilities, and Japan slowly bringing its nuclear fleet back online, to significantly increase demand and, with it, prices for uranium ore.

There are, of course, some intangibles that are hard to quantify, such as China's desire to mine more uranium domestically so it won't be as reliant on imports. Like so many other commodities out there, China's decision to get into the production of base metals and commodities hasn't always led to fantastic returns. If Cameco is able to maintain its 30% market share of global uranium production, this may not be much of an issue, and today's stock price -- and the 3.4% dividend yield that comes with it -- may be a decent time to buy. That being said, there are still some unanswered questions about the future of nuclear power and uranium demand that could really throw the investment thesis for Cameco for a loop.

A tighter race to do one's taxes

When it comes to H&R Block, pretty much all that matters are the three months leading up to tax day on April 15th. This past year, the company's revenue and earnings suffered a bit as total tax preparation numbers were down 6.1%. The biggest reason for this change was more and more people choosing to do their taxes by themselves, as evidenced by software company Intuit (NASDAQ:INTU) announcing that its Turbo Tax software saw year-over-year unit growth of 15%.

The one solace for investors is that net income declines weren't as noticeable on the bottom line. Even though net income for last fiscal year was down 21% year over year, earnings per share were only down 12% thanks to a massive share repurchase program that lowered the total stock count by 20%. For the coming year's results, it also helps that it will no longer have its Block Bank business dragging down returns because of the capital requirements for banks.

Today, shares of H&R Block carry a dividend yield of 3.6% and a enterprise value to EBITDA ratio of 8.0 times. It's hard to predict what will happen come tax time, and whether the company will be able to preserve its market share from more and more intrusion from competitors such as Intuit. If it can claw back some of those losses, though, then the company's stock could be a pretty attractive investment.