Williams Companies (NYSE:WMB) recently reported pretty solid third-quarter results, thanks to its MLP Williams Partners (NYSE: WPZ). Overall, its adjusted EBITDA was up 8% to $1.2 billion, fueled by a similar increase at its MLP because of growth across all of its operating segments. Both companies expect that growth to continue in 2017, according to comments by CEO Alan Armstrong on their third-quarter conference call. Here's what's driving that view.

A trio of clear drivers

On the call, Armstrong went through Williams' 2017 growth drivers, which the company outlined on the following slide: 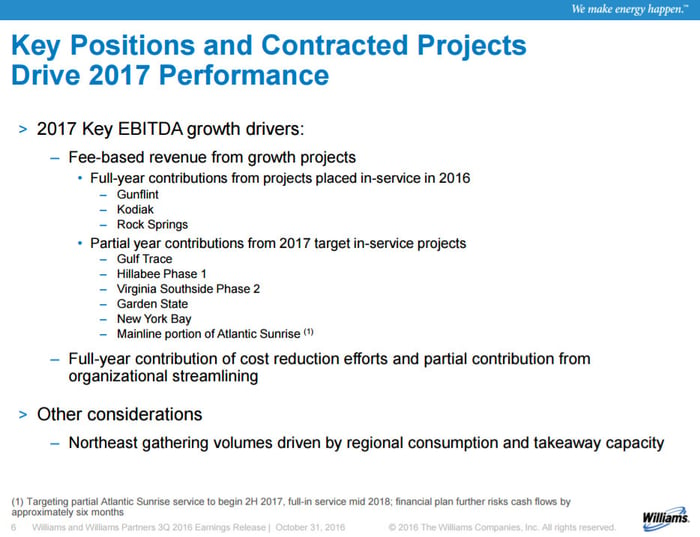 You can see here the key growth drivers for 2017. Of course, the obvious stuff is the full-year impact of a lot of these projects that came on mid-year, and then a lot of new projects that will be coming on in 2017 that you can see listed here. And then, of course, the full year of cost reduction efforts will show up in 2017, as well as likely some additional contributions from the streamlining that I mentioned earlier.

As Armstrong points out, the company has three fairly obvious growth drivers next year. First, it will continue to benefit from the three projects it recently brought online, which will drive growth in the first half of 2017 versus comparable quarters in 2016. In addition to that, Williams Partners has six projects currently under construction that are expected to come online next year and provide incremental earnings and cash flow.

Finally, Williams Partners has been driving costs out of its business. So far this year, its expenses are down $76 million compared to last year -- despite the fact that it has added additional assets and continued to grow the business. The company expects that number to be even larger next year as it benefits from a full year of the cost-saving initiatives and continues to push costs out of its business, including via its decision to slim down its operating structure.

In addition to these known commodities, there are a couple of other potential growth drivers that could lift earnings even further next year. Armstrong detailed these by saying that

Another consideration, of course, is just the impact that a normal winter would have on the northeast local market demand for the regional consumption there in the northeast. And so, if you think about that, there's two ways for gas to move out of those gathering systems in the northeast. One is the takeaway capacity, and we're certainly anxious to see the latest REX expansion come on here toward the end of this year. But in addition to that, we also have the regional consumption, and with the very mild winter we had last year, we are hoping to see some incremental demand that would drive gathering volumes in the northeast as well.

A more typical winter would fuel higher demand for natural gas as a home heating source than last year did. That would enable natural gas producers to start returning some of their shut-in wells to production, which is an issue that has hampered volumes and earnings at Williams' northeast G&P segment in the past. As such, a return to normalcy would benefit Williams because more gas would flow through its gathering pipelines and processing assets, which would boost its income.

Aside from warmer weather dampening demand, another major problem causing production shut-ins has been the lack of takeaway capacity to move gas outside of the northeast. However, this winter the region will benefit from the fact that Tallgrass Energy Partners (NYSE: TEP) is expanding the Rockies Express Pipeline (REX). Tallgrass Energy Partners expects the capacity enhancement project will be complete during the fourth quarter, and it has already sold out 100% of that capacity. The REX expansion is a much-needed project, given that Tallgrass Energy Partners continues to experience "strong demand for takeaway capacity in the Marcellus/Utica." This project benefits Willaims because it should pull gas out of the region, which will bolster demand and therefore the gas that flows through its system.

Overall, 2016 has been a solid year operationally at Williams, thanks in part to recent growth projects and cost-saving initiatives at Williams Partners. Those same drivers should continue working in its favor next year. Meanwhile, a cold winter could provide an additional boost to results because it would drive higher volumes through Williams' assets in the northeast. These catalysts should produce pretty healthy growth for Williams in 2017.