In a lot of ways, it's the same as open surgery. Except for this one crucial variable.

Make no mistake about it: Hernia operations are a big deal for shareholders of Intuitive Surgical (ISRG 1.51%) and for the patients who use the company's products. The company's da Vinci robotic surgical system has been around for well over a decade, but the newest iteration -- the da Vinci Xi (pictured above) -- has become increasingly popular for the procedure.

While management doesn't break out operation figures with granularity, they have repeatedly stated that growth in hernia operations was the biggest driver in growth of "U.S. general surgery" operations. And as you can see below, this subcategory has been the primary reason that operations are up as much as they are over the past five years.

The growth in this category (represented by the blue bars) is significant, up 833% since 2011. But it's worth asking why it has become so popular.

In August of this year, Surgical Endoscopy published a paper describing what it found when it compared patient outcomes for both ventral and incisional hernia repairs over a four-year period. The takeaways were:

Anthony Gonzalez, chief of surgery for Baptist Hospital in Miami said, "the robotic-assisted approach has many potential benefits for hernia surgeons and patients alike."

Of course, any statistics student will tell you that these numbers alone are pretty meaningless -- they aren't compared to a control group who underwent traditional open surgery.

For that, we turn to a study completed more recently by Dr. Michael Rosen of the Cleveland Clinic. In his study, he found that the rates for wounds, reoperations, and readmissions were the same between open surgery and robotic-assisted surgery. On the face of it, that may make it seem like bad news for patients and Intuitive shareholders.

However, he also found that the average hospital stay was 2.5 days shorter for those who underwent robotic surgeries. That is a win-win-win for almost everyone involved: Patients go home to recover sooner, hospitals are able to keep beds open for others, and insurance companies have lower costs. 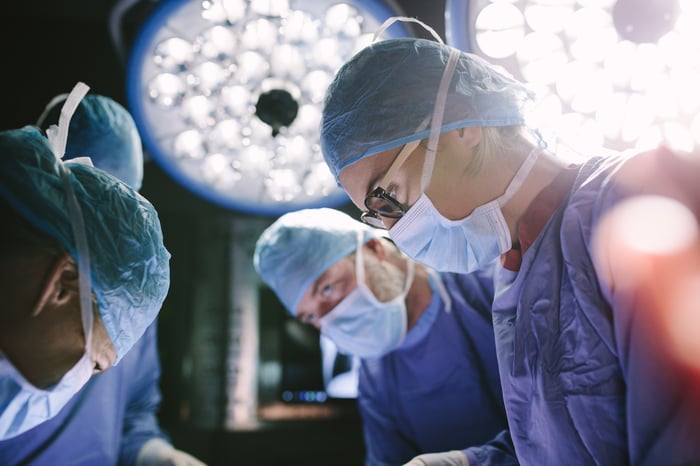 The big picture for Intuitive shareholders

As a shareholder of Intuitive myself, I've long argued that we should stay abreast of the most recent medical findings but be mindful not to get too caught up in the details. The bottom line is that Intuitive has a huge installed base of both machines and doctors who are trained in using them.

Over the years (and decades), doctors will tinker with the da Vinci's use. In some cases, using the machine will make sense for all involved -- most importantly, the patients. In some cases, however, it won't.

The process of tinkering -- trial-and-error experimentation -- is how real progress is made in any endeavor. By owning a small part of this company, shareholders are exposed, in a healthy way, to the benefits that Intuitive offers society at large. It appears that the hernia operation is one such example, but that verdict can change at any moment.

Staying steady and holding course is probably the most important thing to remember over the long run.