With premiums rising for some, deductibles going up in many cases, and drug coverage becoming spottier, you might  think that Americans would be greatly dissatisfied with the various health insurance companies. Add in the fact that healthcare has been a hot-button political issue and you would have even more reason to expect overall satisfaction with the industry to be down.

In reality, however, the opposite is true. It seems that health insurance companies are not being held responsible by people for the politically divisive issue that healthcare has become. In fact, the latest American Customer Satisfaction Index (ACSI) report [registration required to see full report] covering the insurance sector shows that people are actually happier than they were during the previous two years (but not quite satisfied enough to hit all-time highs).

What did the ACSI survey say?

The overall industry was helped by big gains from Aetna (NYSE:AET) and Anthem (NYSE:ANTM) These two companies now sit in a tie for first place at 75. Both of those companies were among the top-percentage gainers in the report with Aetna improving by 10% over last year and Anthem coming close behind with a 9% improvement. Only Cigna, which came in last with a 67, gained more as it improved 12% from a score of 60 in 2015. 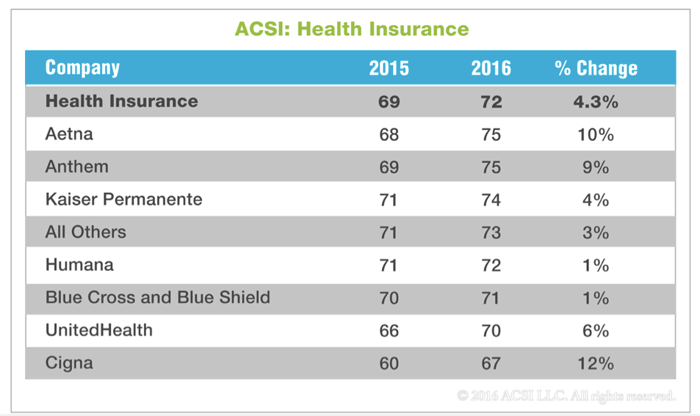 Why is satisfaction up with health insurance companies?

"ACSI data show that customers gave higher marks for a number of common experiences that contributed to increasing customer satisfaction for health insurers," ACSI Managing Director David VanAmburg told The Motley Fool via email. "The improvements include access to both primary care and specialty doctors, ease of submitting claims, and call center satisfaction."

All the categories that make up the overall ACSI score for healthcare have improved or at least stayed the same. Consumers rated access to primary care an 80 (up from 78 last year) and access to specialty care and hospitals a 78 (up from 77 in 2015). Ease of submitting a claim also climbed to 77 from 75 and coverage of standard medical services moved up from 74 to 76. Even satisfaction with call centers rose, jumping to 73 from 70.

In fact while a few categories, including website satisfaction, timeliness of claim processing, prescription drug coverage, ease of understanding insurance statements, and range of plans available, were flat, it's worth noting that none dropped. These numbers, according to VanAmburg, show that health insurance companies are moving in the right direction.

"Satisfaction isn't all about price," he wrote. "There are a number of other factors that could offset higher prices, like better quality care and better access to doctors."

Good news, but only a piece of the puzzle

Health insurance companies are improving their customer satisfaction rating, but the category is still one of the lowest-scoring ones tracked by ACSI. For example, health insurance outscores internet service providers (64) and cable television (65), but it's well below e-business (74.9), banks (80), and even property insurance (78).

Still, at a time when so much controversy exists over health insurance in general, it's impressive that the industry has continued to improve its customer service. Much more work remains to be done, but this is encouraging, and a sign that despite the political problems facing health insurers, the companies can continue to better serve their customers.