For the fourth trading day in a row, the KBW Nasdaq Bank Index of large-cap bank stocks is flying higher. The index has gained more than 13% since Trump was declared the winner, compared to a mere 1% change in the S&P 500 over the same time.

Some banks are rising faster than others. Notable gainers include Bank of America (NYSE:BAC) and SVB Financial (NASDAQ:SIVB) which have gained 17% and 20%, respectively, all in less than one full week after election results were declared

If you're thinking that Trump is a puzzling inspiration for a bank stock boom, you're not alone. Here's why bank stocks are flying on the back of his presidential win.

The market is still trying to digest what exactly a Trump presidency would entail, but the consensus view is that Trump's United States will spend more while taking in less in tax revenue.

On the campaign trail and after his election, Trump has repeatedly signaled his interest in fiscal stimulus, suggesting that he would seek to spend more than $550 billion on infrastructure projects all around the United States. At the same time, Trump also supports lowering the corporate tax rate to 15% from 35%, and allowing American companies to pay a reduced rate of 10% on untaxed earnings currently stored overseas.

In short, Trump's policies call for more government spending and less tax revenue, inevitably leading to larger budget deficits and more government borrowing. And while few may have taken Trump seriously just hours before he was named the winner, the market is taking him very seriously now. Trump will take office with Republican majorities in the House and Senate, giving him a better chance to turn campaign promises into legislative reality.

Over long periods of time, the banking industry as a whole can only grow at a rate roughly equal to GDP growth. Higher inflation should theoretically allow for higher nominal GDP growth, and greater loan demand.

2. Rates to the rescue

In simple terms, banks make money borrowing short and lending long. What this means is that they generally pay interest to their depositors based on short-term rates, and charge their borrowers interest that is based on long-term rates. 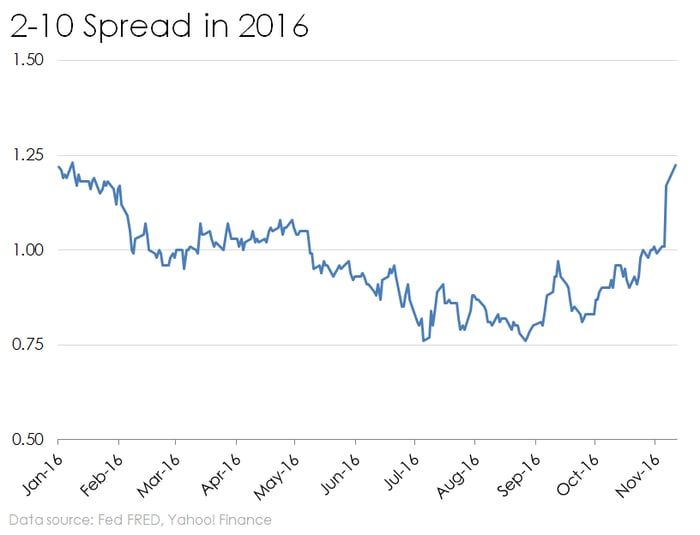 You'd have to be blind to miss the "Trump bump" on the year-to-date chart of the 2-10 spread above. Since Trump's election, long-term rates have risen much faster than short-term rates to reflect changing expectations surrounding inflation and the government's demand for borrowed money. At 1.23% on Monday, the 2-10 spread reached a new high for 2016, and marked a 60% increase since the low achieved in September.

Of course, not all banks are created equal. The largest Trump bumps are showing up in banks like Bank of America and SVB Financial, which are largely agnostic to whether short- or long-term rates rise. Both banks would be perfectly happy to see rates increase on the short end, long end, or both.

Rate increases are easily the largest banks' biggest earnings drivers. In a recent presentation, Bank of America noted that it would earn more than $5.3 billion in incremental net interest income if short- and long-term rates increased by one percentage point over the next 12 months. Importantly, it distinguished between increased income from short-term rates, noting that 60% of the increase in net interest income would come from an increase in short-term rates.

Likewise, SVB Financial is in good position to benefit from a rise on the short end of the curve. The bank's cash-rich clientele entrust it with more than $30 billion of deposits on which the bank pays nothing in interest. It uses these deposits to invest in low-yielding, short-term securities. If short-term rates were to rise, yields on its securities portfolio would rise, too. Given that it doesn't pay interest on most of its deposits, the increased income will flow to its shareholders.

Short-term rates could soon be on the rise. Traders are optimistic that the Federal Reserve will decide to raise interest rates in December, with markets pricing in a 92% chance of a 0.25 percentage point increase or larger.

3. A rollback of regulatory regimes

It's become a running joke among bank investors that post-crisis banks are compliance companies that just happen to make loans on the side. Increased regulatory scrutiny and compliance costs are affecting banks of all sizes, and have been a frequent subject on earnings conference calls for years since the financial crisis.

Trump has prominently proposed eliminating many of the provisions in 2,300 pages of the Dodd-Frank Reform Act, which passed in 2010 and regulated everything from banks' trading activities to just how much banks could earn from swipe fees on customer debit cards.

To be sure, rolling back regulation has its pros and cons. Many of the rules put in place were established for a reason, and were at least intended to avoid another great financial crisis inspired by excessive risk-taking throughout the banking industry. Where higher rates provide a clear and obvious benefit to bank profitability -- rate-sensitivity tables are published plainly in banks' financial reports -- it's impossible to know which regulations will be trimmed back, if at all. But one thing is certain: Reduced regulation could help banks scrape more savings from already gutted expenses.

The Trump Bump: Why Banks Are Up After the Election @themotleyfool #stocks $BAC $SIVB $^GSPC Next Article
Current