If Apple moves forward, it will need to learn from Google Glass's failure. Image source: Google.

Apple (NASDAQ:AAPL) hasn't even proven that the average consumer needs or wants a smartwatch yet, but the company may already be looking into expanding its wearables strategy into the realm of smart glasses.

Bloomberg reported yesterday that Apple is thinking about making digital glasses its next foray into wearables. The glasses would display contextual information to users to create an augmented reality (AR) experience, which is in line with CEO Tim Cook's suggestion that AR has a lot more potential than virtual reality (VR) to broadly and profoundly affect consumers. The company has supposedly already had preliminary discussions with suppliers and taken delivery of small volumes of "near-eye displays" for prototyping purposes. The earliest that such a device would reach the market would be 2018.

Of course, the project could be shuttered, and it remains in an experimental phase as Apple explores the idea.

The challenge is that Apple Watch is already stalling, just a year and a half after its initial launch. Since Apple stubbornly refuses to disclose any financial data regarding the performance of its first wearable device, investors must turn to sometimes unreliable third-party estimates. According to market researcher IDC, Apple Watch unit shipments have been utterly decimated this year. 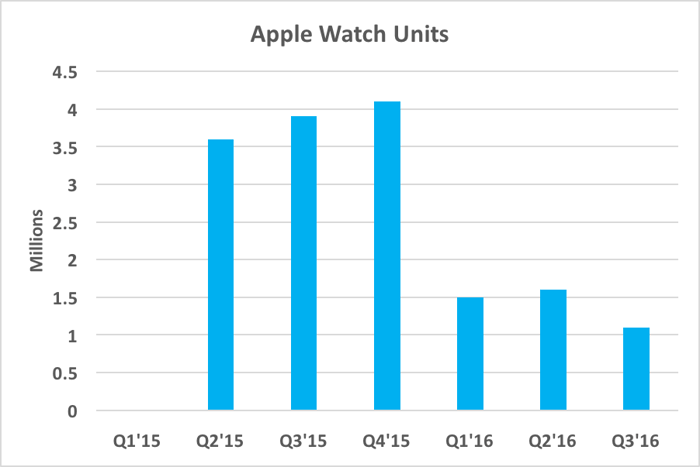 Apple Watch Series 2 was launched at the very end of September in limited supply, so this chart predominantly represents the original Series 1. That also means that there are unlikely to be many upgrades in here, and these sales should be going almost entirely to first-time adopters.

The broader smartwatch category saw its first decline in the second quarter, with worldwide units falling 32%. Apple Watch is the No. 1 smartwatch in the world right now, so the company's performance has a disproportionate effect on what the entire market is doing. Depending on how you define a smartwatch, this market is either a year old or a few years old, but seeing it start to contract already is not a good sign.

Simply put, Apple hasn't proven that mainstream consumers need a smartwatch, or even that they should really want it that badly. The company is still searching for that killer use case. While bolstering its fitness uses makes sense, those are still only features that a small subset of customers is asking for (I haven't been swimming in months).

There's by no means a requirement that Apple Watch must succeed before Apple jumps into the next category, but growing adoption of Apple's first wearable would pave the way for its next one.

Picking up where Google left off

Naturally, a discussion of Alphabet's (NASDAQ:GOOG) (NASDAQ:GOOGL) failed Google Glass project is obligatory at this point. The concept that Google came up with was somewhat compelling.

Beyond the concept, there was a tremendous gap between vision and execution. Apple will need to address Glass's failings if it has any hope of potential Apple Glasses succeeding. Google Glass failed for a number of reasons:

Some of these reasons can be attributed to immature technology, particularly around battery performance and component costs.

Conceptually, AR does have more potential to impact an average person's life if they're willing to adopt it and the product is done right as the platform grows. It's not clear if that will happen within just two years, though. Having greater access to information is a good thing (and I don't mean getting notifications on your wrist).