Way back in 2012, Suburban Propane inked a deal to buy the propane assets of Inergy LP. Inergy was moving out of propane and into the midstream space. The deal was massive for Suburban, basically doubling its customer count to 1.2 million and more than doubling the amount of propane it delivered. It also came with a pretty big price tag of $1.8 billion, $1 billion of which was funded via a debt offering.

That left a huge overhang on the company's balance sheet. Between fiscal 2011 and fiscal 2012, debt went from roughly $350 million to $1.4 billion. The company has been working on paying that down, and debt now stands at around $1.2 billion. That may not sound like huge progress, but juxtapose that against the fact that the partnership offers investors a 10% or so distribution yield, equal to about $160 million through the first three quarters of the company's most recent fiscal year. Interest expense over that same nine-month span was around $56 million. This is an income play, and that's where the partnership is putting most of its money.

That said, the integration is largely complete. And it has gone pretty smoothly, especially if you compare it with the upheaval that competitor Ferrellgas Partners (OTC:FGP) is facing after expanding into the midstream space -- it recently announced write-offs, a CEO change, and the potential for a distribution cut. In fact, Inergy, which is now a part of Crestwood Equity Partners (NYSE:CEQP) after subsequent mergers, has also struggled since quitting the propane space -- Crestwood Equity Partners cut its distribution in half in April.

Suburban, meanwhile, which basically stuck to its propane knitting, has increased its distribution in nine of the past 10 years. That brings up the future, now that Suburban is done integrating its huge acquisition and is again focusing on bolt-on purchases. 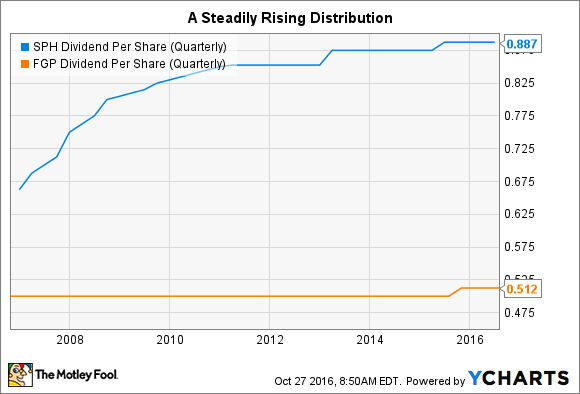 The most recent example is Suburban's late 2015 agreement to purchase a Florida propane company for $45 million. The acquisition added around 7,600 customers -- a tiny number compared with the Inergy deal, but far easier to digest and a lot less complex. Here's the thing, though: Suburban paid for it with cash on hand. Small deals are easier to finance, too.

Now fast-forward to the company's fiscal fourth-quarter earnings release, which contained this line from CEO Michael Stivala: "Once again, we funded all working capital needs, including the Propane USA acquisition, from cash on hand without the need to borrow under our revolving credit facility." The partnership's business is, basically, self-sufficient.

That may not sound like a big deal, but warm weather has put a notable dent in demand for propane, which is used largely for heating. So the last couple of years have been hard ones for the propane industry, which helps explain why Ferrellgas thought it would be such a good idea to expand into the midstream business (as noted, that didn't work out too well).

While Suburban didn't branch out into a new business like Ferrellgas, the risk for Suburban and its unitholders is that the partnership ended fiscal 2015 with $152 million of cash but had only $37 million left at the end of fiscal 2016. If demand for propane doesn't pick up this winter, Suburban will either have to take on debt or it might decide to trim the distribution. So after three warm winters it's worth watching the weather if you own Suburban. If history is any guide, however, it will try to avoid a cut--Suburban hasn't increased its distribution every year, but it has never reduced it, either.

You'll want to dig in

So the big theme here is that Suburban Propane Partners has successfully absorbed a huge acquisition, is again starting to play the role of consolidator with smaller deals, and is holding its own in a difficult market. Or, put a different way, Suburban is sticking to its propane knitting and doing just about everything right, rewarding unitholders along the way with an over 10% distribution yield. If you're looking for income, boring Suburban should be on your watch list, just keep an eye on the weather since another warm winter would be a strain on the company's finances.