It's been just over a week since Donald Trump won the general election, and investors are still trying to figure out what a Trump administration holds in store for their positions. That's much easier said than done, considering the fact that the president-elect hasn't been particularly forthright with detailed plans on any of his proposed policies.

One issue that Trump campaigned on was his support of alleviating taxes on repatriating cash, arguing that allowing corporations to bring funds home at favorable tax rates would translate into domestic investment that would in turn spur economic activity stateside. Of course, that was the argument for the last repatriation holiday in 2004, and most of the cash that companies brought back was promptly returned to shareholders through dividends and share repurchases. There are valid arguments for and against a repatriation holiday, but most lawmakers are against repatriation holidays because the government ends up losing tax revenue over the long-term; the holidays simply encourage more profit shifting as companies just wait around hoping for the next repatriation holiday.

Trump's site from his campaign calls for relief: "It will provide a deemed repatriation of corporate profits held offshore at a one-time tax rate of 10 percent." This is a slightly higher rate than the 2004 holiday, which allowed companies to repatriate cash at 5.25%. It's worth noting that Trump's site after becoming president-elect does not include details on repatriation, so it's not clear where Trump currently stands on this issue.

You may have noticed that I didn't refer to Trump's proposal as a "holiday." It's a minor semantic distinction, but it's important. There are three broad ways that lawmakers have proposed dealing with foreign cash hoards, which now total approximately $2.6 trillion. There is a transition tax, a stand-alone deemed repatriation, or a repatriation tax holiday. Deemed repatriation is sort of a hybrid of the other two, so you could arguably apply "holiday" to deemed repatriation due to its one-time nature as well. The Center on Budget and Policy Priorities, a nonpartisan research and policy institute, provides this handy table: 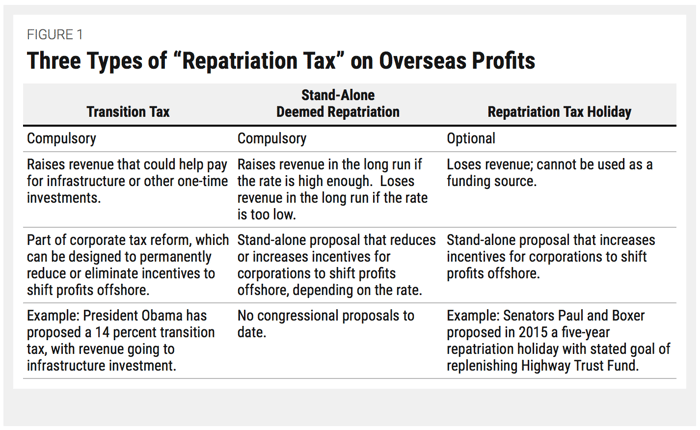 The way that deemed repatriation would work is that the government would impose a one-time tax on all foreign profits that are currently being held overseas. The most important distinction is that unlike a pure holiday, which allows for optional repatriation, deemed repatriation is compulsory and the tax would be imposed regardless of whether or not companies actually brought that cash back. The U.S. government would be able to use the incoming revenue for things like infrastructure, but it doesn't guarantee that companies will actually repatriate cash. But if they're paying the tax anyway, many companies will probably choose to repatriate.

How this could save Apple billions

Much digital ink has been spilled regarding Apple's (AAPL -0.45%) massive and growing foreign reserves, which now stand at $216 billion. The Mac maker has long tapped the debt markets as a roundabout way to raise domestic cash while avoiding repatriation taxes, funds that it uses to pay dividends and repurchase stock. But that strategy has inherent limits, as Apple has now amassed nearly $80 billion in long-term debt.

At the same time, CEO Tim Cook has already stated that Apple is planning on repatriating a large chunk of cash as early as next year, noting that the company has "provisioned several billion dollars" for taxes without elaborating further. It seems that some level of repatriation is already on the table for Apple. Using Trump's proposed 10% deemed repatriation rate, Apple could be facing a one-time tax bill of $21.6 billion. That doesn't sound like savings, and whether or not Apple actually saved money depends on how much it was already planning on bringing home.

Here are just some theoretical scenarios.

I've skewed toward higher amounts here on purpose. Under normal circumstances, it's very unlikely that Apple would have been considering repatriating $50 billion or more, and I highly doubt that the amount Cook was thinking of approached $50 billion. But if Trump enacts his deemed repatriation rate of 10%, Apple has an incentive to repatriate more while it still can, as its savings increase in lockstep. It's also unrealistic to think that Apple would repatriate as much as $200 billion, since it still needs foreign reserves to continue expanding its international retail presence as well as capital spending for product tooling and manufacturing infrastructure that resides within partner facilities in Asia. The more that Apple repatriates under this hypothetical scenario, the longer it can fund its capital return program without turning to capital markets.

None of this is to suggest that a Trump Administration would be pro-Apple by any means. The president-elect has already demonized Apple's globalization as part of his nationalist-oriented campaign, and a trade war would definitely hurt if Trump goes through with it. But if Trump and a Republican Congress move forward with a deemed repatriation bill, Apple could actually benefit.