For Pfizer (NYSE:PFE) shareholders who have come to count on steady dividends, there's one frightening thing that jumps out at anyone who looks: the dividend payout ratio of well over 100%. Pfizer's dividend payments are considerably higher than its earnings. Should shareholders be scared?

When was the last time Pfizer's dividend payout ratio was this high? Back in 2008. 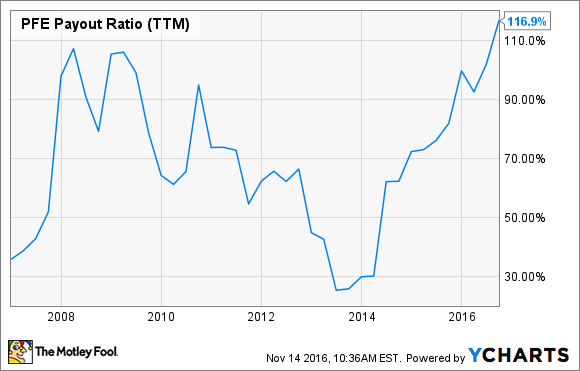 What happened around that same time? If you guessed that Pfizer slashed its dividend, give yourself a pat on the back. That's exactly what happened. 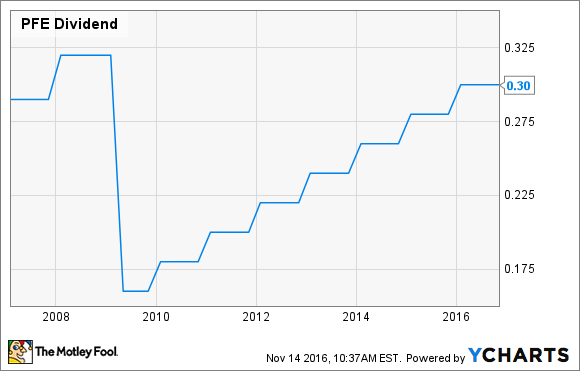 Does this mean history will repeat itself? Not necessarily. Pfizer's huge dividend cut back then was caused by the global financial crisis. Pfizer certainly wasn't the only company to cut its dividend during that period of uncertainty.

The problem(s) with dividend payout ratios

Still, though, no company can keep paying out more in dividends than it makes in profits indefinitely -- and that's the situation Pfizer finds itself in right now. But before shareholders become too alarmed, note that there are a couple of problems with payout ratios.

First, the denominator in the dividend payout ratio is net income (i.e., earnings) -- and net income doesn't always tell the full story. Pfizer's net income in 2016, for example, has been weighed down by several non-recurring charges.

Pfizer wrote off $331 million in the first half of the year for a generic injectable antibiotic product and another $265 million related to an anemia drug. That's over $600 million for two one-time write-offs. The drugmaker had other non-recurring items as well.

Second, dividend payout ratios capture only a snapshot in time. They don't necessarily mean that a company won't be able to pay dividends in the future, because payout ratios don't convey any information about future earnings prospects.

Sales for cancer drug Ibrance and autoimmune disease drug Xeljanz are soaring. Both drugs could be approved for additional indications in the not-too-distant future. Pfizer's pipeline includes 94 programs, eight of which are awaiting regulatory approval and another 33 of which are in late-stage clinical studies.

Cash flow isn't scary at all

The better measure to look at in Pfizer's case is cash flow. And the company's cash flow doesn't look scary at all. This chart shows that Pfizer isn't having a problem paying dividends with its robust operating cash flow. It is true that the company's net cash used in financing activity was negative to the tune of nearly $6.7 billion in the first nine months of the year. However, the biggest factor behind that negative amount was buying back shares -- something Pfizer could stop any time it chooses.

Pfizer routinely states in its SEC filings that it believes that it will continue to have sufficient liquidity in the future for the company to continue paying and potentially increasing dividends. There is nothing in its financial results that should cause investors to doubt that's the case.

I think there's a lesson from the Scooby-Doo cartoons that applies to Pfizer's dividend payout ratio. In every episode, Scooby and friends investigate some scary monster. And every time, that supposed monster is unmasked at the end to reveal a not-so-scary person.

Pfizer's high dividend payout ratio looks frightening at first. A little sleuthing, though, unmasks that scary number to reveal a much less worrisome reality. With a yield of nearly 3.7%, Pfizer's dividend just might be tastier than a Scooby snack.