Most dividend-paying stocks send their investors a check on a quarterly basis, but did you know that some companies choose to do so on a monthly basis? They can be a great choice for anyone interested in giving his or her monthly income a boost.

With that in mind, let's look at three companies -- LTC Properties (NYSE:LTC), Vermillion Energy (NYSE:VET), and STAG Industrial (NYSE:STAG) --  that are all members of the monthly dividend payment club.

LTC Properties is a real estate investment trust -- or REIT -- that owns 216 healthcare properties in 30 U.S. states. These properties are primarily skilled-nursing or assisted-living facilities that cater to the elderly.

Rather than taking on the challenge of managing the facilities directly, LTC outsources the work. The company hand-picks a group of operators who keep an eye on the day-to-day happenings at each property, allowing LTC to stay focused on expanding its empire. 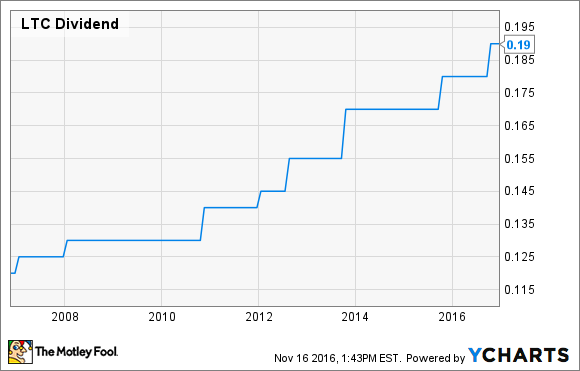 One trend that working in LTC's favor is the gradual graying of the American population. Each day, roughly 10,000 baby boomers turn 65, and the population of elders who need care is only going to go up. That should ensure that demand for skilled-nursing and assisted-living facilities remains strong for decades to come, which bodes well for LTC's future prospects.

Most U.S. investors probably haven't ever heard of Canada's Vermillion Energy. That's a shame, because it's been a phenomenal stock to own over the long term, generating an annualized return in excess of 29% since it first hit the public markets 22 years ago.

What's the secret to this company's success? In addition to being a terrific operator, Vermillion buys assets only in politically stable countries. Currently, the company owns and operates oil and gas fields in places the likes of the U.S., Canada, Europe, and Australia. By staying away from the parts of the world that are prone to political upheaval, Vermillion can continue to run smoothly.

What's exciting about Vermillion today is that its years of investing in an Irish gas field called Corrib are about to start paying off. The Corrib field just starting producing gas at the end of 2015, turning what had been adrain on the company's cash flow into a producer of cash. That suggests that its monthly payout could finally start to head higher, making right now an interesting time to consider getting in.

Not your typical REIT

The final stock on today's list is STAG Industrial, a REIT that specializes in buying industrial properties that house only a single occupant. That may sound like a risky business model, but since Stag owns hundreds of properties like this, its occupancy rates are actually quite stable.

What's brilliant about this strategy is that the most other REITs won't touch single-tenant properties, which means the competition for acquiring buildings tends to be just local mom-and-pop investors. That gives Stag a huge cost-of-capital advantage, which allows it to bid competitively and still win its fair share of deals.

Zooming out to the big picture, Stag estimates that its current market share is less than 1% of the $250 billion in total assets that fit its acquisition criteria. With a stated goal of growing its asset base by 25% annually, Stag has plenty of room left to run.

Stag has been paying out a monthly dividend since 2013 and has a history of steadily marching its payout higher. With a current yield of 6.2%, it might not be a bad time to give this unconventional REIT a closer look.