The growth in Facebook's (NASDAQ:FB) financials during the past year is unmistakable. Net income in the company's most recent quarter, for instance, is up a whopping 166% year over year, hitting $2.4 billion. But how are Facebook's user metrics performing? After all, Facebook's user base is ultimately the foundation of the social network's business model.

Despite the rise of new social networks -- Snapchat, in particular -- a range of metrics suggest Facebook's user base is both healthy and growing. 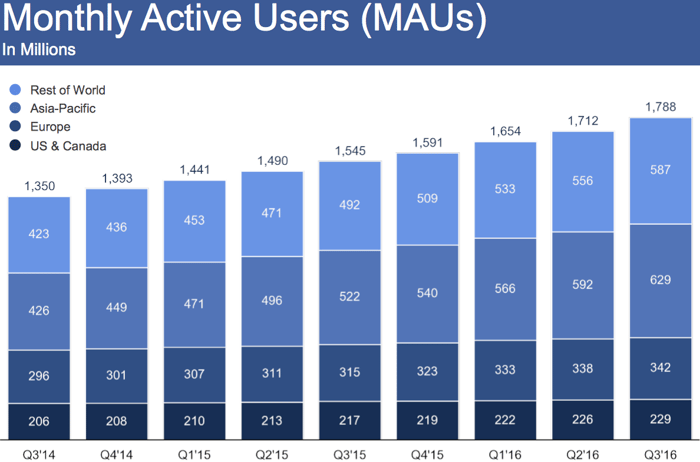 For a social network as big as Facebook, it's surprising the platform is still growing this fast. Continued growth puts the spotlight on the social network's mass-market appeal.

Twitter's comparatively worse situation for both its user base and user growth shows that every platform doesn't necessarily appeal across a range of demographics the way Facebook does.

Engagement is looking good, too

User engagement on Facebook, of course, is just as important as the size of the social network's user base. Fortunately, Facebook isn't letting investors down on this important metric, either. Measured by daily active users as a percentage of monthly active users, Facebook's engagement was 66% in Q3, up from 65% in the third quarter of 2015 and 64% in the same period two years ago.

And here are a few more intriguing engagement metrics to mull over. The election alone prompted 109 million people on Facebook during the first nine months of the year to make over 5.3 billion posts, comments, and likes related to the election. Facebook is apparently taking seriously its mission to connect the world.

What about Facebook's other social networks?

Of course, Facebook isn't just Facebook. The company has acquired other social platforms and spawned some of its own social products within the Facebook ecosystem. So even these metrics don't fully capture the reach of Facebook's network.

Consider the growth in monthly active users of some of Facebook's other social products during the past year.

User growth and engagement clearly remains one of Facebook's strengths. And given that every additional active user on Facebook's platforms increases the value of the platforms themselves, this is good news for investors. Facebook's network effect should keep users logged in -- and competitors at bay -- for years to come.
This article represents the opinion of the writer, who may disagree with the “official” recommendation position of a Motley Fool premium advisory service. We’re motley! Questioning an investing thesis -- even one of our own -- helps us all think critically about investing and make decisions that help us become smarter, happier, and richer.