The Mac maker does some homework.

Apple (AAPL 0.23%) might be thinking about doing the unthinkable: bringing iPhone production back home.

The Nikkei Asian Review is exclusively reporting that the Mac maker asked its two primary iPhone contract manufacturers, Foxconn and Pegatron, to evaluate the possibility of assembling iPhones in the U.S. Foxconn did an evaluation per Apple's request, but Pegatron reportedly didn't want to bother with it because of cost considerations. Apple's move wasn't in response to Donald Trump's election victory, but it's possible that the tech titan was exploring the idea pre-emptively. Apple made the request in June, and Trump's campaign focused heavily on using tariffs to encourage domestic manufacturing, while also demonizing Apple for manufacturing products abroad.

"How does it help us when they make it in China?"

The president-elect posed this question to supporters in March, vowing that he would "get Apple to start making their computers and their iPhones on our land, not in China." The answer is -- or at least should be -- incredibly obvious. China is the most efficient and cost-effective place for Apple to churn out hundreds of millions of iPhones. The Nikkei report quoted a source saying, "Making iPhones in the U.S. means the cost will more than double."

That is how it benefits U.S. consumers. Lower costs translate into lower retail prices. Apple has its margin target that it needs to hit, so any increases in its underlying cost structure will indubitably be passed along to consumers in the form of higher prices.

This isn't just about labor costs, either

The entire electronics supply chain is centralized in Asia, which yields logistics and research and development efficiencies. Having a supplier being physically located close to where the devices are produced makes it easier to address problems that arise and streamline the build-out of manufacturing infrastructure. For instance, here's a map of Apple suppliers: 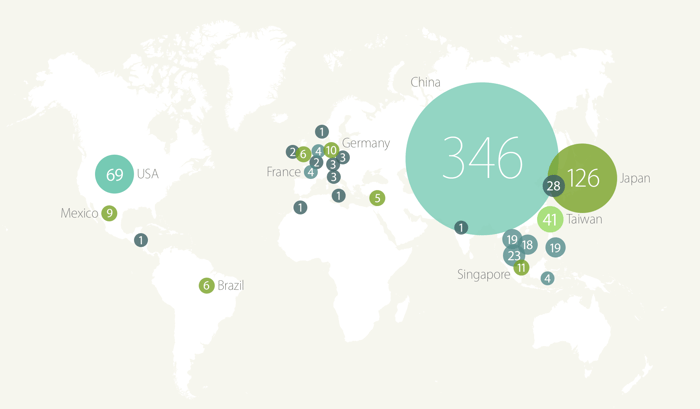 Apple has hundreds of suppliers across Asia. Image source: Apple.

Beyond cost, the labor pool in Asia is also much more able to handle this type of work. In an interview with Charlie Rose last December, CEO Tim Cook explained the situation:

Let me be clear, China put an enormous focus on manufacturing. In what we would call, you and I would call vocational kind of skills. The U.S., over time, began to stop having as many vocational kind of skills. I mean, you can take every tool and die maker in the United States and probably put them in a room that we're currently sitting in. In China, you would have to have multiple football fields.

Apple has to do its due diligence in researching the possibility. The company has to take Trump's rhetoric seriously, and evaluating options is completely expected. However, Apple will likely find that it's just not possible or worth it, even if Trump enacts some type of import tariff. It's a very real possibility that the costs to move manufacturing to the U.S. at a meaningful scale would be so prohibitive that it would be better to deal with a potential tariff.

The company has moved some manufacturing to the U.S., but those are lower-volume products like the Mac Pro. I don't think there's any realistic way that Apple moves the bulk of iPhone production stateside.