For a long time, you really couldn't go wrong with owning a telecom. These large companies were often protected by extremely high barriers to entry and some level of government regulation, and they offered sky-high dividend yields. To a certain degree, all of those things are still true today, but to a lesser extent.

Since the dawn of the Age of the Internet, the rules have been changing. Two of the smaller players in the telecom space are Frontier Communications (OTC:FTR) and T-Mobile (NASDAQ:TMUS). Not being members of the American duopoly of Verizon and AT&T -- whom together own 68% of U.S. wireless market share -- you might wonder if Frontier or T-Mobile is a better stock to buy today.

While we can't ever reach a definitive answer on that, there are three lenses through which we can view the question.

The telecom industry can be a brutal one. There are massive infrastructure requirements that involve billions in up-front costs -- things like renting space on towers, or laying down cables. As such, debt levels are usually pretty high.

That's why when telecoms can produce copious free cash flows (FCF), it's a big deal. It means that when times get tough -- either because of macro or company-specific issues -- the underlying company behind your investment will be safe.

Here's how Frontier and T-Mobile stack up:

In this light, T-Mobile is the clear winner. While the company has high debt levels, they are manageable given the company's profitability and FCF of about $1.5 billion. Frontier, on the other hand, is being weighed down by a mountain of debt -- in part because of the company's acquisition of properties from AT&T and Verizon in California, Connecticut, Texas, and Florida. While Frontier management has promised that the move would improve FCF over the long run, it puts the company in a tenuous position right now.

In essence, a sustainable competitive advantage is the special sauce that makes a company truly unique. Often called a "moat" in investing circles, this is what differentiates a company from its competitors -- and what will allow it to remain relevant for years to come.

In the telecom industry, high barriers to entry were often the key moat. They still are, but as I said in the outset, those barriers aren't quite as high as they used to be.

Historically, Frontier was simply a rural landline telephone company. I shouldn't have to explain why that doesn't make for a good investment. But the company expanded into business solutions surrounding both Internet connectivity and phone lines. And as I mentioned above, it recently bought properties from both Verizon and AT&T in some of the nation's biggest markets.

The problem is that the switchover in those states has not gone well. Customers have complained about bad service, and they have been leaving for competitors. That's really bad news.

T-Mobile, on the other hand, has relied upon a quirky and aggressive approach to set itself apart. Currently, it owns about 17% of the U.S. wireless market -- a large jump from the 11% it held back in 2011.

A big reason for that jump is the company's commitment to improved customer service and its branding as the "Un-carrier." In essence, the company was the first to offer no-contract plans. By doubling down on customer service, management was betting that customers would stay -- and appreciate that they had a say in the matter.

While neither moat is particularly strong, I think T-Mobile clearly comes out ahead.

Usually, I devote this space to talking about valuation, but a company's dividend yield is usually in direct correlation to how expensive or cheap it is. Plus, telecom investors are usually more interested in the dividend than anything else.

For such investors, no metric is more important than a company's free cash flow. It is from FCF that dividends are paid, and FCF represents an important thermometer for how healthy a dividend is. Ideally, you'd like to see a telecom using less than 90% of its FCF to make its payout.

Here's how the two companies have fared over the past four years. 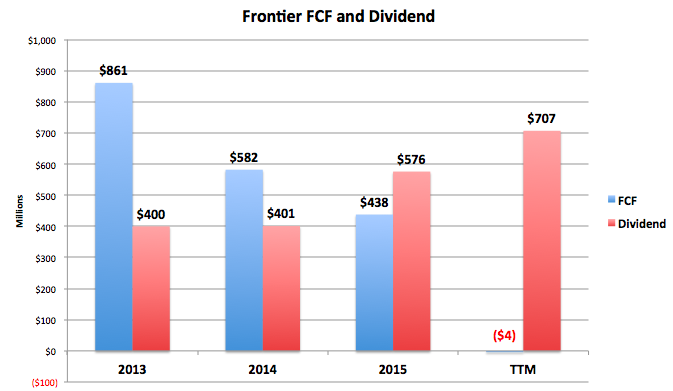 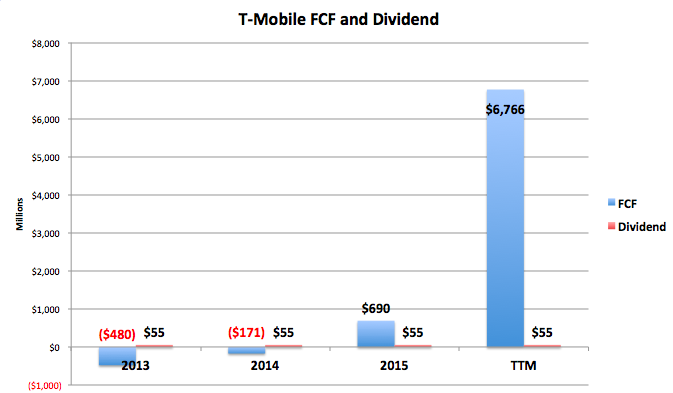 This is really the story of two companies heading in completely opposite directions. Back in 2013, Frontier only needed 46% of its FCF to pay dividends to its shareholders. Fast-forward to today, and the company is paying out $707 million in dividends, while losing money on a FCF-basis.

T-Mobile, on the other hand, was FCF negative for both 2013 and 2014. Over the past two years, though, its strategy has really paid off. Over the past 12 months, only a measly 0.8% of FCF was used on the dividend.

What's key here is that the dividend is only offered for preferred stock. In other words, you and I are unlikely to see a benefit immediately from these prodigious free cash flows. And while the company's website states, "T-Mobile US does not have any plans to pay a dividend on its common stock at this time," it's clear that the table is now set for a dividend to start coming.

Given this, and that fact that Frontier's payout seems very unsustainable, I'm giving the nod here to T-Mobile.

So, there you have it: On almost every metric, T-Mobile appears to be the superior stock in this match-up. While that doesn't mean a ringing endorsement from me (I don't own shares myself), I think you're better off researching T-Mobile over Frontier, even though the latter offers a huge 12.2% yield.