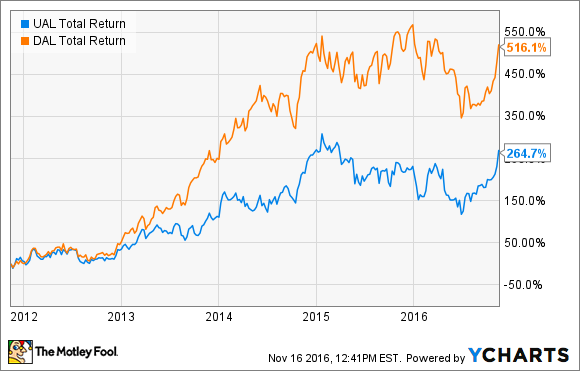 On Tuesday, United Continental's new management team laid out an ambitious plan to boost the company's earnings power by $4.8 billion by 2020, relative to 2015. This would allow it to overtake Delta in terms of profit margin. Let's take a look at the key pillars of this profit growth plan and whether it is realistic.

United's management team sees the company's margin gap relative to Delta as mainly a revenue problem. To fix this, it will focus on three main areas over the next few years.

First, United Airlines is following the industry trend toward greater segmentation. In other words, it wants to find new ways to offer low fares for the most price-sensitive travelers while charging more to customers who want all of the amenities of a full-service airline like United. It sees this as a $1 billion revenue opportunity between now and 2020.

The key to this strategy is a new basic economy fare that United will roll out in early 2017. Going forward, customers who buy the cheapest tickets won't be able to choose seats in advance or bring carry-on bags that would need to go in the overhead bin. United is also evaluating following Delta and American Airlines by putting premium economy seats on long-haul flights.

Second, United Airlines is working to improve its revenue management system. While the details are complex, the company's automated system is no longer optimized to maximize the revenue produced by each seat. Fixing these problems could boost unit revenue by 2-4 percentage points, adding $900 million to United's top and bottom lines by 2020.

Third, United plans to boost the performance of several key hubs, primarily by implementing "banked" schedules that facilitate more connections. That should help the carrier to get its fair share of domestic revenue relative to Delta Air Lines and American Airlines. This initiative could add $600 million in incremental revenue by 2020.

Additionally, United Continental plans to continue its efforts to squeeze more seats onto each plane and to fly larger planes in the coming years. Both initiatives will tend to reduce unit costs. This could generate $1 billion in incremental revenue by 2020 (relative to 2015), including the impact of increasing the proportion of premium seats.

Actual earnings growth will be less than advertised

While United's management has highlighted a $4.8 billion profit growth opportunity, its actual pre-tax improvement is likely to be much smaller. For one thing, United is using 2015 as a baseline. Using this year as a baseline instead, the remaining opportunity would be $3.9 billion.

Furthermore, the airline industry probably reached peak profitability over the past year. In the next few years, legacy carriers like United and Delta will face stepped-up competition from ultra-low cost carriers, in both the domestic and transatlantic markets. Meanwhile, rising fuel prices and labor cost increases will drive unit costs higher.

United and Delta will both have to combat rising budget carrier competition. Image source: The Motley Fool.

United has already projected that its Q4 pre-tax margin will be just 5%-7%, down from 10.4% a year ago. And analysts expect earnings per share to plunge nearly 25% in 2017, despite United's projection that it will accrue another $900 million of incremental profit from its various earnings initiatives next year.

United Continental may return to earnings growth later in the decade as these initiatives gain traction and cost headwinds abate. But its pre-tax earnings growth relative to the past 12 months will likely be a small fraction of the $4.8 billion number it is throwing around.

I am also skeptical that United will be able to overtake Delta Air Lines in terms of profitability by 2020.

United's management contends that more than 60% of the earnings improvement opportunity it has identified is unique to United Airlines. However, it is probably underestimating the earnings levers available to Delta (or perhaps overestimating its own opportunities).

For example, United estimated that half of its $1 billion fleet-related opportunity is unique to the company. Yet Delta has about 200 mainline planes scheduled for delivery between now and 2020: far more than United. While United has more room for improvement on the regional side of the business, its net advantage is probably a lot smaller than $500 million.

Additionally, Delta may benefit from having its top hubs in somewhat smaller metro areas where it is truly dominant. As ultra-low cost carriers expand in the coming years, they are likely to start with the biggest markets. This means that they would cannibalize United's business faster than Delta's.

For all its flaws, United's profit improvement plan should at least help it narrow the profitability gap with Delta over time. With United's market cap being 40% below that of Delta right now, this may be enough to drive the stock higher.