Warren Buffett's forever-style investing approach has made him one of the planet's wealthiest people and the poster child of long-term investing. His tremendous success over the past 50 years suggests that investors ought to pay attention to what stocks he's buying, but it also suggests that they might want to focus even more on what stocks he's selling. Fortunately, Warren Buffett's Berkshire Hathaway (NYSE:BRK.B) (NYSE:BRK.A) files a 13F report with the SEC that shows what he's been selling, and according to the most recent filing, Suncor Energy (NYSE:SU), Wal-Mart Stores (NYSE:WMT), and Deere & Co. (NYSE:DE) have all fallen out of favor with the Oracle of Omaha.

Read on to learn more about these companies, why Warren Buffett might be selling shares, and whether or not you should follow his footsteps away from the stocks.

Giving up on oil sands

Warren Buffett sold 7.7 million shares of Suncor Energy in the second quarter and in the third quarter, he unloaded the rest of his remaining 22.3 million shares.

His decision to sell shares in the large Canadian oil-sands player might have stemmed from increasing concern that global oil and gas prices would remain under pressure for the foreseeable future. Rising U.S. production has caused oil and gas prices to slump significantly in the past year, and that's taken a toll on companies like Suncor that make their money producing, refining, and marketing oil products. While the company earned over $4 billion a few years ago, its net loss totals $1.6 billion over the past 12 months: 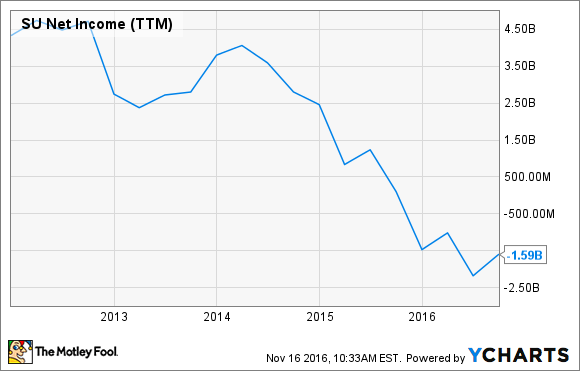 Warren Buffett's decision could also have been influenced by Suncor's spending plans. In June, Suncor diluted investors with a 82.2 million share offering that raised $2.9 billion in capital. Suncor plans on using the money for acquisitions.

Ultimately, Suncor could swing back to a profit if oil and gas prices bounce back. Its M&A (mergers and acquisitions) plans could also pay off long-term. Nevertheless, uncertainty related to both of these factors appears to have convinced Buffett that it's better to wait and watch from the sidelines.

Cooling off on competition

Wal-Mart has been a Warren Buffett holding for years, but he's soured on the stock this past year in the face of rising competition from online retail giant Amazon.com.

If that's the case, then it marks a seismic shift in his opinion of the company, which has been steadily losing wallet share to online retailers. In a bid to keep those competitors at bay, Wal-Mart has taken a hard line with suppliers lately that may indicate a profit-unfriendly price war is afoot. Now that we're bumping up on the ever-important holiday shopping season, Warren Buffett's selling doesn't add confidence that Wal-Mart can fend off its online rival anytime soon, and that could be reason enough for you to head for the exit too.

Until recently, Warren Buffett had been increasing Berkshire Hathaway's exposure to Deere & Co. However, Warren Buffett used some of Deere's rally this past summer to pare back his stake in the farm-machinery Goliath.

Warren Buffett sold 874,185 shares in Deere & Co. in the third quarter, reducing his stake by 3.98% to 21.1 million shares. Despite the selling, Berkshire Hathaway remains Deere's biggest institutional investor, but that could change if Warren Buffett's outlook on grain prices and farm income shifts, due to the election of Donald Trump as America's next president.

Although Deere & Co. shares are up 22% this year, the company's profit has slumped substantially as farm income has declined to its lowest point since the Great Recession. Through the first nine months of the year, Deere & Co.'s $1.24 billion profit was considerably lower than the $1.59 billion profit it posted in the comparable period of 2015. Deere & Co.'s global equipment sales declined 14% year over year in Q3, suggesting that slowing machinery demand continues to drag on the bottom line.

So far, Warren Buffett has looked beyond this year's slide in demand and profit, toward rising global food demand driven by an increasingly larger population. Now that Trump's secured the White House, Deere's potential to tap into that opportunity might change. The company could benefit from rising infrastructure spending, but a strong dollar and a trade war with China, Mexico, and Canada could offset much, if not all, of that benefit.

Overall, it's anyone's guess how Warren Buffett will weigh these competing factors, so investors will want to keep close tabs on Berkshire Hathaway's 13F over the next couple quarters to see whether his selling accelerates.