Two of the biggest media companies in the world, Walt Disney Co (NYSE:DIS) and Time Warner (NYSE:TWX), are responsible for much of the video entertainment we consume today, whether it be on television or in the movie theater.

Time Warner's empire includes the Turner channels, TNT, TBS, CNN, and TCM, as well the valuable HBO and Warner Bros. studios. Disney claims its famous parks and resorts, including Disney World and Disneyland, a host of media network such as ABC, ESPN, and the Disney Channel, its studio arm, which includes Marvel, Pixar, and Lucasfilm, and consumer products such as toys and its retail stores.

Both stocks have faced similar challenges recently with the rise of cord-cutting, but they have mostly traveled in tandem for the last five years, as the chart below shows. 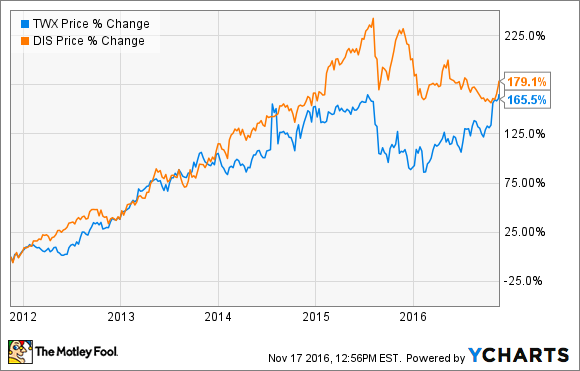 Still, there are some important differences between the two companies that could cause their paths to diverge in the coming years. Let's take a closer look at what each company has to offer.

Disney is much more than the traditional assets associated with that name these days. In fact, the company's most important property may be ESPN, the sports media powerhouse and the most valuable cable network, which charges subscribers upwards of $7, far more than any other cable channel.

However, Disney stock has struggled since CEO Bob Iger acknowledged last summer that the network was losing subscribers. Following its earnings report earlier this month, the stock briefly sold off after Nielsen reported the company had lost 621,000 subscribers in just October, a figure Disney disputed. But Iger reassured investors that ESPN was just going through a transition phase, and that it still had a viable future ahead of it. So-called skinny bundles have mitigated subscriber losses, and the company sees a promising future connecting to customers digitally and through mobile devices -- and Iger said ESPN translates well to mobile.

Outside of ESPN, results remain strong. Adjusted EPS grew 12% last year, and Iger's strategy of acquiring studios with intellectual property like Pixar, Marvel, and LucasFilm, which the company can then leverage into movies, rides, and toys, has been overwhelmingly successful and is a unique asset of Disney's. While growth is expected to be slow for the current year, the long-term picture still looks solid.

Time Warner shares spiked in October when it said it would be acquired by AT&T (NYSE:T) for $85 billion, or $107.50 a share. An acquisition seems like a fitting coda for a company that is perhaps best-known for a series of mergers, starting with Time Inc and Warner Bros., which then merged with AOL in what's recognized as one of the worst mergers of all time. Time Warner later dumped AOL and Time Inc, which owns several newsmagazine outlets.

Time Warner shares jumped more than 10% on the news over a two-day period, but still trade at a substantial discount to the buyout price -- nearly 20% less. That's a sign that the market believes regulators could block the deal. Before being elected president, Donald Trump said he would not allow the tie-up, and that decision is seen as an indicator of his attitude toward big business mergers. Even if it passes, the deal will face substantial regulatory scrutiny before it's cleared.

Like Disney, Time Warner faces a substantial threat from cord-cutting, as about 80% of its operating income comes from its cable networks. It's already gone over-the-top with HBO Now, though reports indicate that the streaming service has been slow to add subscribers. The company's willingness to sell itself to AT&T also seems to be an indication that CEO Jeff Bewkes believes the company is better off joining with a service provider like AT&T that can connect Time Warner's content directly to customers. In other words, the stock may struggle to reach $107.50 without it in his view. In the recent earnings report, Bewkes said, "Combining with AT&T is the natural next step in the evolution of our business and allows us to significantly accelerate our most important strategies."

Disney by a whisker

Both stocks are facing similar secular challenges, and are valued at nearly the same P/E ratios. But Disney's wealth of intellectual property and its ability to leverage that content with its theme parks, toy licensing, and video entertainment makes it a stand-out company in the media industry. Though the decline of ESPN will present short-term headwinds, the company's other businesses appear to have solid growth ahead of them.

Time Warner's stock could pop if the merger with AT&T is approved, but its long-term prospects look dimmer as it's even more dependent on the traditional Pay-TV ecosystem.

Disney looks to be the better buy here.