In a surprise announcement on Friday, Facebook (NASDAQ:FB) said it plans to buy back $6 billion worth of its own stock. Further, in a separate filing with the Securities and Exchange Commission, the social network also announced its chief accounting officer is stepping down. Here's a closer look at these announcements, and what they mean for investors.

Facebook's board of directors has "authorized the Company to repurchase up to $6 billion of its Class A common stock," read the company's SEC filing on Friday. The $6 billion repurchase program will begin during the first quarter of 2017 and does not have an expiration date.

In the SEC filing, Facebook provided some insight into how management will think about the timing of repurchases:

The timing and actual number of shares repurchased will depend on a variety of factors, including price, general business and market conditions, and alternative investment opportunities. The program will be executed consistent with the Company's capital allocation strategy of prioritizing investment to grow the business over the long term.

In other words, Facebook management will likely have shareholders' best interests in mind when it makes repurchase decisions, attempting to maximize per-share intrinsic value over the long haul.

Facebook's decision to repurchase shares follows a recent pullback in the stock, suggesting management may be attempting to be opportunistic with the buyback program. Shares are down about 8.8% since Nov. 2, when Facebook reported third-quarter results and called 2017 "an aggressive investment year." 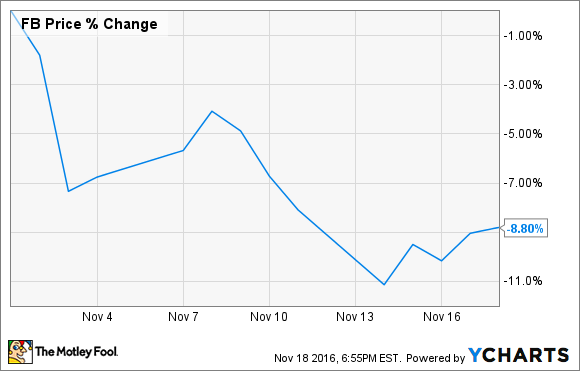 Given how Facebook's big investment years have panned out for long-term investors in the past, it could be argued that this pullback in the share price truly is creating a buying opportunity for both investors and -- now that it has permission to pull the trigger -- Facebook.

In addition to being opportunistic, Facebook's board may also simply be trying to indirectly return some of its excess cash to shareholders through repurchases. Facebook's cash and marketable securities in the company's most recent quarter swelled to $26.2 billion, up significantly from its $18.4 billion in the year-ago quarter.

Not only is Facebook's cash balance increasing, but so is its ability to generate this cash. The company's free cash flow, or cash from operations minus capital expenditures, was $2.5 billion in its most recent quarter, up from $1.4 billion in the year-ago quarter.

In a separate (and probably unrelated) announcement, Facebook also said its chief accounting officer, Jas Athwal, notified Facebook in November of plans to resign from the company. His resignation follows nine years at Facebook.

Athwal will remain at the company until February 17, staying long enough to oversee the company's year-end audit and file its annual report.

"In the meantime, the Company plans to launch a search for a new CAO, and Mr. Athwal will assist with the transition," Facebook said in its SEC filing.

Overall, these announcements shouldn't impact an investing thesis in the company.

Given that a $6 billion repurchase is a relatively small portion of the company's enormous $338 billion market capitalization, its impact on per-share intrinsic value will be hardly noticeable. On the other hand, it's encouraging to see management being opportunistic, and this buyback authorization is also likely a sign of more repurchases to come.

And Athwal's resignation is arguably a nonevent. Stepping down after nine years at a company as big as Facebook is not out of the norm -- particularly following Facebook stock's incredible 200% plus rise since its initial public offering in 2012.