Thursday afternoon, Tesla Motors (NASDAQ:TSLA) announced shareholders voted overwhelmingly in favor of the company's acquisition of SolarCity (NASDAQ:SCTY.DL). With shareholders on board, the company said the transaction will take place in "the coming days."

As shareholders approved the deal, Musk made some statements and answered some questions in a shareholder meeting in Fremont, California, on Thursday. Here's what the CEO of the soon-to-be combined companies had to say about the acquisition.

How much will Tesla's solar roof cost?

After jointly unveiling solar roof cells in conjunction with SolarCity in October, some questions about the new product have lingered. Chief among the missing information about the new product are specifics regarding pricing. On Thursday, Musk gave investors a vague yet useful idea of what to expect:

It is really going to be, I think, some amazing stuff that comes out [of the acquisition]. In fact, I was just meeting with the SolarCity engineering team and -- I don't want to 100% commit to this yet -- it's looking quite promising that a solar roof will actually cost less than a normal roof before you even take the value of electricity [savings] into account.

As Musk went on to explain, achieving this would create an incredibly compelling value proposition for Tesla's new solar roof.

So, the basic proposition would be: "Would you like a roof that looks better than a normal roof, lasts twice as long, costs less, and -- by the way -- generates electricity?" It's like, why would you get anything else?

The solar roof unveiled jointly by SolarCity and Tesla was developed entirely by the two companies, Musk said. Further, he noted that "90% plus of the technology is owned by our combined company."

Musk did say Tesla "may or may not use a film from 3M, but the use of the film for the particular application that we were talking about was something that we came up with."

We expect to start doing the solar roofs in volume in the summer of next year. There's four main types ... and we'll roll them out one at a time, probably in three-month intervals.

Will all of the tiles have a built-in solar cell?

One shareholder asked, after noting that some areas of roofs are heavily shaded, whether or not all the tiles would actually have built-in solar cells. 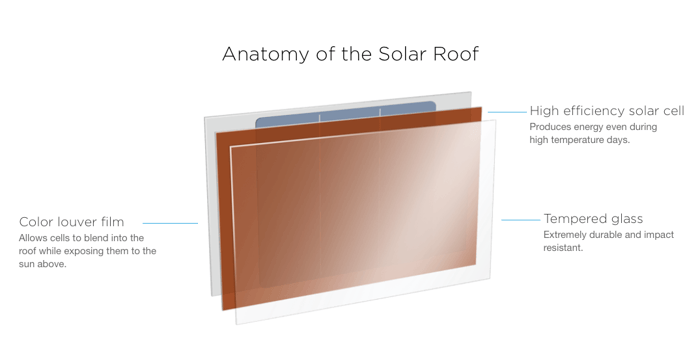 Admitting it wouldn't make sense for all of the tiles to have solar cells, Musk said, "Some will not, but it's important they aesthetically look the same."

Concerned about a political landscape that may not be supportive of green incentives, one shareholder asked about solar subsidies' importance to Tesla's business now that it will own SolarCity.

Currently, there's a 30% investment tax credit for solar panels. But Musk isn't banking on incentives for the solar roof, he seemed to suggest. Referencing the company's aim to sell the roof for around the same price of traditional roofing options, without taking into account any savings from electricity, Musk said, "assuming that pans out, subsidies don't really matter."

With the acquisition closing in the coming days, and with Tesla preparing to produce its solar roofs in volume next summer, investors may want to continue to keep tabs on the company's plans for its foray into the solar market with SolarCity.