One stock with a few bad bullish arguments is GoPro (NASDAQ:GPRO), which has lost more than half its market value over the past 12 months. Let's examine five common bullish arguments, and why they're all terribly flawed.

Many GoPro bulls claim that the company's action cameras will become popular capture devices for the 360-degree videos that can be viewed on Alphabet's (NASDAQ:GOOG) (NASDAQ:GOOGL) YouTube, social media, and various other VR headsets. YouTube previously partnered with GoPro to launch its 16-camera Odyssey VR rig, and it now offers the six-camera Omni rig at a lower price.

Unfortunately, the $15,000 Odyssey and the $5,000 Omni still both cost far too much for mainstream consumers, and stand-alone 360-degree cameras like Samsung's Gear 360 and Ricoh's Theta offer a similar experience for a few hundred dollars. Those cameras aren't as powerful as GoPro's rigs, but their smaller form factors and lower prices make them much more appealing to mainstream consumers.

That's why YouTube made its 360-degree video platform compatible with those cheaper cameras. GoPro then launched its own app, GoPro VR, to host its own 360-degree content, but it's unlikely to match the popularity of YouTube's 360-degree videos.

Many investors expected the Karma drone to juice GoPro's holiday quarter sales and bring it back to quarterly profitability. After being delayed earlier this year, the Karma finally arrived in September amid pricing conflicts with retailers, supply chain issues, and lukewarm reviews. The drone was then recalled in early November after multiple units randomly lost power and crashed.

3. "It will eventually reach mainstream consumers."

Unfortunately, GoPro has repeatedly failed to gain ground in this market. The scattergun strategy it employed with low-end and mid-range cameras flopped last year, and the Session -- initially marketed as a premium device for mainstream users -- failed to find buyers until its price was halved.

There's still no indication that mainstream users want to buy an extra action camera when they always have their phones on hand, which means that GoPro will still struggle to grow beyond its original niche market.

4. "It will expand its cloud and media ecosystems."

Another common belief is that GoPro can expand beyond hardware with its new GoPro Plus cloud platform and the production of original media content. But as I explained in a previous article, GoPro Plus only backs up reduced-quality videos to the cloud.

GoPro's hardcore users are more likely to pay $5 per month for GoPro Plus, but the low-quality backups will also likely turn them away. Meanwhile, mainstream smartphone users will likely scoff at the idea of paying for a backup service which Google Photos offers for free.

As for its "media expansion", it's a promise that GoPro made prior to its IPO two years ago and still hasn't fulfilled it. Gaining millions of subscribers on YouTube doesn't "make" a media business, and it's unclear how developing original content will help it sell more cameras.

At first glance, GoPro stock looks cheap, with a price-to-sales ratio of 1.3. However, that P/S ratio is meaningless if GoPro's revenues continue falling year-over-year. Analysts currently expect GoPro's revenue to fall 23% this year, compared to 16% growth in 2015. 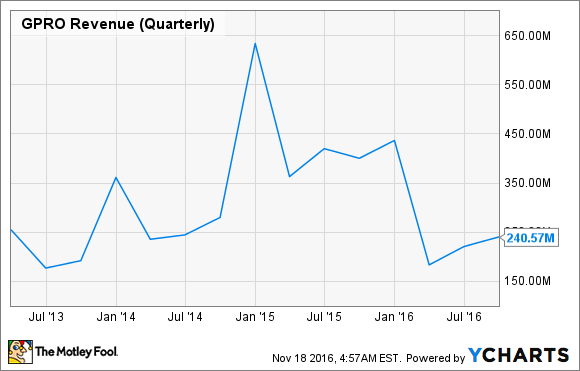 If you expect GoPro's revenue and profits to soar back to late 2014 levels, GoPro stock would certainly be cheap at current prices. However, the commoditization of the action camera market, the company's dismal debut in the drone market, and its questionable plans for ecosystem expansion all indicate that it's unlikely to happen anytime soon.

Like many investors, I once believed in GoPro's narrative of expanding beyond cameras and building a cloud and media-based ecosystem. However, I finally sold my shares after the company repeatedly proved that it was unable to accomplish those goals.

Looking ahead, investors might believe that VR, drones, ecosystem expansion, and marketing blitzes might get it back on track. However, I won't believe any of those efforts until I see them generate real revenue and earnings growth.