Intuitive Surgical (NASDAQ:ISRG) and Accuray (NASDAQ:ARAY) are both medical device companies that sell expensive systems to hospitals, but the similarities between the two end right there. Intuitive has been a multibagger for shareholders who got in at the initial public offering and has produced a string of healthy earnings reports recently. Accuray, on the other hand, has been a massive long-term loser and has fallen short of the market's expectations in recent quarters.

Understandably, shares of the two medical-device companies have headed in opposite directions in 2016. 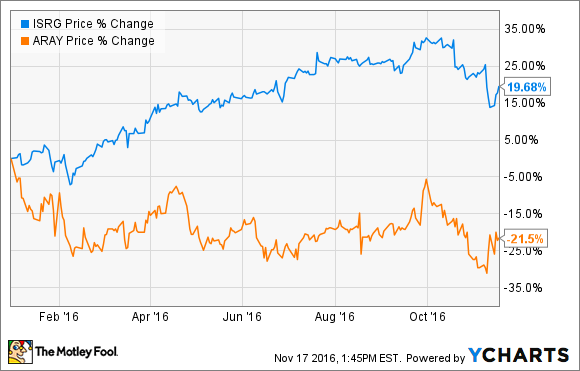 Of course, investors who are looking to get in today should only care about which company has a brighter future, so let's run through the bull case for both companies to see which is the better buy today.

Accuray is a developer of radiosurgery and radiation therapy systems that are used to detect and remove cancerous tumors. Accuray's flagship product, the CyberKnife, uses lasers to deliver concentrated doses of radiation into the body to destroy cancerous cells. The process is pain-free and minimally invasive, and it also spares healthy cells. That makes it a great choice for tumors that would otherwise be inoperable.

Beyond CyberKnife, Accuray's other major product is the TomoTherapy system. This device produces advanced imagery that can precisely locate tumors in the body prior to initiating radiation therapy.

As you'd expect, neither of these devices is cheap. Various news reports suggest that both devices are multimillion-dollar purchases for hospitals, which is one of the reasons that the company has had a hard time gaining rapid adoption.

Still, Accuray's sales have grown significantly over the years as providers have gradually warmed up to the products. However, the company's costs have largely kept pace with sales gains, so Accuray has struggled to turn those gains into profits. 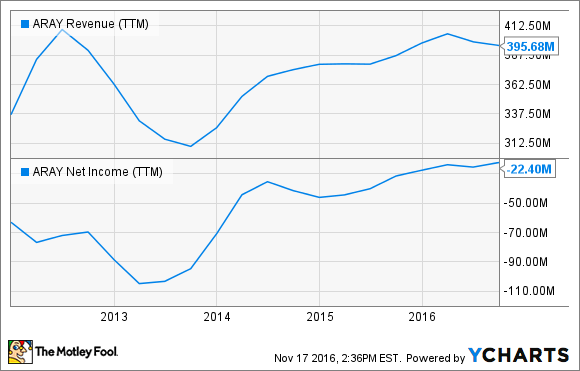 More recently, investors have seen signs that demand for Accuray's products might be picking up. Last quarter net orders grew 19% year over year, and backlog grew by 8%. The company is getting a lot of buzz about the upcoming launch of its new product, called Radixact, which combines treatment planning, treatment delivery, and data management.

That all sounds promising, but management still isn't exactly expecting growth to take off. Next year the company is projecting top-line growth between 3% and 5%, which likely won't be enough to turn the company profitable. Those are not exactly inspiring numbers for a company that is unprofitable, so it's hard to believe that the stock will be able to bounce out of its current funk.

The device has largely been embraced by the medical community since it was first launched in 2000. As of the third quarter, the company counted a worldwide installed base of 3,803 da Vinci systems, with two-thirds of those residing in the U.S.

That install base growth is impressive, but what has turned Intuitive into such a financial powerhouse is its razor-and-razor-blade business model. Each procedure that is performed on a da Vinci requires the use of disposable products, which creates a recurring revenue stream for the company. In addition, each system requires the signing of an annual service contract, which further builds out the company's revenue. In total, roughly 70% of the company's sales are recurring, which has helped to make its revenue and profits quite predictable.

Looking ahead, Intuitive has a number of initiatives in place that should lead to growth. For one, the company continues to find new surgical procedures that can be performed on its systems. Two types of operations that should drive growth in the near term are colorectal surgeries and hernia repairs, but there are other areas that Intuitive is exploring. In addition, the company continues to expand its geographic reach, with Europe and Asia being the primary growth-drivers.

When adding these opportunities together, Wall Street is projecting that Intuitive's bottom line will grow at nearly 13% annually over the next five years. That's a solid growth rate for a company that's trading at roughly 26 times next year's earnings estimates.

While it is entirely possible that Accuray might turn into a growth stock from here, I believe that Intuitive Surgical is the better bet. The company is growing quickly, holds a dominant market position, and has a business model that kicks off boatloads of cash each year that can be used to reward shareholders. Those factors have turned me into a happy shareholder, so I can't help but feel that it is the better bet for new money today.