In a prior column, I reported that Intel's (NASDAQ:INTC) upcoming Coffee Lake family of processors would be based on the company's upcoming Cannon Lake architecture, based on information found on Intel's website.

However, instead of being built in Intel's upcoming 10-nanometer manufacturing technology as the proper Cannon Lake products will be, the Coffee Lake parts are expected to be built using some derivative of the 14-nanometer technology first introduced in the second half of 2014.

However, a new rumor from a user on the AnandTech forums suggests that at least part of this is not correct. Let's take a closer look.

Coffee Lake may be based on Kaby Lake architecture

According to user Borealis7 on the AnandTech forums, Coffee Lake for desktops will include six processor cores, use Intel's Kaby Lake architecture, and arrive in 2018. The bits about core count and launch date were already previously leaked, but the information about its being based on the Kaby Lake architecture is new.

Indeed, the information Intel had inadvertently made public on its website suggested that Coffee Lake was referred to internally as Cannon Lake, implying that it would include updated processor cores and graphics.

If the information from Borealis7 is correct, then it would seem that Coffee Lake for desktops is essentially Kaby Lake, but with up to six processor cores rather than up to four, from an architectural perspective.

More cores and better 14-nanometer tech to do the trick?

Assuming Borealis7's information is good, then it means that for desktops as well as high-performance notebooks, Intel will essentially have used the same basic Skylake processor and graphics architecture that first debuted in the fall of 2015 for three full product generations. Remember: Kaby Lake used the Skylake architecture, with the performance gains coming primarily from an enhanced 14-nanometer process technology.

If Borealis7 is right, then Intel seems to be betting that additional cores coupled with a yet-again improved 14-nanometer manufacturing technology (see the following slide) will combine to deliver enough of a performance boost to make the Coffee Lake family worthy of being branded eighth-generation Core. 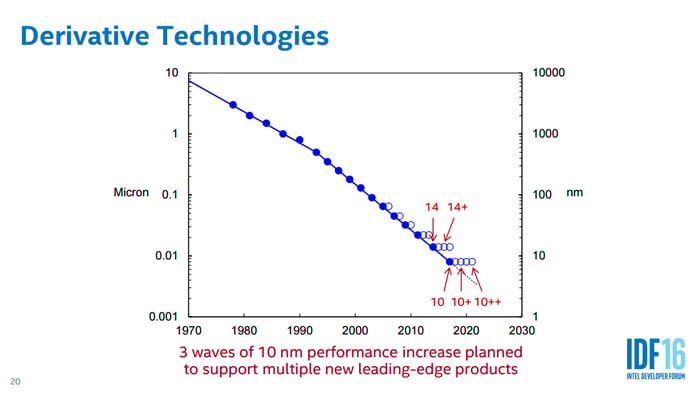 Intel claimed to achieve a 12% improvement in its 14-nanometer+ relative to 14-nanometer, and if it can deliver a manufacturing technology-related boost of at least that much with the 14-nanometer derivative it uses to build Coffee Lake, then this -- coupled with the increased core count -- could make Coffee Lake at least as compelling a product offering, relatively speaking, as Kaby Lake will be in desktop computers.

All eyes on Ice Lake and beyond

It's good to see that Intel is delivering on its commitment to deliver performance improvements for desktop personal computers each year. Nevertheless, I think that Intel can be more aggressive in bringing new processor architectures to its desktop processor families going forward, accelerating its generation-over-generation performance improvements.

Indeed, given Intel's gargantuan research and development budget, which in 2015 topped $12 billion, recycling an architecture for three full generations -- even though Intel is planning to deliver performance improvements with each generation -- doesn't sit right.

We'll see if this is what Intel ultimately does over the next year or so.