In a recently released SEC filing, it was revealed that Warren Buffett-led Berkshire Hathaway (NYSE:BRK.A) (NYSE:BRK.B) had opened new stakes in all four major U.S. airlines, which came as a big surprise to many of the company's shareholders, myself included. In addition, Buffett and company got rid of more than two-thirds of a stake it has held for some time. Here are the details of these two moves and why the company might have made them.

A surprising bet on airlines

This was a surprise to Berkshire shareholders, particularly because Buffett has been negative on airlines throughout much of his investing career, ever since a 1989 investment in US Airways preferred stock went sour.

For the next several years, he referred to the investment as a mistake, and in 2007 he said, "The worst sort of business is one that grows rapidly, requires significant capital to engender the growth, then earns little or no money. Think airlines."

Per his usual policy, Buffett didn't say why he made the airline investments, but there are a few things Berkshire followers should know. For starters, as my colleague Adam Levine-Weinberg pointed out in a separate article, airline stocks plunged in late June in the wake of the Brexit vote, just before the start of the third quarter. In fact, a couple of the airlines have rallied by more than 50% since then. So, it's possible that Buffett or his stock pickers simply saw deeply undervalued stocks and wanted to take advantage. 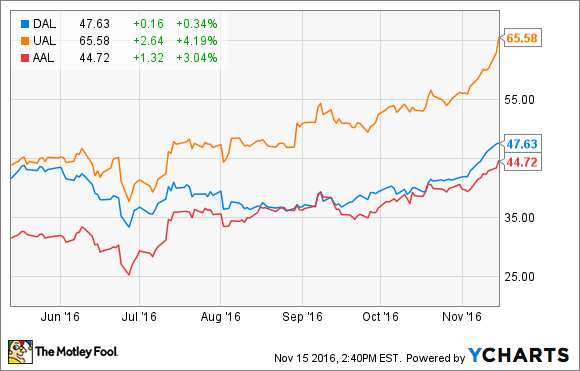 In addition, the airline business has changed significantly since Buffett last dipped his toes in the water. Airlines have done a good job of keeping expenses in check in recent years, and have produced strong margins. All are generating strong cash flow, and have been aggressive about returning capital to shareholders.

In a less-surprising move, Berkshire reported that it got rid of about 70% of its stake in Wal-Mart Stores (NYSE:WMT), a large amount of stock that is valued at about $2.1 billion as I write this.

I say that this isn't much of a surprise for a couple of reasons. First, Berkshire has been disposing of its Wal-Mart stake in recent quarters. The previous sales have been much smaller, but it has become clear that Berkshire has a somewhat bearish view of Wal-Mart right now.

While we don't know for sure exactly why Berkshire is getting rid of Wal-Mart, I can say with confidence that it is becoming less of a "Buffett stock." Specifically, it has been gradually losing the competitive advantage it enjoyed in the pre-internet economy. In its prime, Wal-Mart was able to undercut virtually every other retailer, thanks to its scale, no-frills store design, and efficient distribution network.

These days, this simply isn't the case. Internet retailers, particularly Amazon.com, can operate just as efficiently as Wal-Mart, and as a result, Wal-Mart's market share has begun to erode. To be perfectly clear, Wal-Mart will be just fine as a business, but an eroding market share and competitive advantage are the exact opposite of what Warren Buffett likes to see in his stock investments.

Not necessarily. I wouldn't go so far as to call the airlines a bad investment right now, but it's safe to say that they're significantly more expensive than the price Buffett paid for them. And Wal-Mart still has a bright future ahead of it, in my opinion, so I'd be reluctant to sell if I were already a shareholder.

It can be a great idea to follow the moves of billionaire investors -- not necessarily to make the same moves, but for the investing lessons that can be learned. For example, in Wal-Mart's case, the lesson is "when the reasons you originally bought a stock no longer apply, it's time to reevaluate your investment." There are valuable lessons you can learn from all of Buffett's investment activity, so it's important to read between the lines when he (or another billionaire) buys or sells a stock.