When we own portions of outstanding businesses with outstanding managements, our favorite holding period is forever. - Warren Buffet

Warren Buffett certainly knows a thing or two about successful investing. He has minted his shareholders a fortune by purchasing great businesses and then hanging onto them for the ultra long-term. Knowing that, we asked a team of Fools to share a stock that they would happily hang on to for the next two decades. Read on to see why they picked Walt Disney (NYSE:DIS), Canadian National Railway (NYSE:CNI), Broadridge Financial Solutions (NYSE:BR), Wal-Mart (NYSE:WMT), and Universal Display (NASDAQ:OLED)

Don't count out the House of Mouse

One company that investors of all ages can appreciate is Walt Disney. From its kid-oriented animated movies to its multimedia presence and major television networks like ESPN and ABC, Disney's reach spans all demographics. Moreover, its content acquisition spree of the past decade has only added more depth to its bench, with purchases of Pixar, Marvel, and Lucasfilm giving it access to powerful franchises like Toy Story, Avengers, and Star Wars.

Many investors have been nervous about Disney lately, arguing that the company could suffer from a potentially industry-changing trend away from cable television toward direct content delivery via video-streaming and other new distribution methods. It's true that Disney has a lot of exposure to conditions in the cable industry, and a decline there will have an impact on its revenue from that source. Yet Disney has a track record of adapting successfully to changing conditions in the media industry, and investors can expect the House of Mouse to identify new opportunities and capitalize on them effectively.

Disney will have to chart a new course in order to thrive in the changing television landscape, but that's not a reason for pessimism. Twenty years from now, you should expect to see Disney remain a key player in the entertainment industry, and continuing to build up its business in ways that investors can hardly imagine right now.

Chugging along for many decades to come

For all the advances in technology and efficiency we have made over the years, railroads have remained the most cost effective way to move large amounts of goods over land by a wide margin. The last cost-comparison study done by the Bureau of Labor Statistics showed that the average revenue per ton-mile of rail is only one-fifth the cost of moving goods by truck, and there are few signs that truck transport is improving enough to overtake rail anytime soon.

That sets up rail companies as a good investment in general, and one that stands out as a better buy among them is Canadian National Railway. It's the only North American rail network that touches the East, West, and Gulf Coasts, giving it unmatched abilities to move goods and give options for its clients. It also is important to note that it has a much smaller exposure to coal than most other North American rail networks. This will be a  critical factor over a multidecade time horizon, as the coal industry is in a structural decline.

On top of all the advantages that Canadian National has going for it, management also does a commendable job of keeping costs low by running efficient operations. All of those factors are a large reason why the company has maintained one of the highest returns on equity in the rail industry for a decade now. 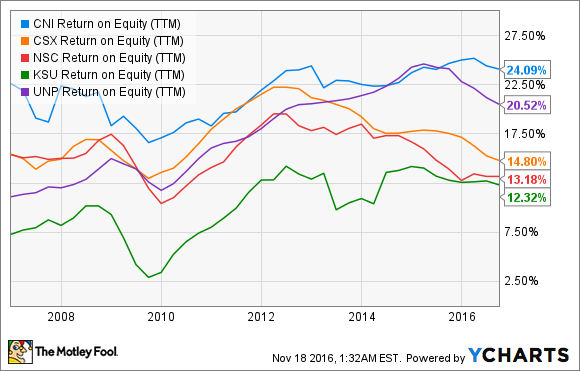 If you want an industry that has competitive advantages that will last for several decades, and a company within that industry that can deliver profits to you, then Canadian National Rail is the place to look.

A few years ago, it looked like Wal-Mart didn't have much of a strategy to combat the growing threat posed by Amazon.com. That didn't matter for a long time -- e-commerce sales still only account for just about 8% of total retail sales in the United States. But with online sales growing at a double-digit rate annually, Wal-Mart was eventually forced into action.

The company has taken major steps to make its stores more attractive to shoppers. Employees are receiving higher wages and more training, with the hope that this will lead to better customer service. So far, it appears to be working. Comparable-store sales in the U.S. have now increased for eight straight quarters, quite the feat in an environment where many other retailers are struggling.

On the e-commerce front, the retailer paid more than $3 billion for Jet.com earlier this year, and put Jet CEO Marc Lore in charge of its entire e-commerce operation. Online grocery ordering and pickup is a major initiative aimed at maintaining, or even growing, Wal-Mart's share of the grocery market. Its global e-commerce sales grew by 11.8% year over year during the second quarter, an acceleration compared to the first quarter.

Wal-Mart is making big changes and investments to ensure that it remains the king of retail. It will take time for all of this to play out, but it would a mistake to assume that it can't adapt and successfully compete against Amazon. Wal-Mart is doing what it needs to do in order to remain relevant for decades to come.

The critical link to investors

Every retail investor knows that their mailbox fills up with a small mountain of paperwork each year related to their portfolio. From proxy statements to prospectuses, there's an enormous amount of record keeping and tracking that goes on behind the scenes. Keeping on top of this boring but mission-critical work is a monumental task, which is why most companies turn to Broadridge Financial Solutions to help them remain compliant.

Broadridge was spun off of the data giant ADP in 2007,and it boasts a dominant 80% market share in investor communications in the U.S. With thousands of customers and a client retention rate of 98%, it is as clear as day that there is enormous demand for the services that Broadridge provides.

Looking ahead, a combination of cross-selling, new client wins, and smart acquisitions should allow Broadridge to steadily march its top-line higher. Better yet, since data processing and investor communication is a capital-light business, Broadridge throws off huge amounts of cash flow that it uses to reward shareholders.

Have a look at what has happened to the company's share count and dividend over the last five years to see what I mean: 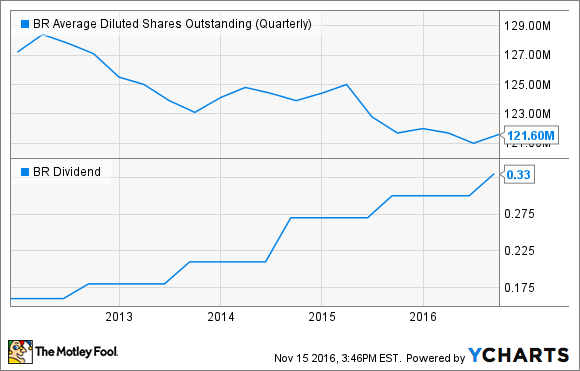 The need for investor communication and data processing isn't going away over the next 20 years, so I have high confidence that Broadridge will be able to produce steady growth from here. That's what makes this a great stock to buy and hold for the ultra long term.

The OLED transition is going to take a while

I've been a Universal Display shareholder on and off for years. Organic light-emitting diodes (OLED) are just so obviously the future of display technology, thanks to their fundamental benefits on power efficiency and the potential for truly innovative form factors. At times, it feels like industry is dragging its feet on the shift to OLED, and I've moved to the sidelines out of impatience on some of these occasions. The transition just feels like it's taking forever.

But that's kind of the point with long-term investing. If you can identify a long-term secular trend that you're confident will continue, then it pays to be patient. I recently bought back into Universal Display with the intention of really letting it ride for the long haul. The transition period could easily last 20 years as OLEDs start to penetrate even more markets, but they already have a strong presence in smartphones, and that's only going to increase: An OLED iPhone is expected to finally debut within the next year or two.

Universal Display sits at the center of the OLED technology web, licensing intellectual property and selling materials to manufacturers. Even though it's been around for years, the technology is still quite young in the marketplace, and its prospects are still highly volatile and dependent on many variables, so it'll be a wild ride for Universal Display shareholder in the years ahead.