Donald Trump is still two months away from assuming the presidency, but his victory earlier this month has already had a massive impact on the financial markets.

One major development is that interest rates have risen sharply. Many investors expect that Trump's plans to increase spending on infrastructure and the military while cutting taxes will drive faster GDP growth. That could stoke inflation, forcing the Federal Reserve to raise interest rates faster than previously expected. In the week after the election, U.S. 30-year mortgage rates and the 10-year Treasury rate both rose by about 0.4 percentage points.

That could be great news for Delta Air Lines (NYSE:DAL). Right now, the company's pension plan is dramatically underfunded. Higher interest rates will reduce its pension liability -- and ultimately free up more money for Delta to return to its shareholders.

Delta's pensions are underfunded by more than $10 billion. Image source: The Motley Fool.

Since the Great Recession, Delta Air Lines has put a great deal of effort into improving its balance sheet. Indeed, it has reduced its debt load by more than $10 billion over that period. This helped Delta win its first investment-grade credit rating earlier this year.

However, Delta's pension liability has actually increased over the past eight years, and is now significantly larger than its debt burden. As of the end of September, Delta's unfunded pension and other post-employment benefit liabilities totaled $12.6 billion. That's a massive amount of money relative to the company's market cap of about $35 billion. 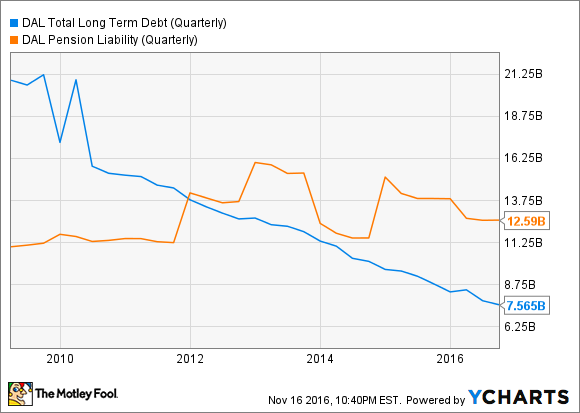 In Delta's 2015 annual report, the company estimated that a 0.5-percentage-point increase in its discount rate (the assumed interest rate for high-quality corporate bonds) would reduce its pension liability by about $1.2 billion. By contrast, a 0.5-percentage-point decrease in the discount rate would increase the pension liability by $1.3 billion.

During the first half of the year, the 10-year Treasury rate plunged from nearly 2.3% to a low of about 1.4%, before recovering to around 1.8% by early November. The rise in interest rates since the election has almost fully erased the decline from earlier this year. That's equivalent to reducing Delta's pension liability by about $1 billion. 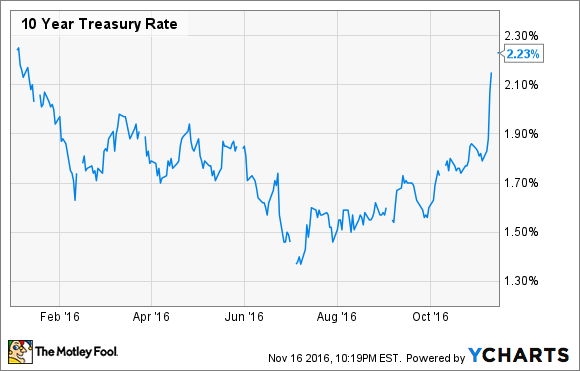 In other words, the more interest rates rise, the sooner Delta Air Lines will be able to stop devoting $1 billion annually to pension funding. That will free up more cash for shareholder-friendly dividends and buybacks in the years to come.