Open enrollment for Obamacare recently kicked off, and the cost of the premiums will feel like a punch in the gut to many Americans. On average, plans on the Affordable Care Act exchanges will cost a stunning 25% more than last year, and in some cases they will double. The increase won't just hit individuals and families hard; it's also bad news for investors in the majority of the nation's insurers.

Why? As premiums skyrocket, health insurance looks less worthwhile to healthy people, and high-utilization sick enrollees create dangerous financial losses for insurers. In fact, major insurers with heavy involvement in the ACA, such as Anthem (NYSE:ANTM), are taking it on the chin. Anthem reported a bottom-line decline of 10.3% year over year in its third quarter. That stemmed from a 9.4% rise in benefit expense, mostly due to ACA policies.

Meanwhile, Aetna (NYSE:AET) cited $430 million in losses in insurance products since Obamacare began, with CEO Mark Bertolini pointing out that the average price of ACA coverage is 10% to 15% below where it needs to be for insurers to break even, much less earn a dime.

With Trump victory, it's a whole new day for insurers

Adding to the turmoil, the new Trump administration will reshape the insurance marketplace. Some of Trump's proposed changes to the ACA, such as allowing competition across state lines, could further lower insurers' profits. But that's not the real problem. The big issue is this: As we all know, the market hates uncertainty, and the level of uncertainty just skyrocketed.

Insurers who have spent years and millions to sell policies through state exchanges have no idea what their marketplace will look like in coming years. Millions of people depend on the ACA for coverage, so actual changes will take time. But meanwhile, insurers heavily involved in ACA have a much more risky outlook, and the market will reprice them downward -- sooner or later -- to reflect that heightened risk.

Let's take a look at the firestorm now facing insurance stocks -- and why I believe UnitedHealth Group (NYSE:UNH), the insurer with the least exposure to ACA by far, is the only one to own.

In addition to potential major shifts in Obamacare, here's the mess that faces the nation's insurers. With rates and deductibles rocketing upward on ACA policies, fewer people see the plans as worthwhile. Consider this: The average American sees a physician only four times a year, with a retail cost of around $100 per visit, according to the National Center of Health Statistics. While plans vary greatly, a lower-cost ACA plan could now run $800 each month, and the individual will have to pay out of pocket for those doctor visits anyway, as deductibles can hit $10,000. If ACA coverage is subsidized, then the cost will be much lower -- perhaps only $800 per year -- but deductibles on lower-cost plans will still be sky-high. Meanwhile, subsidies also shift costs to taxpayers; the Congressional Budget Office estimates that this year's premium subsidies will reach $43 billion, or about $4,240 per subsidized enrollee.

Obamacare was supposed to work because the youngest, healthiest Americans would lower insurers' risk and thus lower the cost of coverage. But "even young people can do the math," Aetna's CEO said recently, claiming that this group spends on "gas for the car, beer on Fridays and Saturdays" over health insurance.

Fears of an imbalanced risk pool and high medical costs kept UnitedHealth a minor player in the ACA -- a decision that now looks prescient. No insurer has proportionally less exposure than the nation's biggest, with only about 795,000 ACA customers in total out of the 13 million plans sold in 2016. Those policies will soon decline further, with UnitedHealth shrinking ACA coverage to three states in 2017.

UnitedHealth's earnings blew it out of the park 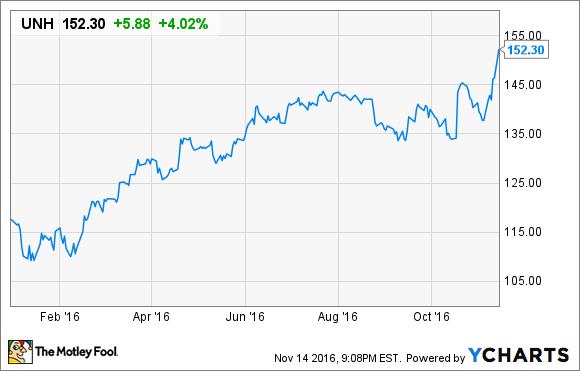 One major reason ACA premiums soared is that other insurers, such as Aetna and Humana (NYSE:HUM), are also in the process of reducing or eliminating ACA coverage in many states. But UnitedHealth is so far ahead of the game that it raised the possibility of stronger profit growth in 2017, something no other insurer can boast. UnitedHealth also upped guidance on full-year 2016 earnings to $8 per share in its Q3 earnings, versus a previous view of $7.80-$7.95 per share. In addition, the company's reported net profit rose to $1.97 billion, or $2.03 per share, from $1.6 billion, or $1.65 per share, a year earlier.

What about the dividend? UnitedHealth's payout is a modest 1.73%. But dividend growth counts more than current yield for many investors, and the dividend  has leapt 30% annually (on average) for the past five years and is easily supported by a payout ratio below 40%.

Meanwhile, worries keep piling up for other insurers

In addition to losses in their ACA segments, Anthem and Aetna face major merger issues. Last year, Anthem offered $54 billion to acquire Cigna (NYSE:CI), while Aetna offered $38 billion to take over Humana.  A brief euphoria drove shares of their acquisition targets to new heights, but those stocks dropped like stones when the Department of Justice filed suit to block the mergers. Currently, both Humana and Cigna trade well below their offer prices, meaning the market doesn't believe these deals will get done.

Interestingly, Aetna has been paying hardball, telling the DOJ it would probably be forced to withdraw from Obamacare altogether if the agency blocks its merger over antitrust concerns. We "believe it is very likely that we would need to leave the public exchange business entirely and plan for additional business efficiencies should our deal ultimately be blocked," CEO Mark Bertolini wrote in a July 5 letter.

Some have seen that as Aetna's payback to the Obama administration for blocking its merger. Aetna has now slashed its participation to just four states.

Lacking a crystal ball, there's no way to tell if Obamacare will be repealed, and many believe it won't be. That may be why the insurers have moved up almost in lockstep with the election -- it's hard for many to envision the U.S. without Obamacare, and the market is skeptical that the narrative has actually changed.

But that's ignoring the more immediate problem: the deteriorating risk pool and financial losses posed by the ACA. In addition, it's likely that fears about the ACA's survival will intensify as the Trump administration takes office, and if we start to see a slide, it could easily snowball.

Investors willing to ride out the volatility in the other insurers will probably be fine in the long term, but it I'd recommend that you at least temper your expectations. Meanwhile, UnitedHealth is the only insurer with the scale, the history, the diversification, and, most importantly, the lack of ACA sensitivity, to weather any storm that may come.