Two is a coincidence, and three is a pattern.

Shortly after Apple's (NASDAQ:AAPL) October Mac event, where it had been rumored that Apple would unveil a new display to replace the discontinued Thunderbolt display, the company confirmed to reporters that it was exiting the stand-alone display business. Instead, the company collaborated with LG Electronics to make a pair of 4K and 5K displays that could connect via USB-C to the new MacBook Pros.

Now we're seeing that Apple is giving up on wireless routers, too, according to a new Bloomberg report. Apple has reportedly dissolved its wireless router department, a slow process that has taken place over the past year. The company has reassigned those engineers to other product teams that are focused on products like the Apple TV. Apple currently sells three different wireless routers, but there are unlikely to be any new models in the pipeline; the last one was introduced three years ago in 2013. Apple is focusing on more financially important product categories and segments.

What links them together

If you look at displays and routers, you will notice a similarity, though: the underlying technology progresses very slowly. Display technology hasn't seen a game-changing innovation in years, and the shift to OLED displays has been incredibly slow for a wide range of reasons.

Wi-Fi technology also moves at a snail's pace; the current 802.11ac standard was introduced in 2013. Apple's Airport Extreme and Time Capsule use 802.11ac, while the smaller Airport Express is still stuck on the older 802.11n. The next major progression in Wi-Fi is 802.11ax, which isn't expected until 2019 or later. 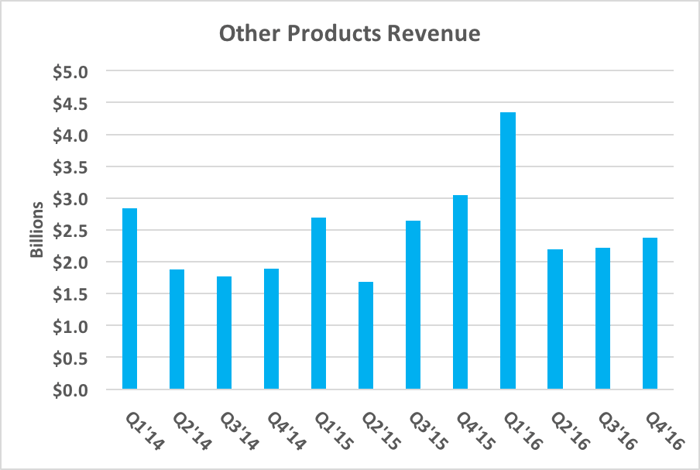 This combination of slow technological progress and low financial significance is a perfect recipe for Apple apathy. There's not a whole lot that Apple can contribute to pushing these categories forward, and it's not really worth the effort to try from a financial perspective. Strategically, having more products within the ecosystem benefits the platform, but the effects are marginal when you consider how expansive Apple's walled garden has become.

It's not a pattern

Displays and routers fall into Apple's "Other Products" segment, and the most interesting product within that segment is Apple Watch. Beyond Apple Watch, this has never been a particularly important category in terms of financial performance. It's more of a catch-all bucket for products that don't warrant dedicated disclosure, although I would argue that Apple Watch results should be disclosed since its performance has a lot more relevance to Apple's future as a nascent product category.

Beats and iPods are also included in other products, as is Apple TV. Having just bought Beats, Apple seems intent on expanding its headphone offerings. Apple is about to release its AirPods, which also feature an Apple-designed W1 chip. Apple wouldn't go to the trouble of designing the W1 if it wasn't serious about continuing with wireless headphones, particularly with the removal of the iPhone 7's headphone jack. The company is also making a big push into TV content, with a side of being strangely fascinated with original content.

Apple's approach to peripheral products is simply evolving. While Wi-Fi's slow progress doesn't mean that companies can't innovate (consider eero), the broader point is that Apple would rather focus its research and development efforts on the next big thing.