So far, 2016 has been one of those cliched roller-coaster years for McDonald's (NYSE:MCD). Despite posting five straight quarters of higher comparable-store sales, the fast-food chain's stock is up less than 4% year to date. The stock has been unable to reflect the seemingly stronger business as it bounced well off its yearly lows, but it also gave back some from its 52-week high.

Part of McDonald's problem is that it's still unable to attract more customers to its restaurants. The higher comps haven't been due to increased traffic coming through its doors, but rather from higher prices and product mix. Now it thinks it's identified the reason and could have a solution: table service.

The past 18 months have been one of transition for McDonald's. As it grappled with changing consumer demands, it reversed existing company policy and allowed its restaurants to serve breakfast at any time during the day. With around a 30% share of the daypart, breakfast was arguably one of the primary reasons people visited the chain, and customers had been clamoring for the option for years.

The response was almost immediate. McDonald's recorded its first increase in comps in years, and every quarter since then they've been higher than the year-ago period. But even with the change, customer traffic is down.

According to Bloomberg, 2016 could be the company's fourth straight year of lower customer counts, as they're coming in 0.1% lower through the third quarter, compared with being 3.1% lower last year. Company filings show guest counts for all of last year were down 3%, compared with a 4% decline in 2014, and they were off 1.6% the year before that. 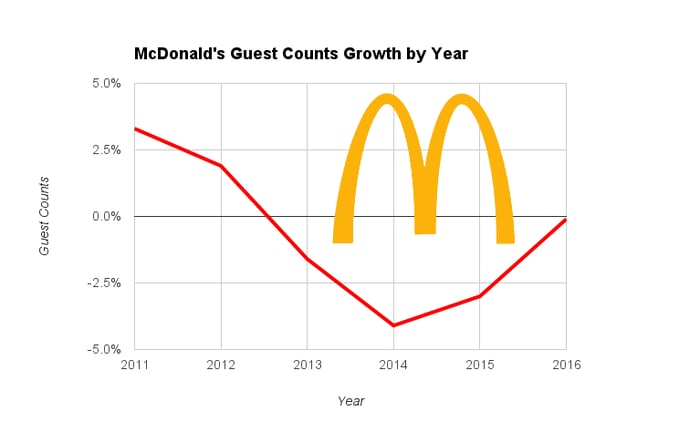 While the latest numbers would suggest McDonald's is heading in the right direction, the restaurant industry as a whole is experiencing a slowdown. Industry data from TDn2K found restaurant comps growth was down 0.9% in October, the eighth straight month of decline. Only February comps showed positive sales numbers, and that's because it had better weather compared to the year-ago month. Otherwise, all of 2016 would be down.

Picking up the pace

The one hope for McDonald's is that the quick-serve segment of the restaurant industry is one of the few that's actually been posting positive comps growth all year long (upscale and family dining is, too). Yet even that poses problems for the Golden Arches, because its numbers are still negative when the rest of the industry is growing.

McDonald's thinks its problem is that customers come to its restaurants, see long lines at the order counter, and choose to go somewhere else. To combat that image, it wants to introduce table service to all 14,000 restaurants in the United States.

The fast-food chain has table service at some 500 restaurants currently, but it will be rolling it out nationwide next year. While it will be hiring more people to bring customers their food, it also plans on adding mobile ordering, more order kiosks, and digital payment options, too.

Not your typical greasy spoon

There are several problems with the plan. First, CEO Steve Easterbrook is still chasing millennials who have abandoned fast food for fast-casual chains. The table service is intended to enhance the experience of dining at McDonald's, but people going to quick-serve chains aren't looking for white-glove service; they want good food, served fast, and cheaply priced.

While moving people away from the counter will make it seem its restaurants are more open and wait times shorter, it will be adding significant costs to its operations from all the new people it will be hiring.

That's certainly a positive development, but McDonald's has already increased its costs by raising worker pay, and presumably McDonald's won't be paying these new employees a sub-minimum wage -- as occurs in the rest of the restaurant industry, where waiters and waitresses also earn tips. (Incidentally, restaurants that have eliminated tipping have found it largely a failure, both from customers who want to reward service, but also among the wait staff themselves.) So McDonald's will be introducing a higher-cost model than exists at the competition, but for food that's relatively inferior to traditional restaurants.

Fire up the barbie

The problem facing the industry is that the gap between the cost of eating out and dining at home is widening. Food-price deflation has hit grocery stores nationwide, yet as noted earlier, McDonald's and others are subsisting on higher prices or a product mix that tilts toward higher-cost items. Traffic is still falling.

The fast-food chain would do better focusing on the value it offers to customers, one of the best advantages it has, rather than creating a false, more upscale image of its restaurants. Just as it sought to improve the speed and accuracy of its drive-through window with policies such as ask-ask-tell, it would do well to set its priorities on keeping the orders moving from the kitchen to the customer quickly. It doesn't need a layer of waiters and waitresses to do that.