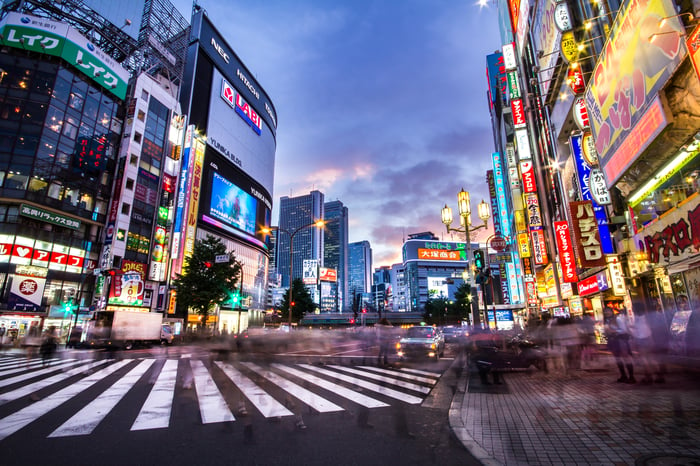 Tokyo is poised to become one of the world's largest gambling centers if legislation being considered there is approved. Image source: Getty Images.

Casinos look like they may be on the rebound in both Las Vegas and Macau, but you can forget those two gambling meccas. The smart money seems to be betting gambling will be big in a completely different place: Japan.

Just as on mainland China, gambling is illegal throughout Japan, but whereas China carved out the tiny enclave of Macau to permit gaming to flourish, Japan is seeking to permit it countrywide.

The move got a big push this summer when the ruling Liberal Democratic Party of President Shinzo Abe won a clear majority in the National Diet, the Japanese bicameral legislature. Where previously it had to form coalitions with the Buddhist Komeito party, which opposes gambling, the July elections gave the LDP the upper hand without need for coalition-building.

Hope for gambling legalization was further spurred in August after Abe promoted three pro-casino officials to senior posts in the party.

Yet whether legalization will win the day on the first go-round is anyone's guess. The current session of the legislature only runs through the end of the month, and though it could be extended for several weeks, it may not be enough time for a bill to make it through both houses. Yet the likelihood gambling comes to Japan -- if not now, then very soon -- is so great that casino operators are abandoning plans for expanding elsewhere and preparing for the day when it is legal.

Sun rising on gambling in Japan

Genting Singapore, a Singapore-based integrated resorts development specialist, announced it was selling its stake in its South Korean Resorts World Jeju casino in favor of pursuing new investments in Japan. Bloomberry Resorts is doing the same thing, selling out of South Korean ventures in favor of new ones in Japan.

They're not alone, either, in seeing Japan as the next major hub for global casino operators. MGM Resorts (NYSE:MGM) CEO James Murren says he is willing to spend as much as $9.5 billion through his recently created real estate investment trust MGM Growth Properties on new casinos there, echoing a price tag Las Vegas Sands (NYSE:LVS) has previously said it also could spend on developing integrated resorts there. Macau-based Melco Crown Entertainment (NASDAQ: MPEL) has said it would spend up to $5 billion on a Japanese casino.

Although Wynn Resorts (NASDAQ:WYNN) has yet to say how much, if anything, it would pay to build a resort in Japan, it also likely wants to place bets there as it represents a new, potentially huge, new market.

The biggest bet around

Analysts have pegged the Japanese casino market opportunity to be as large as $40 billion a year, which would make it nearly 40% larger than Macau, which took in less than $29 billion in 2015. While that figure comes as a result of a better than two-year decline in gaming revenue, a result of a Chinese government crackdown and luxury gift giving (as well as trying to control over money flowing out of China), Macau's gaming revenue only peaked at $45 billion in 2013. That indicates Japan legalizing gambling could ensure the enclave never reaches those heights again. In contrast, gambling revenue in Las Vegas last year totaled just under $10 billion last year.

Japan's Integrated Resorts Promotion Bill, as the legalization legislation is called, is important for another reason. Tokyo is set to host the 2020 Summer Olympics, typically a bloated, money-losing affair for the cities that host them. By increasing the city's appeal as a tourist destination prior to the games, it could blunt if not reverse the decline often associated with them.

With U.S. and other global casino companies lining up to bet big on Japan, now would be the right time for the country's legislature to pass the bill legalizing gambling in the country. But whether it's before the end of this year, or sometime next year, it seems that it's an idea whose time has come to Japan.