Warren Buffet likes to keep Berkshire Hathaway's balance sheet packed with cash so he can dive in and make a game-changing acquisition at any time. As of the third quarter, the conglomerate's cash balance exceeded $68 billion. So what companies could be on Buffett's radar right now?

While that's an impossible question to answer, we do know what criteria Buffett uses to judge acquisition candidates. In fact, he clearly spells out his criteria in the company's annual letter to shareholders:

While we can't know what kind of offering price Buffett might receive if he were looking to buy an entire company outright, we can use his first five criteria to determine if a stock could potentially be on his radar. Knowing that, let's run CVS Health (NYSE:CVS) through the first five items on Buffett's checklist to see how the company stacks up.

CVS health has no problems clearing this first hurdle, which is important to Buffett because he generally only wants to invest in established, profitable companies. With more than 9,600 retail stores and one of the largest pharmacy benefits management (PBM) businesses in the country, CVS rings up more than $150 billion in annual sales. That allowed it to produce more than $8.6 billion in pre-tax earnings in 2015.

No one chooses when to get sick, so demand for prescription drugs tends to remain strong regardless of what's happening in the economy. That fact has helped CVS Health's revenue and profits to consistently march higher over the years, with no sign of stopping: 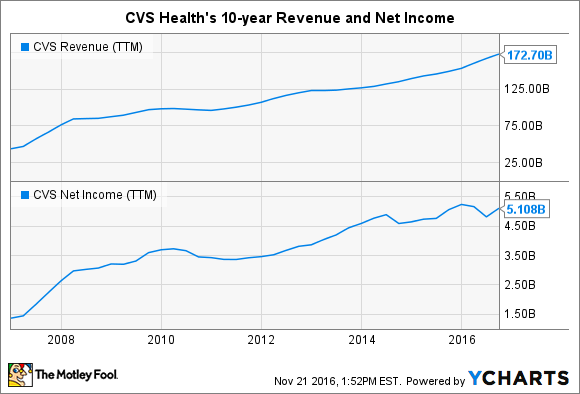 Buffett loves to own businesses that generate strong returns on capital without the need to load up their balance sheet with debt. Here's what CVS Health's numbers have looked like over the past 10 years: 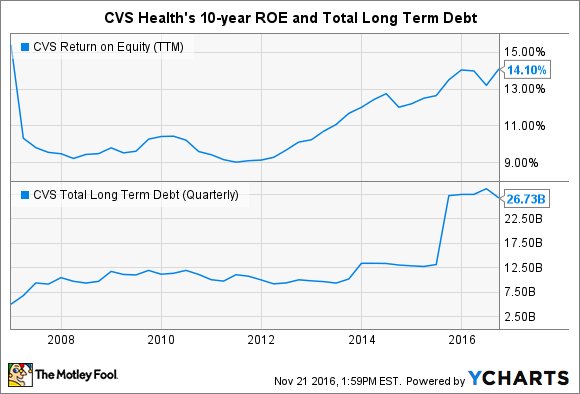 While CVS Health's return on equity has steadily marched higher over time, the company's long-term debt of $26 billion would probably give him pause. While that huge figure was largely a result of last year's $12.9 billion acquisition of Omnicare, and the company can easily afford the interest payments, my hunch is that Buffett wouldn't be thrilled with the leverage.

CVS Health's current CEO, Larry Merlo, has been with the company for decades and took over the top chair in March 2011. Not only did Merlo spearhead the acquisitions of Omnicare and Target's pharmacy business, but he also made the bold decision in 2014 to eliminate tobacco sales from its stores. Shareholders who bought when he took over have seen the company's shares more than double in value, which is a return that blows past that of the S&P 500. 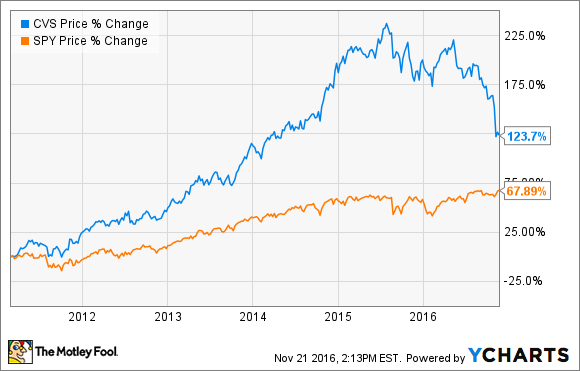 In addition, there's a strong bench of executives right behind Merlo that have decades of retail and pharmacy experience. All told, shareholders appear to be good hands.

The majority of CVS Health's revenue comes from its PBM division. This business is a middleman between providers of healthcare coverage -- companies, governments, unions -- and drug companies. CVS collects a modest fee for using its massive bargaining power to negotiate discounts on drugs and then passes along the savings to customers.

On the retail side, CVS Health boasts a nationwide chain of more than 9,600 stores. Customers use the stores to pick up prescriptions, buy convenience items, or see a healthcare provider for a minor medical problem at one of its 1,100 in-store MinuteClinics.  With 10,000 baby boomers retiring each day, it's easy to understand that the long-term demand for these businesses continues to look bright.

In total, CVS Health scores a four out of a possible five on Buffett's checklist, which is an encouraging number. However, since Buffett would have to commit tens of billions of dollars to buy the company outright -- CVS Health's market cap is $78 billion right now -- my hunch is that this company is too big for Buffett to consider swallowing whole.

That's especially true when you consider that the company's primary competitor, Walgreen Boots Alliance, is starting to get aggressive. In addition to its pending takeover of Rite Aid, Walgreens has also been cutting deals on the PBM side that threaten CVS Health's long-term growth. Those moves are expected to put a dent in CVS Health's profits 2016, which has caused shares to fall drastically over the past few months.

However, management still believes that CVS Health will be able to grow its profits in excess of 10% over the long-term. Thus, even if Buffett might not be interested in buying CVS Health today, I believe this is still a great business for retail investors to consider owning for the long term.