On Nov. 21, MACOM (NASDAQ:MTSI), which bills itself as a "leading supplier of high-performance analog RF, microwave, millimeterwave and photonic semiconductor products," announced that it had just agreed to buy fellow chipmaker Applied Micro (NASDAQ: AMCC) for $8.36 per share ($3.25 in cash and 0.1089 MACOM shares in exchange for each share of Applied Micro). The stock closed Nov. 18 at $7.25.

MACOM also made it clear that it intends to get rid of Applied Micro's Compute business rather quickly. "MACOM intends to divest AppliedMicro's well-positioned Compute business within 100 days from closing the transaction, as the business does not strategically align with MACOM's long-term focus," the press release said. The deal is expected to close in the first three months of 2017.

Applied Micro's highly touted X-Gene server processor efforts appear to be a bust. Let's take a closer look at why.

Why sell before the revenue starts flowing in?

I would ignore the rosy commentary around Applied Micro's X-Gene business in the press release announcing this transaction. Remember, MACOM is trying to sell X-Gene and it wants to complete that sale quickly, so it's only natural to expect that the press release would be positive on those efforts.

Actions speak louder than words, though.

If Applied Micro were truly on the verge of releasing competitive server processors, then why would Applied Micro's management and board of directors agree to sell out just before what could be a significant increase in both revenue and profitability?

Indeed, Applied Micro is selling out for $8.36 per share, but investors might recall that on the back of the hype around X-Gene's prospects, the company's stock topped $14 per share in late 2013. 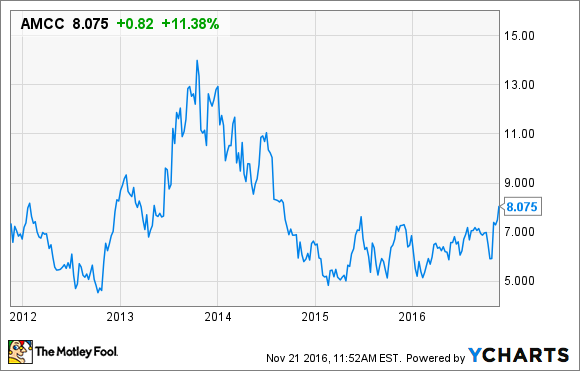 Wouldn't it have been in the best interests of Applied Micro's shareholders for the company to stay public so that when the revenue and profit dollars from future X-Gene products start rolling in, the stock would move significantly upward?

It certainly would have, and the fact that Applied Micro is selling now suggests that management and/or the board of directors didn't have much confidence in X-Gene's future.

Although this move seems to indicate that X-Gene is a disappointment, the companies say that Applied Micro "has been exploring strategic options for the Compute business and there is known strategic interest among several potential buyers and investors."

The good news for MACOM is that it will almost certainly be able to unload Applied Micro's Compute business. It will be interesting to see what it ultimately ends up going for, but considering that last quarter just $11.6 million of Applied Micro's $41.8 million in revenue came from sales of computing products, I don't think it'll go for much.