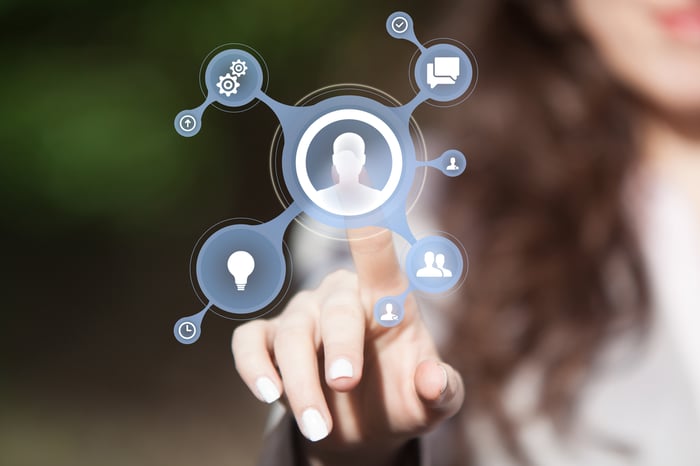 When you have a product with high switching costs, market-share wins tend to stay with you for quite some time. As Wall Street is only now coming to fully appreciate, Veeva Systems (NYSE:VEEV) has been changing the landscape in its industry over the past five years, and because of its high switching costs, it is building an ever-wider moat around its business.

Founded in 2007 by former salesforce.com executive Peter Gassner, the company focuses almost entirely on meeting the cloud-based needs of the pharmaceutical industry. While at salesforce.com, Gassner realized that the drug industry had very specific needs that weren't being met. At the time, that meant solutions had to be formulated in-house. Gassner sought to change that at Veeva, first starting with a customer service solution (Veeva CMS), and then moving toward regulatory and drug-trial platforms (Veeva Vault).

As the results from this quarter -- and past ones -- show, the company's offerings continue to multiply and win over customers. Here's what we learned from this week's third-quarter report.

Across the board these were very positive numbers, coming in ahead of what analysts -- and the company itself -- had forecast.

The main reason for the jump in earnings, relative to sales, was increased leverage from the network that Veeva has already built out. Such is the nature of software-as-a-service (SaaS) companies: You invest a lot of money up front to make sure you have the very best platform possible. Then, maintenance costs become much lower, and each additional client adds more and more directly to the bottom line.

As evidence of this, during the same quarter last year, gross margins came in at 65.38%. During the most recent quarter, the metric expanded by a whopping 386 basis points, to 69.24%. Additionally, while operating expenses jumped 31%, the change was still eclipsed by sales growth.

Leverage: Yes. Resting on laurels: No

It would be easy to assume that Veeva might be pulling back on its growth initiatives, given the acceleration of earnings growth. But that's simply not the case.

At this point, the company has released so many add-ons to its primary Veeva CMS, Veeva Vault, Veeva Network, and Veeva OpenData products that they can be difficult to keep track of. During the past quarter, the company said it would offer Veeva Electronic Data Capture and Veeva Vault eSource starting in 2017 to further strengthen its clinical operations and data management solutions.

In the most basic of terms, this is a single-source platform that allows drug companies to keep track of all the information they need in bringing a drug from the idea stage, through clinical trials, and all the way to market. The seamlessness of the entire package and the value of having all that data in one place are what makes the product so exciting for drug companies.

But perhaps most importantly, each of the company's further offerings is gaining traction. When the company went public, Veeva CMS accounted for the lion's share of sales. But as Gassner pointed out in the company's conference call, another product contributed a significant amount of business in the third quarter:

In Q3, for the first time, Vault bookings accounted for a little more than half of total bookings in the quarter. This is another exciting milestone for Vault and an indication of the significant opportunity ahead. We also continue to make great progress in our early work to take Vault outside of life sciences.

This is important for two reasons. First, it means that Vault has already eclipsed CMS, and isn't showing any signs of slowing down. But perhaps more important to its long-term prospects, Vault has been so successful that companies outside of the pharmaceutical industry want to use it, which could represent a huge opportunity over time.

For the fourth quarter, management said that investors could expect sales of roughly $146 million and non-GAAP earnings per share of $0.17. For perspective, these figures would represent growth of 28% and 13%, respectively. What I would pay more attention to is growth in free cash flow, as it takes a while for new subscription revenue to flow to the bottom line of earnings -- but it shows up earlier with cash flow.

All in all, this was a very solid quarter for the company; it's no surprise that the market has reacted by bidding up shares by as much as 9% following the release.