Buying dividend stocks can be a great way for long-term investors to build wealth over time. Provided, of course, if they pick solid companies and not just buy it because it has a dividend.

There are plenty of dividend-paying stocks with abysmal track records this year, but few have had as poor a year as CPI Card Group (NASDAQ:PMTS), GNC Holdings (NYSE:GNC), Computer Programs & Systems, Inc. (NASDAQ:CPSI), Abercrombie & Fitch (NYSE:ANF), or Ensco plc (OTC:VAL). These five stocks are five of the worst-performing dividend stocks of the year that haven't ventured into the very high-yield category (more than 6%).

Let's take a quick look at all of these companies to see what went wrong in 2016 and whether any of these stocks are worth a deeper examination.

This is a smorgasbord of companies, but all of them saw significant drops this year from one or more of these three things: missed earnings expectations, lowered guidance, or dividend cuts that resulted in spectacular drops in single trading sessions. 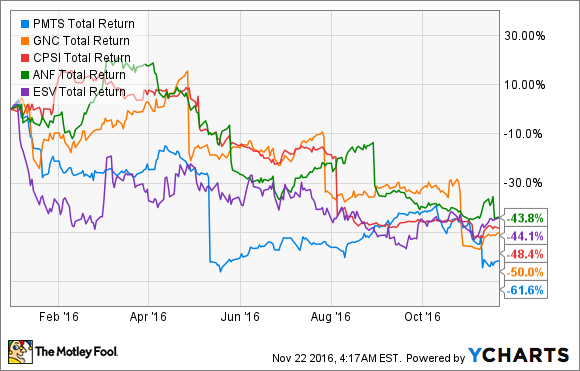 For CPI Card Holdings, the big issue came in May, when the company announced that it was slashing guidance for the fiscal year. The embedded-chip manufacturer said that many of the smaller institutions and card companies have been slower to adopt the more advanced cards, while larger institutions ordered too many in 2015 and were over stocked.

As a result, it lowered earnings-per-share (EPS) guidance by more than 40%. Even after that announcement, though, the company recently announced third-quarter earnings that also missed analyst expectations. The company predicts that 2017 will be better as adoption of embedded chip cards continues to increase and service revenue for its new technologies expands. That being said, the adoption rate of these cards has been much slower than investors anticipated, and as a result, they are pricing their expectations accordingly.

GNC Holdings's issues just seem to worsen with each passing quarter. Not only have same-store sales slumped in each of the past three quarters, but those declines are accelerating:

If this news weren't bad enough, other news during its second quarter compounded these problems. During that quarter, the company suspended its share repurchase program, scrapped its full-year guidance figures, and CEO Mike Archbold resigned. That is a bad-news trifecta that would be difficult for any company to overcome.

Surprise, surprise! An acquisition that hasn't panned out

Investors were initially excited about the acquisition that healthcare specialist Computer Programs & Systems made at the beginning of the year. The $250 million acquisition of Healthland further entrenched the company's position as a healthcare IT provider for small and mid-sized hospitals and other care facilities.

The one unfortunate drawback from this acquisition was that it basically stripped the company of any cash on hand and also led to the issuance of $149 million in debt. In doing so, it was betting that the purchase of Healthland would go swimmingly. It hasn't turned out that way.

As a result, the company's second quarter's earnings slipped 66% as it has struggled with bringing down integration costs. This rapid decline has also forced the company to change its dividend policy such that instead of a foxed rate dividend, it will pay out 70% of its non-GAAP earnings. Hopefully, this will free up enough cash to restore its balance sheet integrity, but so far it hasn't been a smooth transition.

Another victim of bad comps

Like GNC Holdings, Abercrombie & Fitch has been struggling with same-store sales all year. When it announced its first-quarter earnings, it revealed that comps across the company were down 4%. This was even more pronounced at its Abercrombie & Fitch stores, though, as its Hollister brand kept comps flat. At the same time, it issued tepid guidance for the entire year that hardly encouraged investors to stick around.

Things got even worse when it announced third-quarter earnings, however, as comps were down 6% across the board and down 14% at its Abercrombie & Fitch stores. On top of that, the company expects negative same-store sales results during the holiday season. Retail can be a fickle business, and based on these results, the company is losing touch with its core clientele. If that is the case, then investors shouldn't expect a turnaround anytime soon.

Can we call it a dividend stock anymore?

The offshore oil rig market has been brutal for two years now as declining oil prices has led producers to cut spending and shelve exploration and development projects. As a result, Ensco and many others have watched as contracted work withers away and revenue dries up. Facing such tough industry headwinds, Ensco has been forced to conserve as much capital as possible. So during the company's year-end results in February, the company announced it was slashing its dividend to a token amount of just $0.01 per share.

There is no doubt that stocks for Ensco and the lot of offshore oil rig companies are trading at dirt-cheap valuations right now, and for cyclical businesses like this, it can make for opportune buying times. Based on statements from exploration and production companies, though, there is isn't much reason to think business is going to pick back up in the near future, and these companies could all go through a lot more pain that few investors may want to stick around for.

For value investors who like to buy stocks on the cheap, there aren't a whole lot of great buys from this group. GNC Holdings and Abercrombie & Fitch have some major soul searching to do to bring their customers back in the door. Computer Programs & Systems has some internal cost demons that need to be exorcised, and the broader market for offshore rigs doesn't many reasons to be bullish on the outlook for Ensco. Perhaps the one company that may be worth a look is CPI Card Holdings as it sees better times coming thanks to improved adoption and higher service revenue. Still, there are even reasons to think that things may not go swimmingly for the company, and investors may want to take a sit-and-wait approach to all these stocks.