American fashion company Coach (NYSE:TPR) continues to execute on its transformation and rebound efforts, but to mixed results. The stock appeared to be on the mend over the summer, but it started to drop in August on renewed investor angst. Here's the latest on the company's efforts.

The Coach strategy for a new world

Coach has been working to restore sales and profits that have dropped since peaking a few years ago. At the heart of the fashion company's efforts is a style transformation fueled primarily by the overhaul of its product lines. The company has been updating the look of its leather goods, hiring a new creative director three years ago to do just that, while also expanding from a "specialty retailer" focused on women's handbags to a "house of fashion" featuring accessories and clothing for both men and women. 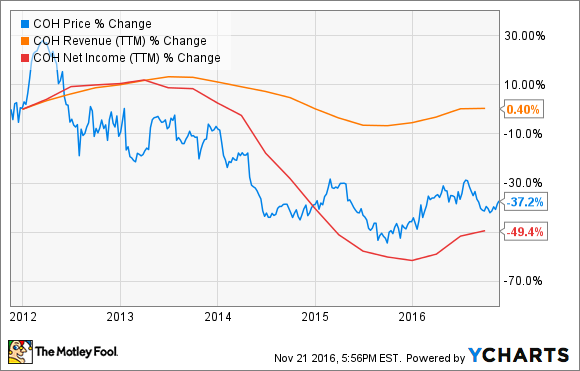 In line with this effort, Coach completed the purchase of luxury shoe designer Stuart Weitzman in the spring of 2015. Though the acquisition is still fresh, it has already given a boost to the top and bottom lines.

The company has also been upgrading its sales platform. Coach has been highly dependent on department-store distribution in times past, especially by way of the ladies' handbags department. With bricks-and-mortar general merchandise stores struggling in the past few years, the Coach style has been consolidating to global Coach-only stores, featuring new layouts and interior aesthetics highlighting the new products, as well as an increased emphasis on online direct sales. A new targeted marketing campaign was launched this year, themed with the new store and website layouts.

A final area of focus has been decreasing costs. Coach has been closing underperforming stores, decreasing distribution and selling costs, and announced a 10% cut in corporate staff earlier in the year.

The market has thus far been unimpressed by Coach's attempt at remaking itself. Sales and profits have begun to improve, but it hasn't been a slam-dunk success. Take the last reported quarter as an example, which covered the three months ending Oct. 1. Total net sales were up a mere 0.7% during the quarter. This included a 3% decrease in sales in North America while department-store sales fell 30%, offset by a 2% increase in comparable sales at Coach stores. Online sales dragged the comps figure down as the company continues to cut back on its digital sales events. International sales increased 7%, led by double-digit increases in Japan and Europe. China sales were flat with the year-ago period. Stuart Weitzman shoe sales climbed 1% year over year.

It was a blase three months by the numbers, but when considering the company's pullback from department stores and a re-emphasis on high-end fashion by cutting out discounting, it's hard to complain too much. As a result of the redirected efforts and ongoing cost-cutting, profits increased 20% to $0.42 per share.

After the shares initially dropped over 3% on the earnings release, investors apparently decided the report wasn't all that bad and the shares have begun to rally again.

The Coach makeover will be a longer-term story. Though sales seemed to sputter last quarter, it's important to remember much of that is due to the company's pulling back from department stores.

Management reiterated its guidance for the coming year, expecting sales to grow in the low to mid-single digits. Despite the modest outlook on the top line, management sees profitability maintaining its recent pace and growing double digits in the year ahead. With the results of the company's reboot still developing and the bottom line on the rise, Coach stock still looks like a good bet, even though the market has thus far been unimpressed.