In line with the rest of the industrial sector, the stock prices of FedEx Corp. (NYSE:FDX) and United Parcel Service (NYSE:UPS) received a boost following Donald Trump's election win. However, both shipping companies rely on global trade for a large part of their earnings, and a Trump presidency could pose an existential threat to that segment of their revenue streams. Should investors in the couriers be worried?

There is little doubt that both delivery services favor trade growth. FedEx CEO Fred Smith has warned of the dangers of protectionism, supports the idea of new U.S. trade treaties, and has talked up the potential for the Trans-Pacific Partnership (TPP) and Transatlantic Trade and Investment Partnership (TTIP) to promote economic growth.

In a similar vein, UPS CEO David Abney has pointed out that "following ratification of trade deals, we have seen about a 20% increase in U.S. exports to the countries involved," and encouraged Congress to pass the TPP legislation, saying "Trade legislation to accelerate economic expansion like the Trans-Pacific Partnership is vital to the health of the U.S. economy."

Both CEOs are mindful that since the last recession, global trade growth has not generally outpaced GDP growth in the manner it usually did prior to 2008.

So what's to be made of Trump's election promises, and how will it impact these companies' bottom lines?

A few bullet points from the "7 Point Plan" on the president-elect's official website:

Given the potential for trade disruptions based on these actions, or even in light of the intent to take them, is a negative outlook on UPS and FedEx warranted?

Three reasons to be cheerful

It's very difficult to know how political matters will pan out, or precisely what their effects will be. That said, there are three key reasons that UPS and FedEx shareholders shouldn't be unduly worried by a Trump presidency.

The following charts show that FedEx's operating income is now more closely balanced between its ground segment and its express segment -- 44% of its express revenue comes from international operations -- than it was a decade ago. In five of the past six years, ground outearned express. 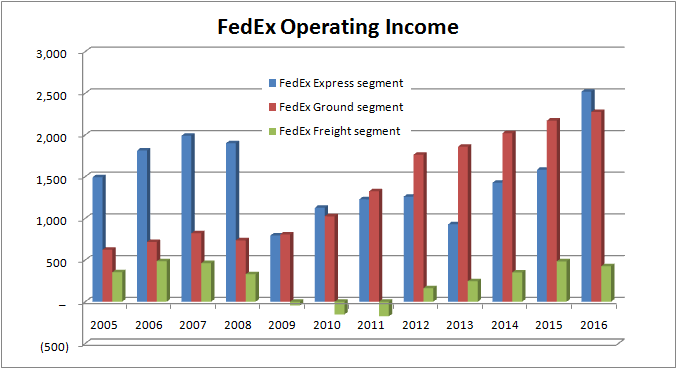 It's a similar story with UPS. As you can see below, in recent years, the share of its total revenue derived from its U.S. domestic package business has grown. 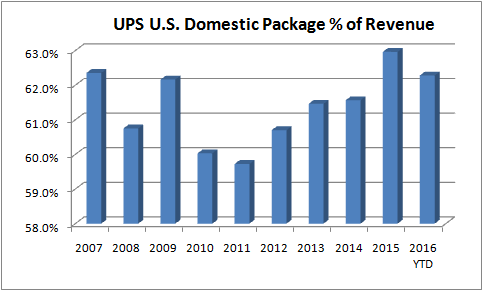 One of the reasons for this trend is the growing importance of e-commerce trade in the U.S. FedEx and UPS are simply not as reliant on international trade as they used to be.

As mentioned above, Trump's stated aim is not to scupper international trade, but rather to renegotiate trade deals so that they are more favorable to the U.S. Given that the U.S. is the most powerful country on Earth, and countries like China and Mexico are economically geared to export to the U.S., it's not hard to see that Washington has significant leverage. In other words, Trump has a strong hand to play. China, for example, is in no hurry to stop trading with the U.S.

Moreover, if China is forced to stimulate domestic demand -- in response to a drop in exports -- then global growth could receive a boost, which would be good news for domestic exporters, and thus for UPS and FedEx.

Finally, if Trump's policies result in a relative shift in industrial production and manufacturing toward the U.S. industrial heartland, then the package shippers are both likely to receive a boost from B2B delivery growth.

In fact, B2B has suffered this year as U.S. industrial production has declined. For example, in UPS' second-quarter earnings release, management outlined how "strong business-to-consumer (B2C) growth trends continued this quarter, outpacing business delivery growth more than five to one." Both companies could benefit from stronger domestic manufacturing output.

All told, UPS and FedEx investors should not unduly fear a Trump presidency. Obviously, if his policies cause trade wars to erupt, these companies could have issues, but then again his stated aim is to redress an imbalanced trade relationship with countries like China and Mexico, rather than abolish it. If he succeeds, he could actually create more favorable conditions for package delivery companies.