There's been a surprising group of winners in the days since Donald Trump won the election.

While much of the market has gained since then, newspaper stocks including The New York Times Company (NYSE:NYT), Gannett (NYSE:GCI), McClatchy (NYSEMKT:MNI) and Tribune Media (NYSE: TRCO) have all surged since Trump was voted in.

All four stocks have jumped by double digits in the past two weeks: 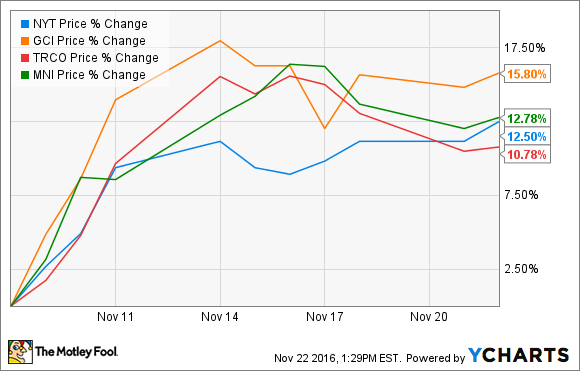 The result may seem bizarre. After all, the president-elect has consistently trashed the "mainstream media" and feuded with institutions like The New York Times and Washington Post, calling such papers biased and unfair. Trump has gone as far to threaten such media outlets, promising "problems" for Post owner and Amazon.com Founder Jeff Bezos, and saying he would open up libel laws to sue journalists.

While such a president would appear to be a problem for newspapers, the reading public has responded with an outcry of support for these so-called papers of record. Many newspapers have seen subscriptions surge since the election. The Times reported that subscriptions had jumped by four times in the week following in the election, revealing the news by way of a characteristic spat with the president-elect.

The Times also said it gained 41,000 new subscribers in the week following the election and saw record visits to its website from Nov. 8 to Nov. 10.

Even before the election, Trump had been his own unique gift to the media, attracting so much attention that businesses from restaurants to the NFL blamed the election for taking away their customers and viewers.

October, in fact, was a record month for The Washington Post, which saw nearly 100 million visitors to its website.

There seem to be two different causes fueling the newspaper stocks' recent rise. One is that the story of Donald Trump, whose rise has been the most compelling story of the year, will continue into a chapter unforeseen by most, and should continue to draw eyeballs. For decades, Trump has had a knack and a desire for attracting a media circus, and he's a soundbite machine like no other. His antics and willingness to say what's on his mind should continue to give newspapers a compelling storyline.

But another reason is the media's status as the fourth estate, or the so-called fourth branch of government, providing checks on the presidency, Congress, and the Supreme Court. Many of Trump's detractors fear potentially catastrophic consequences from his presidency, and in the wake of Facebook's (NASDAQ:FB) fake-news scandal, the need for professional, factual journalism has also become vividly clear to millions of Americans. Ironically, Trump's ascendance could also bring about a renaissance for traditional newspapers, which have seen their businesses crumble since the advent of the internet brought on a deluge of free media.

Commentators such as John Oliver have called on Americans to "support actual journalism" by subscribing to newspapers and donating to non-profit organizations such as ProPublica, which has also seen a surge in donations since the election.

The two factors that have contributed to newspaper stocks' recent rise -- Trump's unconventionality and the need to hold him to account -- are unlikely to change over the next four years, meaning these companies could see a meaningful increase in profits because of a Trump administration. While the impact of the recent subscriber surge won't be clear until the next round of earnings reports in February, a moderate boost in subscribership can have an outsize impact on the bottom line. An increase in circulation could shore up much-need advertising sales, stabilizing a model that's long been in decline.