What makes a stock a good fit for a retirement portfolio? Most older investors want steady dividend payments for income, but don't want to give up the potential for growth. These three pharmaceutical stocks should be able to deliver both. Here's why Bristol-Myers Squibb (NYSE:BMY), AbbVie (NYSE:ABBV), and Lilly (NYSE:LLY) could offer the right investment prescription for you.

Bristol-Myers Squibb easily checks off the dividend requirement. Its yield stands at a respectable 2.68%. Bristol has also claimed one of the best Big Pharma dividends over the last two decades.

The real attraction for Bristol now, though, comes from its growth potential. Wall Street analysts project the drugmaker will grow annual earnings by 17.8% on average over the next five years. These rosy forecasts stem largely from expected success for one drug: Opdivo. 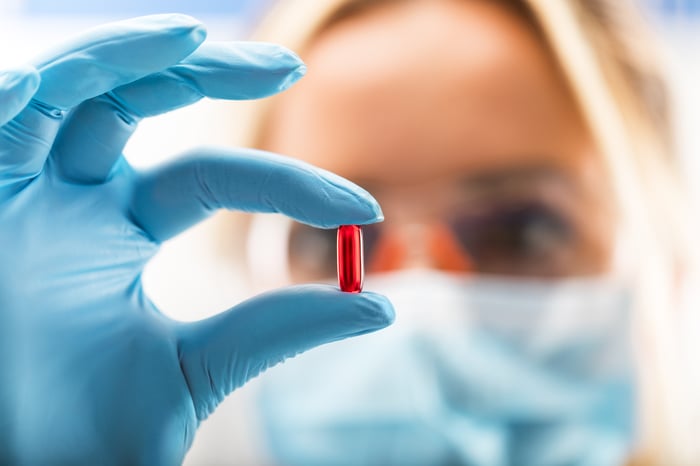 During the first nine months of 2016, Opdivo generated sales of $2.46 billion. That's nearly double the sales racked up in the prior year period. However, not all the news for the cancer drug has been great. Bristol announced disappointing results from a late-stage study using it as a first-line treatment for non-small cell lung cancer (NSCLC).

Despite this clinical setback, the company still has high expectations for Opdivo and plans to explore more possibilities in combination with other drugs. While much of Bristol's growth depends on the cancer treatment, the drugmaker also continues to see strong sales growth for blood thinner Eliquis. And, the brightest near-term prospect in Bristol's pipeline, prostate cancer vaccine Prostvac, could generate peak annual sales of $1.3 billion if approved.

Humming along with Humira

If you like Bristol-Myers Squibb's dividend yield, you'll love AbbVie's current yield of just over 4%. The company has been able to pay out such nice dividends thanks in large part to Humira, which ranked as the world's top-selling drug in 2015. The immunosuppressant, which is used to treat a range of conditions including arthritis, plaque psoriasis and Crohn's disease, seems likely to retain its top spot this year.

Wall Street analysts think that AbbVie will achieve average annual earnings growth of almost 15% over the next five years. Continued strength for Humira will be an important factor for the company to hit this goal, but the company  has another solid growth driver with cancer drug Imbruvica.

Expect Imbruvica to become even more key to AbbVie's fortunes over the next few years. The drug could reach peak annual sales of more than $6 billion. While that's well below the $14 billion that Humira generated last year, it's still impressive.

AbbVie should also get help from its pipeline. One standout potential candidate is elagolix. The company expects to submit the experimental drug for FDA approval as a treatment for endometriosis next year. Elagolix is also in a late-stage study targeting treatment of uterine fibroids.

Lilly's current dividend yield of 2.66% might seem low compared to its previous levels. However, that negative comparison to the past is mainly a reflection of how well Lilly's stock has performed over the last several years.

Analysts think Lilly will experience solid annual earnings growth of over 11% over the next five years. To do so, the drugmaker will have to overcome several hurdles, including loss of patent exclusivity for Cialis next year.

While Lilly is getting solid sales growth from existing products like cancer drug Erbitux and diabetes treatment Trulicity, the company's pipeline will need to be a big growth engine. Lilly has 18 drugs in late-stage clinical trials. Despite a major disappointment in a recent clinical trial for monoclonal antibody solanezumab as a treatment for Alzheimer's disease, Lilly and partner AstraZeneca have another late-stage candidate for the indication with BACE inhibitor AZD 3293.

Lilly could also give AbbVie a run for its money with baracitinib, which awaits regulatory approval. In a late-stage study, baracitinib was found to be more effective than Humira in treating rheumatoid arthritis.

The dynamics in the pharmaceutical industry can change quickly. Opdivo might not prove to be as successful as expected if newer cancer drugs prove to be more effective. Humira faces challengers that could negatively impact AbbVie's sales. Lilly's other pipeline candidates could flop like solanezumab.