OPEC is expected to decide this week whether or not it will make good on its commitment to cut and cap output in support of oil prices. If it does follow through and implement the agreement, prices could march meaningfully higher in the years ahead, which would be a boon for oil stocks. That said, some oil stocks can thrive even if OPEC does nothing -- or if the agreement does not work -- because they have repositioned their operations to run on $50 oil, which makes these the top oil stocks to buy amid an uncertain oil market.

Repositioned and ready for any oil market

Oil giant ConocoPhillips (NYSE:COP) has undergone a dramatic transformation over the past couple of years. It went from needing $75 oil just to break even on funding the dividend and maintenance capital expenditures to a company that can do just fine with $50 oil. One of the drivers of that shift was its ability to cut costs dramatically. Because of those efforts, the company is expected to see explosive growth in cash flow from operations next year, which could rocket 190%, according to its estimates. That cash flow gives it the capital needed to execute a returns-driven growth plan.

At the heart of ConocoPhillips' go-forward plan is an aim to grow production on a per-share basis by following five priorities: 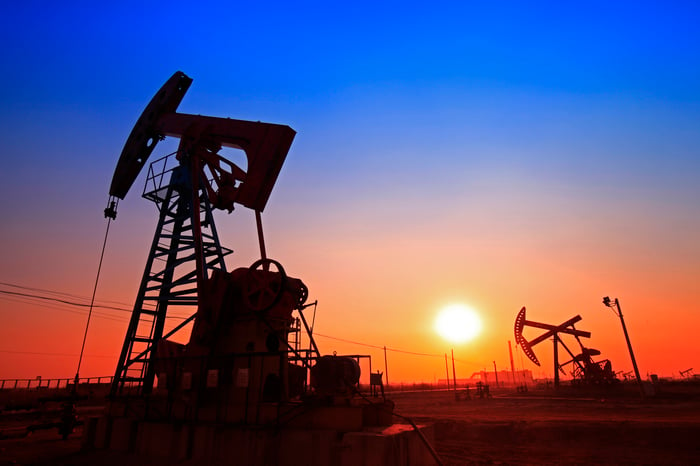 At $50 oil, this plan should allow the company to achieve all five priorities, including providing cash flow for funding enough growth capex to increase output by up to 2% annually. Furthermore, given the focus on overall returns as opposed to just growth, this formula should produce a 5% to 10% annual total return for shareholders.

This plan has plenty of upside potential if oil rises. For example, at $60 oil ConocoPhillips can meet all of its objectives while boosting output by 4% annually. That growth -- when combined with dividends and additional share repurchases -- could yield an annual total return of 10% to 15% per year. That is abundant growth for a company of its gargantuan size.

North American E&P Devon Energy (NYSE:DVN) is also anticipating a windfall of cash flow in 2017, thanks to efficiency gains and its ability to cut costs. According to its assumptions of $55 oil and $3 natural gas, cash flow will more than double next year to $2.5 billion. That capital will provide Devon with enough money to deliver low- to mid-single-digit growth in overall production next year, while oil output increases by the low double digits.

That growth would put the company in the position for an even stronger showing in 2018. Under its current assumptions of $60 oil and $3.25 gas, cash flow would balloon to $3.5 billion, which is more than 200% above what it generated in 2016. That said, even if oil does not reach those levels, Devon still has the potential to produce gobs of cash flow and fuel healthy production growth for the foreseeable future.

Leading shale producer EOG Resources (NYSE:EOG) spent the bulk of the oil market downturn focused on transforming its drilling operations. Its aim was to get drilling costs down so that it could thrive at $40 oil over the long term. EOG accomplished that goal by creating a vast inventory of premium drilling locations, which are those that can generate a 30% after-tax rate of return at $40 oil.

With that goal complete, EOG Resources is ready to resume ramping up its oil output next year. Under its current outlook, the company can deliver 15% compound annual growth in oil production through 2020 at just $50 oil. Furthermore, like ConocoPhillips, EOG can achieve that growth and pay its dividend while remaining within cash flow starting next year. Meanwhile, if oil rises to $60, EOG Resources can grow even faster, with it forecasting 25% annual production growth through 2020 at that oil price. Suffice it to say that investors looking for oil-fueled growth above all else should seriously consider EOG Resources.

All three of these companies have pivoted their businesses to run at lower oil prices. Because of that, they will generate a substantial amount of cash flow next year at $50 oil, which gives them ample capital to use to the benefit of their investors. Furthermore, because of their ability to thrive at lower oil prices, these companies have leveraged upside should prices rise. It is this unique combination that makes them the top oil stocks to buy in what's still a very uncertain market.