Domino's (NYSE:DPZ) has built a surprisingly resilient business around the idea that its acceptable pizza can be really easily obtained.

Back in the 1980s and early 1990s, that led the chain to offer its famous guarantee that your pizza would be delivered in 30 minutes or less, otherwise it would be free. That offer was scrapped in 1993 amid consumer complaints that it led drivers to be reckless.

Now, as it competes with Papa John's (NASDAQ: PZZA) and YUM! Brands' Pizza Hut for the seemingly endless market of people who don't live near a decent local pizza place, Domino's has worked to evolve how people get pizza. That has included its innovative and often-copied Pizza Tracker, which lets people know the status of their order, and less-useful ideas like no-click ordering, text ordering, and ordering via emoji.

It's a mix of trying to stand out in a field where it not only competes with national competitors and local places, but also fast-casual custom pizza chains that have been growing in number and popularity. Domino's is not always serious when it launches a new delivery stunt, but mixed in with the cries for attention are ideas that may eventually have a meaningful business impact. 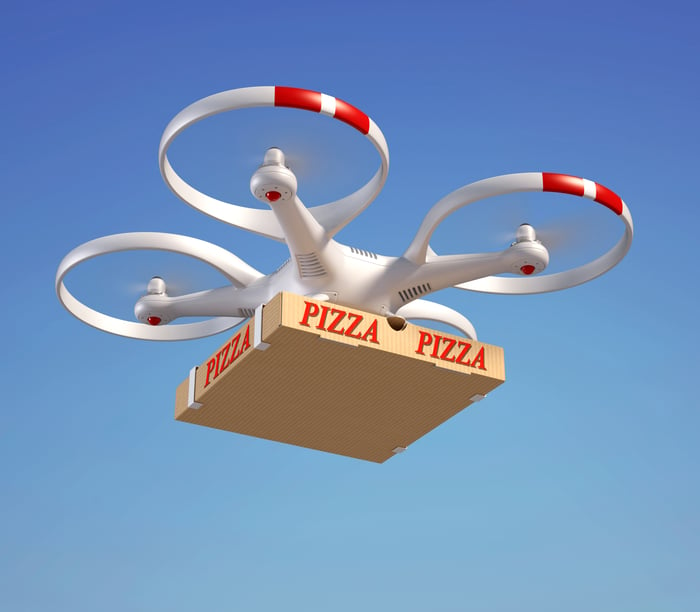 This is not Domino's drone. Image Source: Getty Images.

It's worth noting that while the chain has in recent years embraced some very silly gimmicks, like the aforementioned emoji-based ordering, it has also been growing at a staggering rate. Same-store sales in the United States have grown for 22 straight quarters (13% in Q3 2016) and an astounding 92 consecutive quarters for the chain's international locations (6.6% in the most recent quarter).

This suggests that customers embrace Domino's actual innovation and are amused by its showier attempts at getting attention. Its latest efforts fall somewhere in between. Drone delivery, which its master franchisee in New Zealand has been testing, may one day be a viable tool. A delivery method being tested by the company in Japan -- strapping pizzas to the back of a reindeer or having the reindeer pull a sled with the pizzas -- can't be considered anything other than a silly (albeit entertaining) publicity stunt. The reindeer-based delivery test, which was shown in a video from the company posted by CNBC, has about as much possibility of becoming a reality as Santa Claus taking over Domino's as CEO. Drone delivery, however, has more possibilities and other restaurants, including Chipotle (NYSE: CMG), have at least tested it, though practical implementation remains perhaps years away.

In New Zealand, the company's master franchise operator, Domino's Pizza Enterprises Limited, partnered with drone company Flirtey to successfully deliver a Peri-Peri Chicken Pizza and a Chicken and Cranberry Pizza earlier this month. The unmanned aerial vehicle was controlled using GPS navigation, overseen by "a team of drone experts and a qualified and experienced drone pilot," the company said in a press release.

"We invested in this partnership, and technology, because we believe drone delivery will be an essential component of our pizza deliveries, so even more customers can receive the freshest, hottest pizza we can offer," the franchise operator's CEO, Don Meij, said.

The two companies spent three months working together testing the technology and working with New Zealand's government before completing the successful trial. Meij explained that drone delivery "offers the promise of safer, faster deliveries to an expanded delivery area, meaning more customers can expect to receive a freshly made order within our ultimate target of 10 minutes."

That's an aggressive goal that remains a long way away, but Domino's is attracted to drones for the same reasons Chipotle and Amazon are. "They can avoid traffic congestion and traffic lights, and safely reduce the delivery time and distance by traveling directly to customers' homes," Meij said. "This is the future." Domino's is also looking at drone delivery in Australia, Belgium, France, The Netherlands, Japan, and Germany.

Is drone delivery going to be a thing?

A lot of companies are working on using drones for delivery, but whether it's ever a practical way to deliver a pizza remains to be seen. Still, it's not a crazy idea or a silly gimmick, like strapping pizza warmers to the backs of reindeer, and it may someday be a way for the company to put its products in the hands of consumers.