Concern over declining subscriber numbers and slipping revenue at ESPN have caused the market to take a more cautious outlook on Walt Disney (NYSE:DIS) stock. Even after a post-earnings rebound, shares still trade down roughly 7% year to date while the S&P 500 index has gained 8% during the same period. Disney's lagging performance presents the occasion to size up the media conglomerate as a potential investment.

ESPN does stand as the company's single biggest media asset, and ongoing troubles at the channel and broader media networks segment pose a real threat going forward, but the challenges could also present an opportunity. Even with problems tied to the future of cable, now looks like a great time to buy Disney stock.

Before getting into the elements of Disney's business that have more favorable outlooks, it's worth examining the challenges at the media networks segment in order to understand what the other segments might need to offset. The graph below illustrates segment results for the company's fiscal year ended Oct. 1, 2016.

Disney's media networks segment is by far its largest contributor, representing roughly 43% of sales and 50% of operating income in the last quarter, and ESPN is the division's core asset. While the annual figures don't evidence big difficulties, the company's fourth-quarter results saw revenue fall 3% and operating income dip 8%.

Disney does not break out specific numbers for ESPN, but it likely accounted for at least $10 billion in sales in the last fiscal year. The channel nets $7.21 monthly for each household which receives the channel as part of a cable subscription -- roughly four times as much as the next leading channel -- and also generates advertising revenue. Here's the crux of the problem: ESPN is still losing cable households after shedding more than 11 million subscribers since 2011, which means less ad sales and fewer households to draw carrier fees from. Its content costs are also rising.

While the ESPN situation is legitimate cause for concern, it might not wind up being as bad as it looks if the channel adds back subscribers on streaming services like Dish Network's Sling TV, Sony's PlayStation Vue, and other new streaming entrants. Disney likely won't be able to command affiliate fees that are as high as what it gets on cable, but between the upcoming launch of an over-the-top ESPN that makes use of live sports rights not being utilized on the company's main channel and the possibility of reaching a wider audience with skinny bundles, the network has growth avenues. Even if those opportunities don't pan out as desired, the company's other segments are looking very strong. 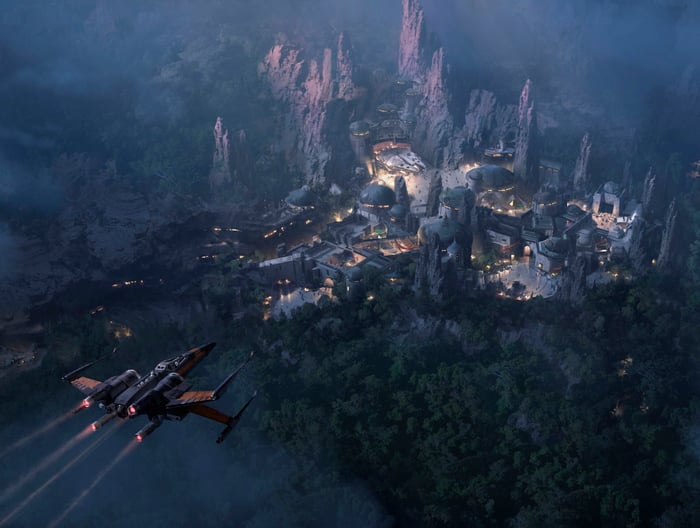 Calendar 2016 will see films from the House of Mouse generate somewhere in the neighborhood of $8 billion in global ticket sales, shattering Comcast's record 2015 take of $6.89 billion and showing the strength of a franchise model that is still coming into bloom. Disney's catalog of blockbuster franchises is too deep to list here, but with Star Wars, the Marvel Cinematic Universe, Pixar films, Disney Animation hits like Frozen and Zootopia, a trove of animated classics to remake, and many others under the same roof, no other media company can match the strength of Disney's entertainment properties. It's also managed to consistently utilize its blockbuster properties to great effect -- no small feat, as evidenced by some recent franchise stumbles from Time Warner and Twenty-First Century Fox.

Disney's incredible strength in franchise management and storytelling can also be expected to have beneficial impacts on its consumer products and theme parks segments. It's no stretch to say that great characters and well-loved stories lead to toy and merchandise sales, and they're also part of the core appeal of its parks and resort destinations.

Disney continues to display great pricing strength at its stateside parks, and the opening of Shanghai Disney and guidance that it will already reach the breakeven point in fiscal 2017 points to the location being a major contributor going forward. The House of Mouse also has other promising parks and resorts projects in the works that could generate huge business. The company's in-development Star Wars Land park will be a massive draw when it opens, and Disney is on track to open a Disney World park based on Fox's massively popular Avatar franchise next summer. Expanding park operations backed by blockbuster properties have the potential to be long-term growth drivers.

Disney doesn't come up much when the topic of great dividend stocks is being discussed, but that could change in the not-too-distant future. The company's payout currently yields 1.45% -- notable, but also significantly below the S&P 500 average yield of roughly 2%. The yield doesn't look stellar at the moment, but the company's payout ratio of less than 24% indicates that there's ample room for payout increases. What's more, the company's decision to boost its payout for five consecutive years even as shares posted substantial capital gains points to a desire to make returned income a bigger part of stock ownership.

The company's low payout ratio looks even more promising in light of the potential for earnings and cash flow growth. Again, trouble at the media networks segment could squeeze the company and send business heading in the wrong direction, but the strength of Disney's other segments present avenues to long-term growth.

Even with the media networks slowdown, the company still managed to grow adjusted earnings per share by 11% in the last fiscal year, and the company's other segments look poised for strong performance. With shares trading at roughly 16.5 times forward earnings estimates, Disney looks to be a great company at a great price.