When you think of Ford Motor Company (NYSE:F), odds are you mostly think of its bread-and-butter F-150 trucks, or maybe its SUVs. You might not think of its small passenger cars -- after all, that's not what Detroit automakers are known for. Because of that, investors are likely to overlook Ford's unveiling of the next-generation Fiesta tonight. Here are a few reasons you should pay attention.

Auto investors know that the vast majority of Ford's profits are generated in the U.S., and mostly by trucks and SUVs. However, it's becoming more and more important that small cars generate better margins -- and that's partly why production of small cars is moving to Mexico. It's also critical for Ford's business in Europe and China that the Fiesta, and other small cars, remain fresh and high-quality. 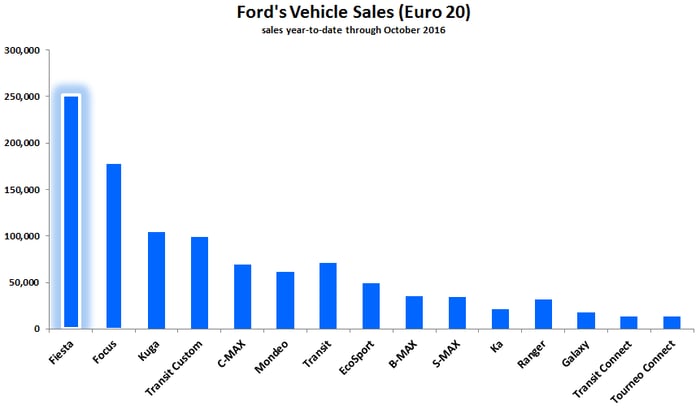 "For decades, we heard criticism from customers that Ford sold its best small cars only in Europe, yet in five short years we've built a reputation [in the U.S.] for making very serious but affordable performance cars with our Focus ST and Fiesta ST one-two punch," said Ford Focus brand manager Jessica Bishop in a recent press release. "Buyers now know Ford is committed to affordable performance."

The U.S. needs a fresh model

The Fiesta is produced all over the world -- Germany, India, Mexico, Taiwan, Thailand, Venezuela, and Vietnam -- and besides in Europe, it's also a big seller in South America and the increasingly important Chinese market.

But while the Fiesta's story is a global one, it's also important for Ford to right the ship in the U.S., and a next-generation model could help stoke the fire. Sales of the Fiesta are down 26.6% in the U.S. through October, the worst decline in Ford's passenger car lineup by 9.5 percentage points.

For starters, the new Fiesta will become more refined, with additional safety systems and a more premium interior and infotainment display. But the real story is that Ford is going to make the Fiesta more profitable by reducing complexity -- probably fewer "orderable combinations" and trim options. 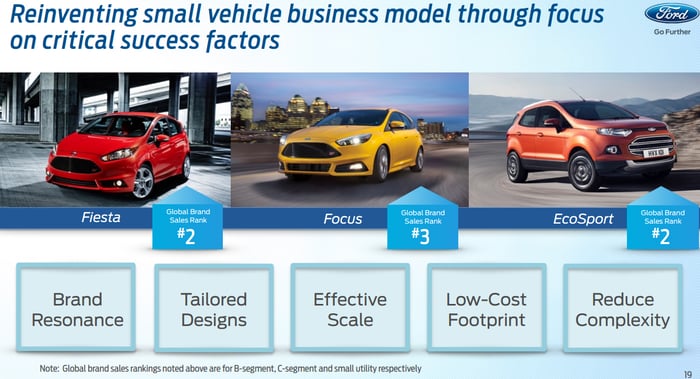 While U.S. investors might overlook the Fiesta's unveiling Tuesday night, the small car's story is extremely important for Ford's market share and sales globally. A fresh U.S. model could help reduce the sales pain in the country at a time when consumers are trading in cars for SUVs, and help offset Brexit-related pain in the UK and Europe as a whole. The Fiesta is more important than most investors think -- but now you know.