Shares of Kandi Technologies Group, Inc. (NASDAQ:KNDI) are up 11% on Tuesday, thanks to receiving a subsidy payment, giving investors a little relief after a rough year that's nearly cut its share price in half. 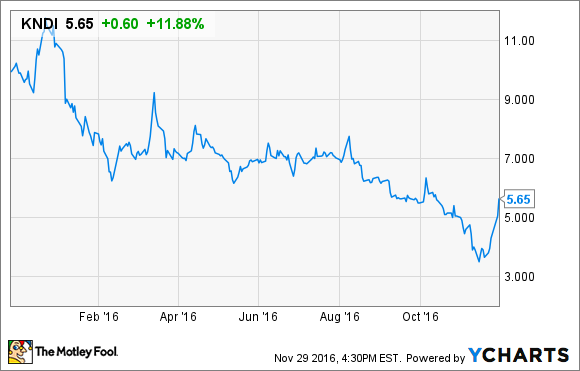 Kandi Technologies wholly owned subsidiary Kandi Electric Vehicles has received a second subsidy payment of RMB 100 million. That equals about $14.5 million. This is the second of three payments that will total RMB 300 million, or roughly $43.4 million.

Not only are these payments significant for a company that posted roughly $200 million in revenue last year, but they probably weren't fully priced into Kandi's stock price because 2015 subsidy payments were unpaid industrywide pending a review. The impact was significant and Kandi CEO, Hu Xiaoming, noted it caused a significant decrease in the company's electric vehicle parts sales.

With the subsidy payments now coming in it will help ensure that the company can continue to research and develop its portfolio of electric vehicles and parts at its Hainan facility. That's great news for the company and its investors, but don't expect as drastic a jump, if any movement at all, for the third and final subsidy payment.