There's no question that Amazon (NASDAQ:AMZN) is the king of cloud computing. Amazon Web Services (AWS), the e-commerce giant's cloud computing arm, generated $3.2 billion of revenue during the third quarter alone, putting the business at an annual run rate well over $10 billion. Few of its major competitors disclose detailed information, but according to Synergy Research, AWS controls 31% of the global cloud infrastructure market, compared to 24% for the next three largest players combined.

For all of the success AWS has achieved, it's not exactly a simple service. Amazon likes to brag about how AWS is constantly adding new features, but those features present an overwhelming array of options for developers. Niche players have popped up in recent years in an effort to make the cloud more accessible, allowing customers to spin up virtual servers in minutes without much configuration. DigitalOcean, a start-up founded in 2011, is one of the most prominent examples.

DigitalOcean offers five standard virtual private server options, with fixed compute, memory, and storage, and a set of configurations that customers can use to install applications like Wordpress instantly. In a few minutes, a fully functional virtual server is ready to go, with minimal effort on the part of the customer. The cheapest plan is just $5 per month, with resources sufficient for basic use cases. This business model has proven successful for the company. DigitalOcean claimed in August that it had 700,000 customers, compared to around 1 million for AWS.

Given DigitalOcean's success, it should come as no surprise that Amazon is going after the company. At the AWS re:Invent conference currently taking place, Amazon introduced a new service called Lightsail, essentially a carbon copy of DigitalOcean. While AWS has been leading the way in many areas over the years, this is a case where Amazon is straight-up copying a competitor. 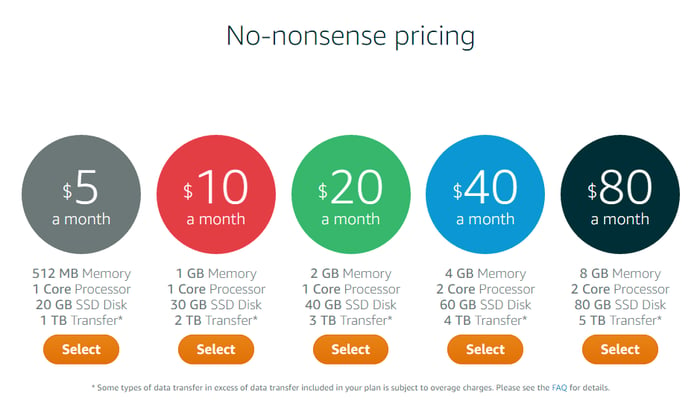 For Amazon, Lightsail will act as a gateway into AWS. The service is dead simple, just like DigitalOcean, but allows for easy integration with other AWS services. Lightsail lowers the barrier to entry into the cloud, both due to its price and ease of use, while funneling customers who outgrow the service into AWS.

Amazon's largest competitors, including Microsoft, Alphabet, and IBM, don't offer the simplicity that DigitalOcean and Lightsail provide. Given Amazon's push into DigitalOcean's turf, I wouldn't be surprised to see all three eventually offer a similar option.

One possible downside for Amazon is that Lightsail could drive some AWS users with basic needs into a lower-cost product. But given the success of DigitalOcean, that's likely a risk worth taking. Despite its size, AWS is still growing at an impressive pace. In order to keep growing, Amazon needs to offer what cloud computing users want. DigitalOcean's base of 700,000 customers is a big vote for simplicity.

Moving in both directions

While Lightsail represents a move to make the cloud simpler, Amazon has also added a slew of new features to AWS that make the platform even more packed. A new analytics service called Athena allows customers to pay for only the queries that are run. Various artificial intelligence services, including Lex, Polly, and Rekognition, provide developers the ability to build conversational interfaces, turn text into speech, and perform deep learning-based image analysis.

Another service, called Snowmobile, is literally a 45-foot-long ruggedized shipping container pulled by a semi-trailer truck that allows massive amounts of data to be physically transferred to AWS. Amazon is dead set on making sure that organizations with massive data needs can easily move to its cloud, even if it takes a giant truck to do it.

All of these features will be useful for AWS customers, but Lightsail has the potential to bring thousands of new customers into the AWS ecosystem. Competition will be fierce, with DigitalOcean already an established player and other cloud computing providers likely to jump into the fray. But Amazon has never shown hesitation cutting prices to the bone in order to drive growth.