Crude oil prices spiked today in the wake of a historic agreement among OPEC members to cut their output by 1.2 million barrels per day, wiping out about 1% of global production. News of the deal sent crude prices spiking more than 8% to around $50 per barrel. Those higher prices fueled a massive rally in the oil sector, including double-digit rallies in megacap producers Hess (HES 0.96%), Devon Energy (DVN 3.15%), Anadarko Petroleum (APC), ConocoPhillips (COP 1.86%), and EOG Resources (EOG 0.46%): 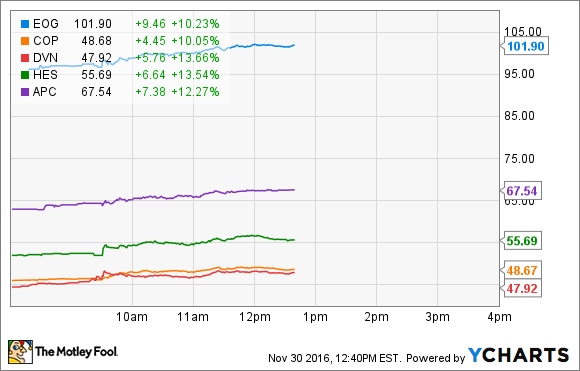 For leading shale producer EOG Resources, the rise to $50 a barrel is all it needs to deliver exceptional long-term results. Thanks to a growing inventory of premium shale wells, which are those that can achieve a 30% after-tax rate of return at $40 oil, EOG can grow its production by a 15% compound annual growth rate through 2020 and pay its dividend while living within its cash flow. Meanwhile, if the OPEC deal pushes prices even higher, EOG can accelerate its production growth with the ability to boost output by 25% compounded annually over the same time frame at $60 oil.

We see a similar story at Anadarko Petroleum. The diversified producer expects that it can grow its oil production by a 10% compound annual growth rate while living within cash flow over the next five years at $50 oil, thanks to its enormous shale resources and a strong portfolio of offshore projects. Meanwhile, at $60 oil, Anadarko Petroleum sees its production rising by 12% compounded annually over that same time frame.

North America-focused Devon Energy, on the other hand, needs oil a bit higher to fuel its preliminary plans for 2017. Under the company's current assumptions, which it released before the OPEC agreement, Devon had expected crude to average $55 a barrel in 2017. That price point would provide it with enough cash flow to drive double-digit oil growth along with low- to mid-single-digit growth in total production. Furthermore, Devon's preliminary thought was that crude would average $60 a barrel the following year without OPEC's help, providing fuel for "stronger growth in 2018." However, with the OPEC deal now done, oil could rise above those price estimates, enabling Devon to deliver accelerated growth in future years.

Hess has yet to put out a forward growth plan, choosing instead to preserve its balance sheet strength, core operating capabilities, and long-term growth optionality. However, with leading positions in the Bakken and Utica shale plays, as well as substantial offshore discoveries waiting to be unlocked, Hess has plenty of growth ahead of it now that OPEC has likely put a firm floor under oil prices. As a result, Hess will likely boost its capex spending going forward, with the Bakken as perhaps the first place it will add capital.

None of these producers were banking on OPEC to come to their rescue. Instead, each spent the past few years repositioning to run at much lower oil prices going forward. Because of that, these companies have tremendous upside to higher prices, which could be in the forecast thanks to the OPEC deal.