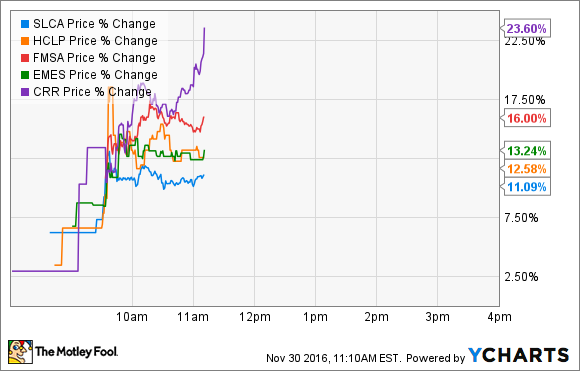 2016 has been the year of redemption for providers of frack sand as the past two years have been absolutely abysmal. Declining rig activity has translated into both lower sand volumes and lower sand prices for deliveries to the oil and gas industry. Pretty much all of the companies here faced some balance sheet troubles, which led Hi-Crush and Emerge to suspend their dividends while U.S. Silica only needed to cut its own.

This year, though, drilling activity has slowly been returning to the oil patch, and as a result, so have sand volumes. This has been a slow trend that has pretty much followed the slow uptick in oil and gas prices. Today's announcement from OPEC that it plans to cut production by 1.2 million barrels helps to accelerate that timetable as the cut has led to higher oil prices today and will hopefully lead to higher prices for a while as supply and demand balance out even more.

With those higher prices, there is the assumption that shale drilling activity will pick back up rather quickly. Unlike other forms of production that can take months or years to develop, a new shale well can go from an undisturbed field to a producing well in a matter of days. This bodes well for shale-oriented producers and, in turn, frack sand providers.

Frack sand could be a very interesting industry as we head into 2017 and beyond. Many of the advances in shale drilling in recent years -- drilling longer horizontal portions of wells, doing more fracking stages per linear foot of horizontal well, and using more sand per individual fracking stage -- all point to sand volumes growing at a pace much faster than overall drilling activity. While there is still a lot of excess capacity in the indsutry right now -- U.S. Silica, Hi Crush, Emerge, and Fairmount all have either idled operations or curtailed expansion plans -- it may not take too long for demand to catch up.

From an investment standpoint, there are still some debt demons that need to be exorcised from many of the balance sheets among this group. It appears, though, that there is a path to that happening as drilling activity looks poised to tick back up again. If this OPEC cut is the real deal, then this could be the catalyst that the oil industry in general and frack sand providers specifically have been looking for.